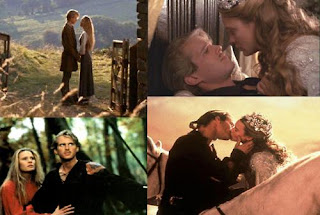 I've read some really fabulous, blush-worthy kissing scenes, and some that seem like maybe they are thrown in for no real reason except the author wants them, and it has me thinking about HOW we like these things to go...

In real life, I sort of just think people ought to be fast and loose with the kisses. Kissing is a nice activity, and the more of it there is in the world, the better... You know, even though I'm not suppose to talk about him, HWMNBMOTI is a REALLY good kisser... compatible kissing is one of those things that contributes greatly to chemistry, yes?

I like unexpected kisses... kisses that catch the participants unaware... impulsive kisses. (especially between long-time friends) 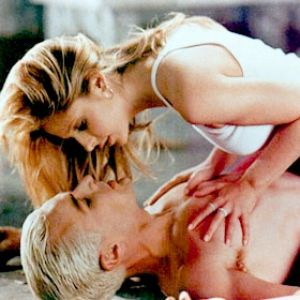 I like forbidden kisses (though not so much those forbidden because somebody is attached—I don't like cheating unless the person cheating is of lesser power in a really imbalanced relationship). But the ones where no one gets hurt but it's secret? (think Cordelia and Xander or Buffy with either of the vamps—in fact Buffy--the show-- did a good job all around on the relationship issues)

I like hard earned kisses—couples who have to overcome obstacles to be together.

What is BORING, is plain old happy couple kissing... It is just where reality and literature diverge, I think

I gotta tell you... I want to FEEL it, not WATCH it. A long description of what the people look like is going to do nothing for me. I want emotion, sensation... maybe a little self-argument. This is very probably ME... I am not particularly visual anyway, and I find what attracts me is usually very different than what attracts most women. I am annoyed by overly good-looking people in almost all cases and have no interest in watching pretty people couple... For this reason, someone describing some ideally gorgeous couple is just going to make me roll my eyes. Call me a cynic.

Where if the description stays with the other senses, I can enjoy it even if they ARE attractive *shifty*

You know what is worse than too much or the wrong kind? 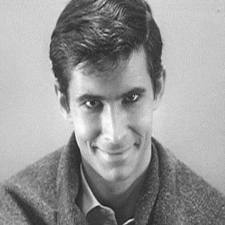 One of my favorite quotes when Breaking Dawn came out was 'another 700 pages where nobody gets laid.'

I am all for sexual tension, but an itch needs to be scratched eventually, yes? And relationships need to develop at a human pace. I have less tolerance of goody-two-shoes than attractiveness, for Pete's sake! All that self denial is for the birds! (It will make a nut job of you, too! Just look at Norman Bates!)


So that's where I stand on the kissing front. What about you? Do you like it? Lots of it? When and how?
Posted by Hart Johnson at 3:00 AM

I like kissing when it's needed. I use kissing to express certain emotions. Like you, I don't like it when they're just thrown in willy-nilly, and oh yeah, the too-good-looking couples is a peeve of mine too. But that's "Hollywood" I guess :o)

I say YAY for Smooches and kisses and risque ones in literature! None of this smackeroo on the cheek and separate beds ala 50's films especially when the protagonists are in love or are attracted to each other!! I do like my stories dripping in sexual tension...!

Hmmm. Your prudery comment has made me think twice about some scenes I've recently cut. :)

I don't think I necessarily notice kissing in books unless I've been teased with it overly long. I like sex in books - well done sex - just enough tension and release - you know who does it brilliantly - Philip Roth - yep the Portnoy's Complaint guy. He is good - I'm listening to his Villages in the car and sometimes I have to pull over and go for a short walk.

Jenny-well EXCELLENT! It is good to be liberal on such fronts I think... even if I'm a little less so than you'd expect...

I've gotta go get me some kisses!!
But you've gone and ruined it by planting Perkins in my brain. So, I'm off to look for a night light instead!
Creepy, scary dude's just a bit much!

As far as pages go, nothing like the build up of a good kiss. Keep the butterflies alive!!
: )

Like everything else, kissing is great when it belongs in the scene. When everyone including the reader knows it's the only way.

Like you I want to feel it all -- the build up, the kiss and the after effects.

Great post. This was fun. Oh, and the Buffy and Spike picture **awesome!**

I'm all for 'em. In books? It can be boring if overdone.

oh, you KNOW I'm all about the kissing. I think my favorite is the one where we've ALL been wanting it to happen so long and... yes! score! *air horns* :D <3

The Princess Bride did it right.
I'd have to say light on the kissing. Make it count.
Don't need it to lead to something else in my reading though. I don't want to read that when I could be doing that, if you know what I mean.

In life I'm a fan. In my writing, I'm sparing. I think in my WIP there are maybe three kisses total. And not a single one of them is exactly appropriate.

As a reader, I don't come across many kisses. I suppose that follows.

I love the well-earned kisses, but I don't like reading an smut.