I don't normally blog on Sundays, but I thought for October it would be nice to add a little promo for friends of mine, as I have had a number of blogger friends with book releases this fall and I haven't paid them proper attention.

Today I thought I'd feature RaShelle Workman's Exiled. RaShelle has been a blogger buddy for a long time and I know enough about her style that I really look forward to her book. Here is the blurb from Goodreads: 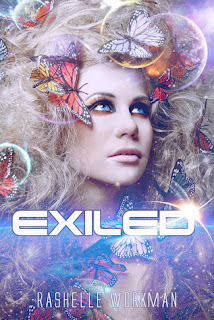 Stubborn, sixteen-year-old Princess Venus of Kelari wants one thing, to become immortal, that is, until someone exiles her to Earth, kills her irrihunter and takes her family.

First she’s got to get home. But before she can return to Kelari, the Gods have commanded her to help an arrogant boy named Michael find his soul mate.

Only she doesn't know the first thing about love.

Rather quickly, her inexperience with human emotion is obscured by other matters—alien-controlled psychotic teens that are out to kill her, and a government group that is set on capturing and dissecting her.

Worst of all, Venus will suffer a painful death-by-poisoning, thanks to Earth’s atmosphere, if she remains on the planet longer than one week.

Still, Venus is a Princess and she's got a plan. Surely, with her help, Michael will fall in love with a human.

But time is running out and Michael is falling for the wrong girl—her.


The publication date is 11/11/11 (how would you LOVE that for the date for your first book?!) And she is working on promotion with another couple great authors (See Dark C.A.R.M.A. here). They are doing a giveaway and promo stuff, by the way, so you should go check them out and maybe you'll win one of these! I think this sounds like a great read and wish RaShelle (and the lot of them) a ton of luck. 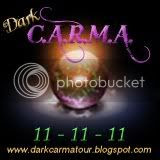 Everybody keep your eyes open for this one!

My fitness stuff is going well. We made Month #1 in our Couch to 5K plan—we are going slower than the published workout, but we are also walking the days we don't do the interval training, so slower but more... I figure that is a beneficial trade. And in my Weight Watchers stuff, I have TWO days on weigh ins... I started on a Thursday, so that is really the weekmark, but online keeps track on Sunday, so I had a weigh in today. I've officially lost 8 pounds. (2.5 weeks in)

So there. I hope you all have a fabulous Sunday!
Posted by Hart Johnson at 12:18 PM

great book cover. will have to check out the book.

I think this is the first time I've commented on a blog other than my daughter's imnothannah. I like how you write and good luck to your friend's new book. You are a good friend by taking the time to give her that little excerpt. Interesting.

And I have the honor of hosting RaShelle on her release day!

That book cover is beautiful.

Lissa-It IS a great cover, isn't it?! On good reads there is a cover contest you can even vote for it.

Coleen! I'm honored to be your first! And thank you so much!

Alex-you lucky bastard! (and I mean that in the nice, Monty Python way)

Mohamed, thank you! It is so much slower than when I was younger, but at least it is the right direction.

RaShelle's cover is STUNNING! I'm so excited for her!

And, thanks so much for putting my book on your blog. It was such a nice surprise. ;D

And congrats on the 8lbs - that's awesome!

Stunning book cover. All the best to Rashelle.

YAY! Hart! What a great start to your diet ... You will look amazing by Christmas and start the new year with a new you.

RaShelle-I'm VERY happy to help out! And thank you!!!

Michael-Oh, I don't think by Christmas will be DONE, but hopefully I will at least fit in warm winter pants--last year I just suffered as nothing fit right but I refused to buy new... (I can be stubborn that way)

I love that cover! It sounds like a really unique book, I look forward to reading it.

And congrats with the fitness goals!

Exiled has such a fascinating cover! That's great of you to send the word along in support of other writers.

I love the cover of Exiled. It's so beautiful. And RaShelle is a dream to work with. I couldn't have wished for a better group of ladies to work with.

The pub date on 'Exiled' sounds like a bit of Karma! Good luck to her and nice of you to help her with some promo!! (btw: I think you followed my blog on a blogfest some time back and I reciprocated. But those things are a bit like a driveby and you may not remember where you were. LOL) Cheers!

That cover is absolutely gorgeous.

PS: I changed my URL and username back to southpaw, but managed to mess up my feeds.!