I bet this is the only blog you see about teeth today, but I have an excuse.

So I just got a deep cleaning. For those of you unaware, this is what happens when you neglect your every six month check-ups and fall back on flossing. You end up needing then to dig in there and do a little cleaning UNDER the gumline.

So don't do that. Floss at least 3 or 4 times a week. Go to the dentist every six months. It may not be your favorite activity, but it is better than the other thing... 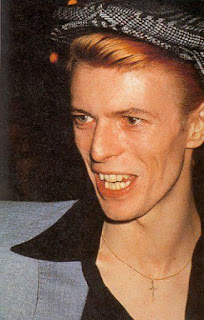 And it's got me thinking... Teeth can be a really striking part of a person's appearance. I remember falling for a guy named Wendell in college because he had the same wonky teeth as David Bowie. He also had the two tone eye thing, but both were blue with brown specs, rather that one of each eye, but never mind. The mouth... that the crooked could appeal to me so much because it reminded me of Bowie...

Some people really love straight, white teeth, and don't we all want them, but that filed eye teeth thing movie stars do? Not for me. Gimme natural edges. I also prefer bigger teeth to smaller teeth, but it's not a deal breaker. 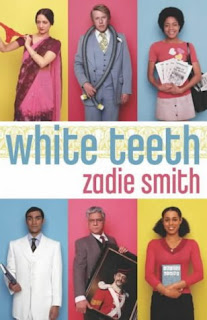 But OTHER than that straight, white teeth thing... how often are teeth mentioned in fiction? I mean grody teeth are shorthand for meth-heads, so there is a genre or two that get into that domain...

There is a Zadie Smith novel actually called white teeth... about a heroine with NO front teeth at the start... I remember liking the book but it's been ages, so I don't remember much about it, though I know white teeth were something associated with class and self confidence.

So how do YOU feel about teeth? Do you include them in your descriptions? What are your favorite tooth mentions in books? Unusual teeth on characters in movies or TV?

But anyway, the IWSG is running with a question these, which is a relief, to be honest. I only have so many blogable events related to my insecurity or anti-insecurity, so this makes things much easier. The question for August is this:

What was your very first piece of writing as an aspiring writer? Where is it now? Collecting dust or has it been published?

But see... The answer depends on emphasis and interpretation...

And I was REALLY a writer when I wrote fan fiction. These were the first novel-length works I actually finished and I shared them as I went. The first of THOSE is this:


The Other Prince: Eileen Snape's Story. It was a terrific dark tale about the sister of a man who got entangled in Voldemort's charm and it was his undoing. So Eileen vows revenge and uses all sorts of illicit magic to create and raise the boy who would be Voldemort's downfall. It was written before Deathly Hallows came out. I started because I had a theory: That to prove themselves to Voldemort, Death Eaters had to kill their own fathers... but by the time I got into it, I loved the writing for writing, remembered what I wanted to do, and woke up the tale that this blog is really about.


The first book I wrote thinking I was going to publish it and be an author was Confluence. 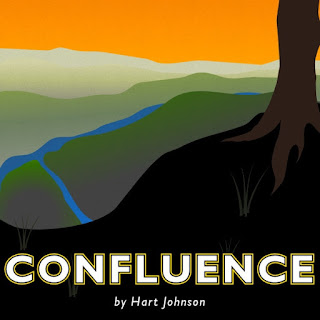 204,000 words at first draft. This tale was about a family that moved to a college town because the father takes a position at the University. The five-year old daughter makes friends with a homeless man who lives in the woods behind their house, unbeknownst to her parents, and the teenaged daughter gets tangled in some teenage stuff. I still love parts of this story, but I tried to do too much. It could be three books. The teenager, Jessie, trapped me. See, her voice was so fun that I started adding to the story and it just got way too complicated. I think Jessie's story, and Trish (the mom) and Hannah's stories are separate. I'd like to get back to them, but as of now, they are behind several “less to do to ready them” tales.

So go check out what other aspiring authors did first...