Miranda waited impatiently at the stop light, blowing a breath of air through her bangs to try to cut the heat. If she could just get into traffic, the breeze would help mitigate her broken air conditioner situation, but there seemed to be a lot more traffic than normal. The car in front of her edged out and she took first position at the intersection. Traffic crawled in both directions as far as she could see, so when the nearest light changed, stopping traffic entirely, she took the chance to edge the nose of her car into the small space between two cars in the line. It hardly counted as cutting anybody off, since all she really wanted to do was cross traffic to the left turn lane, which only had one car waiting to turn.
The car stopped far enough back to let Miranda cross and once in the left turn lane she found a break in the oncoming traffic to steal her turn. She breathed a sigh of relief, but was still confused as to what the heck was going on. Half these people seemed to be texting while they drove. More than half.
The rest of the drive downtown didn't improve matters. As she approached the city center pedestrians joined the cars in their inexplicable swarming.
“Geez, was there a parade or something nobody told me about? A celebrity in town? What is this shit.”
There was nobody there to answer, but since she was used to that. Nobody responded to her regular directing of other drivers, either.
It was a ridiculous amount of traffic. All she needed to do was get to the bank and return a pair of library books, but clusters of people were stopped in the stupidest of places, all agog at their phones.
She spun the radio dial for some explanation, but she wasn't even sure which stations were local. Normally she listened to a CD or NPR, which was great for national and international news, but didn't cover much locally. When she found a station that sounded like news she stopped turning.

...Pokemon Go has people across the country exercising...

She turned the dial again.

...craze. more than fifteen million people have downloaded the app and are searching for their Pokemon...

“What the...” She turned on her phone. “Siri, what is Pokemon Go?”
Siri's explanation cleared up everything... except how this had taken over the world overnight when there were so many larger issues. 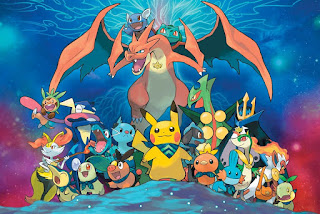 
A string of tumblers seemed to fall into place in her head. “Virtual Valium.” But who would want them all dopey and complacent?