But first, a digression. This grant wiped me out.

Can I TELL you how much I (dis)like the grant-writing process? I mean I get it... there is only so much money for research projects (which is only about half what there was a decade ago before science was systematically dismantled in the US) but there is enough that it is worth being in the race. For starters, if you get GRANT funding, there is a lot more leeway on salaries of the team (which is nice—better than the 'below cost of living 2% the U gave this year becomes possible). And it gives some independence from the department which is very possibly less visionary than my boss [she's sort of a rock star, but they don't 'get her' because she does stuff that is qualitatively DIFFERENT from what everyone else does... in their defense, the RESEARCH people get her—but the other docs really don't, but never mind]

But GADS, I hate the process. The actual writing of it is fairly difficult, but if that was all it was, I think we'd cope... it is the pulling together of thousands of specifically formatted, specific documents for every micro detail that kills me. I spent yesterday on the FREAKING REFERENCES... Do you know why? Because there is this complex set of rules that certain kinds need to have links or reference numbers if they were written after this time, available in that format, have funding of this sort *rolls eyes* It is a NIGHTMARE to figure out what to do.

So I am brain dead.

Instead, I thought I would share two women power links with you that I got this week:


Would You Rather Be a Mermaid or a Whale?

[This must have been publicly shared on Facebook, as it came to me both through personal friends and writer friends who have no connection to each other. I was very impressed with the response when I reposted, both male and female.]

A while back, at the entrance of a gym, there was a picture of a very thin and beautiful woman. The caption was "This summer, do you want to be a mermaid or a whale?"

The story goes, a woman (of clothing size unknown) answered the following way:

"Dear people, whales are always surrounded by friends (dolphins, seals, curious humans), they are sexually active and raise their children with great tenderness.
They entertain like crazy with dolphins and eat lots of prawns. They swim all day and travel to fantastic places like Patagonia, the Barents Sea or the coral reefs of Polynesia.
They sing incredibly well and sometimes even are on cds. They are impressive and dearly loved animals, which everyone defend and admires.

Mermaids do not exist.

But if they existed, they would line up to see a psychologist because of a problem of split personality: woman or fish?
They would have no sex life and could not bear children.
Yes, they would be lovely, but lonely and sad.
And, who wants a girl that smells like fish by his side?

Without a doubt, I'd rather be a whale.

At a time when the media tells us that only thin is beautiful, I prefer to eat ice cream with my kids, to have dinner with my husband, to eat and drink and have fun with my friends.

We women, we gain weight because we accumulate so much wisdom and knowledge that there isn't enough space in our heads, and it spreads all over our bodies.
We are not fat, we are greatly cultivated.
Every time I see my curves in the mirror, I tell myself: "How amazing am I ?! " 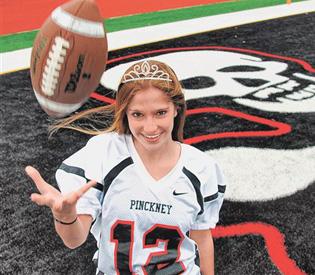 And then More Locally (to me)

We had a state first (is it a national first?) Where a young woman named Brianna who plays for her highschool football team BOTH kicked the winning field goal AND was Homecoming Queen..

I love this. I love that being a jock doesn't put any social stigma on her. I love that a pretty girl loves football enough to go out when there was probably a lot of pressure not to. Pinkney Michigan isn't huge... but it's not tiny, either--it is about 20 minutes north of us. I love that it is a community that lets a young woman be everything she wants to be.

And guess what.... To REWARD me for this grant effort, my boss has given me tomorrow off, so if I am late, I will be here, but that is why--I may wait to blog until I get up Friday. (or maybe not... I intend to be whimsical that way)
Posted by Hart Johnson at 3:00 AM

I read about Brianna and I think she rocks. I also LOVE that message about the whales. So cool.

I think whales are fascinating!

And cool story about Brianna. :)

I love the story about the high school girl. Talk about your over achievers. She's probably an undercover spy as well. :)

LOL! Rock on, Ms. Whimsy~ Good luck w/the grant, and wow. Isn't T. Lynn beautiful? That's funny about the whales and the mermaids and the great cultivation... :D But most of all, geaux Brianna! Fun times. ((hugs)) <3

Some 10 yuears ago, I worked in contract research, funded partly by commercial companies, partly by grants. I enjoyed doing the research, but I got sick and tired of the grant writing. It was a major reason why I quit and joined BigOil, where money is abundant (usually)

PS: Great picture; I prefer the curvy whales; the skinny mermaids are boring >:)

What an awesome post! I took a year of grant writing in college, but I don't think that I'd be able to do it now without working along side of somebody like you for awhile.

I saw that picture on FB too, and really liked it. I love your friend's response, it is great.

Way cool for the Queen Football star. That is a real accomplishment. Last week, our grandson who is on his way to football quarterback stardom (not joking!) was also up for being the homecoming king. He knew it, everybody knew it. What did he do? When being interviewed by the local paper, he told everybody to please instead vote for his friend, a boy with some physical disabilities who would never be a football star. Of course the boy won!

I haven't written about this on my blog yet, but I sure am proud of Tyler.

Have a great week!

I love both stories. I always wanted to be a whale and living here is the next best thing. I still want to drop some pounds but I'll always be curvy, never bony - that was my teenage self - a stick!
And that Brianna rocks! Have a good day tomorrow. Yay!

My job depends on a huge grant that we have to write once a year and submit. Thus far, we've always had the grant renewed and out of that grant comes a huge assistive technology conference and the salaries of three people who would not be able to live otherwise.

Love the mermaid v. whale comparison, and love how the prom queen was also a football player who made a winning kick in a game the same night she was crowned -- while wearing her football uniform. Now that's the kind of prom queen I can respect!

I love that picture. Tara Lynn is gorgeous.

Hope she never gets tackled!
And for the record, I like women with curves and a shape. Stick figure is not a shape.

Thanks so much everyone!

CaH--In my field the 'industry' we could get funding from is Pharma, and i'm not selling my soul down that road... I definitely understand wanting job security though (writing is what I hope eventually serves there)

Kathy-that's a FANTASTIC story about your grandson! I love a sharing nature.

I love the mermaid/whale story and that French model is just beautiful!

Congratulations to Brianna...what a wonderful role model and to you, now that you're done with your grant writing.

My goodness but she is beautiful! I wish I could see MYSELF as beautiful at that size. I would be able to relax a great deal more than I do. I am WAY too hard on myself. It's nice to see a confident curvy woman in the nude. :)