My, What Big Eyes You Have!

Or is that the evil eye? Deathly eyes? Maybe it's just a LOT of eyes...

They say eyes are the window to the soul, so when EVIL is around, those eyes can be SCARY!

Some are so scary they can kill or petrify you!!!

MEDUSA!
The Basilisk!
What are those things with the laser beam eyes? Am I making this up? I could swear there is such a thing.

We've all heard it... 'Don't look it in the eyes!' There are SOME TIMES this advice can save your life!


So What About This Evil Eye?

I totally thought this was just an expression until my best friend married a Greek man. Her mother-in-law used to do protections on her because she was so convinced her AMAZING SON was the desire of every woman, so surely his promised gal NEEDED protecting from all those evil eyes! Now don't get me wrong, Nick is totally a catch—NICE NICE guy, fairly handsome, super supportive... not Johnny Depp though... I'm not sure every woman everywhere was after him... Still, it DID teach us about that evil eye. This would be why everyone in My Big Fat Greek Wedding is spitting on the bride—to protect her.

Theoretically, this is just the beginning of the spells a person could cast by looking at someone... So BEWARE! 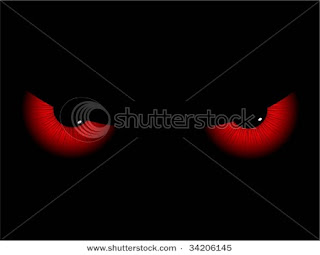 What About EYE COLOR?

Did you know if you google evil eyes, the vast majority are RED? I think that is a Satanic symbolism at work. That, and the fact it isn't a natural color... albino pets aside. And unnatural always causes a physical aversion, though some things more than others...

Even though there are other unnatural shades for eyes, though... red is the farthest from natural. Purple or turquoise could be seen as tweaks of blue, making someone special. I've known people with eyes such a pale brown (hazel?) that they are gold... or nearly yellow or orange... Brown eyes can be so dark as to appear almost black (though true black is pretty scary... WHITE oddly, in addition to blindness, seems to carry a 'vision' ability—lose one sight for another) Red, though,  is the only stand out as 'what the freak is WRONG? That has to be EVIL!'

Finally... Just How Many Eyes Do You Have?

Anything but two and fright is the normal response, friendly Cyclops notwithstanding...

I think what it comes down to is UNNATURAL is what bothers us... it's SCARY...


Did you have the nerve to look? *shivers* Any freaky eyes you can think of, specifically?

Any eyes in books that really creeped you out?  You know... besides Voldemort...
Posted by Hart Johnson at 3:00 AM

You totally need to read the entry for eyes in Diana Wynne Jones' Tough Guide to Fantasyland. :-) Also, YUCK!!!! *shudder*

Hee hee. Creepy. Yes, the eyes have it. It's the eyes that always seem to follow you that creep me out the most.

Bugs' eyes are the best! But I do have creepy eyes first thing in the morning before coffee - cos they're all bleary red! LOL!! So not NAKED at all!

awww! i thought that pic was kinda cute!!!

i'm with you on the freaky eye thing.. it's funny how extreme eye color of a natural sort is seen as exceptionally attractive but unnatural eyes are scary.

to me the entire human eye being solid black or solid white is the scariest! or cartoon eyes that have no pupil.
oooh! or cat-eye contacts!
eeks!

I love black "eyed" peas...both the legume and the band of the same name.

I know true purple eye color can happen with an eye injury, and the blood mixing with the color to make a true purple. But obvs, that's not normal or common

Those are some SCARY eyes, Hart. Love it. ;D

I have noticed most evil eyes are red. Oh, did you see the Cyclops shark on tv? :)

Oh gross! I looked at the first photo on that link you evilly posted and quickly clicked back out. That was a spider's eyes! I don't need to see a close-up of no spider eyes!

Jenny-yeah, mine are a little puffy most mornings... scary!

Vic-You like the spider eyes? *shivers* I am with you on the cat's eyes, though! good for cats. Creepy for people!

Michael-teehee. You're not alone there!

Ciara-I DID see the cyclops shark--but on Facebook. Weird, though!

Helena-yeah, I never want to be close enough for that view!

Had to click over--cool eyes! But I wouldn't have wanted to see them that close in person. :)

I knew someone who wore purple contacts on occasion. Now those were freaky!

Goat eyes freak me out. There. I said it. I do not like goats because their eyes are creepy. I've never told anyone. Shhh!

But seriously, I've stuck the evil eye charm onto on all kinds of stuff. There's one up on my blog, 24/7. Down in the sidebar and up on the favicon. My business card? Yup. Can't hurt to have some protection. hehe.

Real reason: I like blue and I think they're cool. ;)

found you from Insecure writers group and loved the name of your blog so had to check it out. I found "don't look it in the eyes," was also useful advice many years ago in college when dealing with drunk men.

I think it's interesting that people use eyes as scary when a lot of girls actually say that they love the color of a boy's eyes, when some boys don't even notice that detail. I have to say that too many eyes on a spider or bug freak me out. Yuk!