Scared of the Dark

I thought maybe I'd do a week of scary or fright related stuff leading up the Halloween. So there.

I have a confession. I slept with a nightlight far later than a normal kid. I was terrified of the dark... the thing under the bed... the thing in the closet. I'm not sure this was strictly an overactive imagination. In fact I've never thought of myself as particularly imaginative... even now... writing books... I think my creativity is more a puzzle-master thing—pulling odd stuff together and mixing it up originally. I could never be a world-builder. 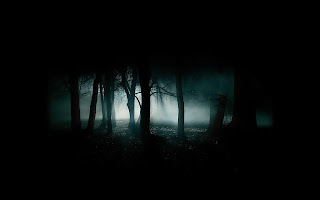 But that DARK. What is it about the DARK? Why is the scariest thing for many people actually an ABSENCE of something.

I mean rationally, there is nothing in the dark that isn't also there in the light...

The answer: BUT YOU DON'T KNOW!!! Anything COULD be there... something could be there that would be ten TIMES as scary if the light was on... it might be just out of reach. Right there in front of you!

As an older kid, I was one of those who liked to sit around with a couple friends working ourselves into frights with 'what ifs'. It was a thrill to be scared. Ghost stories tended to be my favorite, I think because of the paranormal entities, ghosts are the only one I actually mostly believe in. Speculation on werewolves and vampires didn't scare me much because I don't buy it, and stories about escaped murderers were TOO scary. Ghosts were just right... still are.

So how do we carry this into writing... how might we SCARE our readers?

(is my rotten streak showing?)

I think this ABSENCE of information... the working up the possibilities... is far more tense... can carry the reader on adrenaline for a lot longer than REALLY showing it. Maybe there is a story the MC hears... just rumors... Maybe pair the rumor with an ordinary event... a branch tapping or a faucet dripping... pair the ideas a second time, then DROP the story... you don't need it anymore. You just increase the frequency of noticing the ordinary event. (repetition is SCARY—think about The Shining, with both 'Redrum' or 'All work and no play makes Jack a dull boy'.) 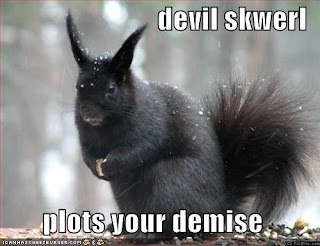 Repetition of SIGHTS can do it too. You see the squirrel. You see it again. Is that squirrel watching me? Then suddenly you have an evil squirrel idea planted. Erm. (okay, maybe it works better with a crow)

The idea is, you aren't telling the reader much. You are planting ideas in an absence of what they mean and THEIR mind is filling in the blanks with scary stuff. 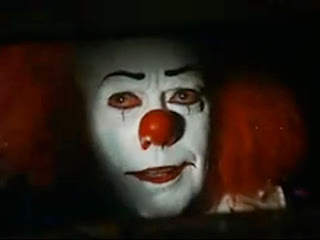 Scariest three quarters of a book I ever read was IT... that book has kid's imaginations killing them. It is a boggart of sorts... changes form to whatever is scariest and it looks like natural causes... King happened to ruin the end of this one by giving Pennywise a form (and a form I find less frightening than that scary-ass clown). I think he should have left it UNKNOWN... Unidentified... because then we might imagine it right outside our window at any time... at least if it was dark.

So next time YOU want to scare somebody... maybe think about how you can plant the idea and then leave your reader in the dark.

I probably shouldn't have read this when I'm tired. I read that as killer cows - possibly just a little less frightening than killer squirrels? Not sure how that would rate c/f a Python bunny.

Awwww but devil skwerl is too cute!

Great post. The dark is full of all kinds of things--good story stuff.

We expect to be frightened by the dark but what about the terrors of the the light.

yes! the unknown is key!
i suspect for an individual who is a master puzzler- who finds comfort in their ability to solve it, prove it, define it- that the inability to do that, to make sense of the world would be the scariest!

for me, i truly believe that i can't ever truly figure out the mysteries of the world. that there is just SO MUCH out there, so much detail and laws of physics and mathematics, and the possibility of such things breaking, that all is unknown.

and unknown can be positive as well as negative.
known negatives are the scariest for me. like you said, murderers- john wayne gacy. gritty reality inadequately guised as something innocuous... hence my terror of clown and crowds! :)

i write a lot of horror. It's super fun and i'm always surprised more people don't because it's so perfect for short stories.
Anyway, of course you were afraid of the dark. It's instinctual. Humans have crap night vision and things used to eat us in the night.

Repetition is totally scary. There was a ghost story I heard once with a little girl in bed, and a disembodied voice she heard getting closer and closer. "Mary, I am coming up the stairs. Mary, I am on the first step. Mary, I am on the second step." It went on in that vein until, naturally, it ended with "Mary, I'm RIGHT IN FRONT OF YOU!" When the repeated phrase ups the tension every time you hear it, that's the best.

I am very very VERY scared. :)

I hated the dark, too. I used to sleep with a light on until I was about sixteen. No joke!

I totally agree with this scaring by omission tact.

IT. I closed it on page six because I was too scared to continue. I still feel creepy just thinking about those six pages.

Hart, Tart, Dark...you are a fan of four letter words aren't you?

I used to be scared of the dark, until I realized that the dark was soothing. Now the light is what I shy away from.

Vic-While I can LOGICALLY know the unknown is good, MAN, I have trouble giving into that. I would often rather take a lesser choice that is a sure thing, just to have it KNOWN... maybe this explains it.

Sarah-HA! A biological explanation that makes sense! And I think maybe short horror is something I could try. I can't normally do short, but I think that sounds like a fun challenge!

Becky-I remember some of those--usually they had joke endings, but they sure worked us up, eh?

Talli-HA! Older than me, even! I gave into the peer pressure and learned to live with the dark.

Carol-I can see that--it really IS a scary beginning. King is a master of that.

Michael-Yes... I am four letter words personified. erm... teehee. I don't mind the spotlight, so long as I don't have to do anything intelligent in it...

My mother claims there was a haunted spot on the road outside her Irish village. Whatever was there was evil and invisible, but on dark nights it terrified animals (people assumed animals could see it) and she herself had a couple frightening experiences there. But during the day, that same spot in the road was just fine and animals didn't freak. So I like to spook myself and believe that at night, ghosts have more power. So being afraid of the dark makes sense, right?

You're right. Sometimes the thought of something is worse than actually being faced with something. The suspense is what really keeps me reading. Creepy post. The dark photo at the top is really scary... and why? I don't know.

You know squirrels are little demons, right? so, that was pretty scary reading for me.

absolutely! This is why I hate swimming in lakes where the water is murky...you just don't know what could be under there and the imagination is a powerful thing.

In my next book, I left my characters in the dark as well!

Honestly, I slept with a light on in the hallway or a nightlight (small Little Mermaid lamp) until a few months ago and I'm 22. The dark can be scary!

I was terrified of the dark as a kid! I still have my moments, in fact. I was the annoying kid at sleepovers who had to have a nightlight on. I'm still the pain in the ass who has to have the bathroom light on in a hotel room when we travel. For me, it's the overactive imagination...that's why I generally can't read scary books or watch horror movies. I get myself all worked up, and it's just not pretty! I wrote a scary scene for a book once and even though I was writing it and knew what was going to happen, my heart was pounding...so yeah, I'll leave those types of books to the non-wusses lol

Helena-OH! I imagine Ireland is full of haunted stuff! Their lore certainly implies it.

Clarissa-Yeah, I think the contrast adds, too... BEING in the dark with the light back there...

Holly *giggles* I love squirrels. Even the evil ones.

Johanna-murky lakes are one of those things I can talk myself into fearing, but I guess I grew up with them... (it is seaweed that really scares me--the stuff LURKING and GRABBING!

Marie-ACK! I can't sleep now with any light. Though the dark can be disorienting. Too funny though, scaring yourself with something you're writing!