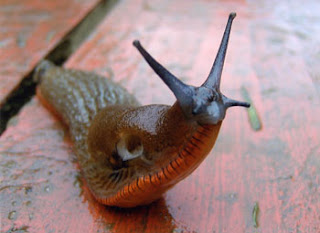 Whereby I become a slug.

I shouldn't be surprised, really. This isn't the first time this has happened. I don't know if y'all remember, but there were several months where Saturday was fitness day, ne? Where I reported my weight loss progress and dieting successes... my fitness triumphs... in three months at the beginning of this year I lost 40 pounds—BUYAH!

Somewhere around October, I quit trying altogether. I started giving in to the food cravings. And SLOWLY, I also gave in to the 4:30 is too early to exercise thing... I had a cold—sleep was more vital than exercise. It was wet, or it was cold... I have and WILL continue to walk to work, but the power walks have dwindled.

I haven't stepped on a scale. I'm afraid.

But I figured it was time to own it. My biology is from the northern tribes and I think there is a message to store a little fat for winter, because it might be long and I must survive it. I am giving in to that until January 1. So there.
Posted by Hart Johnson at 10:06 AM

I think timing is everything...and this is definitely not the right time of year to start an exercise and dieting program! (Yes, I'm an enabler. :) )

how funny! I have the same thing happen to me! I can be so good when it's warm, resisting those surgary, butter laden treats, eating salads and vegetables, shunning bread. But then winter comes, telling me I must gather fat against cold because it's the only way to survive. I started to give in but now I'm fighting back. It isn't easy though; clients bring us stuff, yummy stuff like little petit fours, yogurt pretzels, and chocolate truffles. I've been good this last week but I still can't get up before the sun and do anything remotely resembling exercize in this cold. oh well. only 98 days til Spring :)

I hear ya. But I'm now out of excuses, so I'm back to running this week. Better than nothing, right?

Me: Calories? What are those?

On another, somehow related topic - I was a Lightning Slow snail on Wednesday myself. (? see said post.) Seem to be getting over it though...As in, I am finally catching up to all this holiday nonsense!

As a fellow northern tribeswoman, I salute you.

I really need to get into shape. Bah, Humbug!

There should be a nano for that.

Elizabeth, I think enabling on this particular point is fair game.

MS-that's part of it, isn't it? The healthy stuff in season tastes good, but at the moment I want stuff to make my tummy warm and content.

Su, good for you! If I were to attempt a run at the moment, I'd slip and slide the whole way (and my eliptical is out of batteries, so I COULD but only one speed and no timer...

Carolyn-Lightning slow? I will have to investigate because at the moment, that sounds like an oxymoron...

Words Crafter--well 'in shape' is relative. The place where I am giddy and proud of myself is a 12 or 14-so I am aware for a lot of people those might be the fat-pants...

Good luck! You can do it! You might just inspire me to get back into fitness too...maybe...cake?

So when you begin again, shake up that routine! If you view the whole thing as a 'diet program' rather than a lifestyle change, you'll never stick with it.
And I've yet to see a photo of you where you appeared overweight...

Oh what great Nakedness of wisdom!!! Embrace your northern tribal genetic yumminess!!!! Me I embrace my mother's sturdy thighs and my Cancerian prediliction for having child bearing hips and a tummy - darn it!!! :-)

Have a great Christmas season and deal with the consequences later!

I'm sure you will get back into your fitness regime in due time. Like Jan. 2? That's usually when I start up again. Sometimes our bodies & minds just need a rest from all the overachieving we force ourselves into. Esp. with diet & exercise-- it can backfire if we're too strict about it.

Hart - we're tall as well as northern. A size 12 for us is like a 4 to other women. As for me, I'll switch to mixing my drinks with Sprite Zero and call it a diet. :) (sorry, I'm an enabler. If you want actual fitness motivation, you'll have to ask christy!)
erica

Tami, you used to run, and now you can't. Think of the calories you would be losing, but can't because of that.

Jan 1 is nearly here- you can start the program again, though I do think you don't look overweight at all.

We're all hearing you loud and clear. Diets don't really work. You need to put out all the food you want then cut it in half and enjoy! It works, once you train your greedy tummy to be satisfied with smaller portions. But let's not even think about it now, huh? Gotta lotta Christmas goodies to sample! Wonder if I'll stick to my half portions?

Yes, the northern tribes need to acquire some fat before the long cold winter. Don't worry, it just makes you look healthy >:)

I could've written this post, Hart. I really must get back to exercising before I freeze into this butt in chair, hands on keyboard position.