Halo, Bloggie friends! I haven't had a guest for a while... a month I think... But we've got a good one today! Mark spotted me when Robin Cain came by a couple months back and jumped IMMEDIATELY on board the Naked World Domination Plan! In fact Mark's real life Naked Antics are quite a bit more public than mine! (I'm feeling like a poser) So when he asked about talking to all o y'all fabulous people, I jumped at the chance. So without further ado... Take it away, Mark! 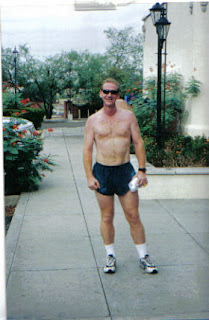 brief bio (author photo (nearly naked, just for you, fabulous readers!) - never released in conjuncture with his book before):

Mark is a Brit stranded in the Arizona desert. He was active athletically until he wrote a book and now his backside is glued to his chair writing more. Blogging naked has always been a passion, in fact I write just about everything in the altogether. No kids at home means I’m in my birthday suit just about all the time, including my nicely walled back courtyard. 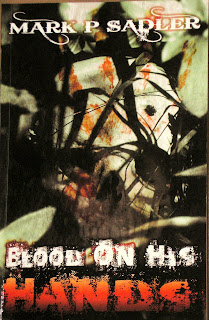 Michael Renton's life seemed to end the moment he pulled the trigger sending his unfaithful wife and her lover into oblivion. On the lam, his journey takes him from rural Oklahoma to the glitz of Las Vegas. He had not however, anticipated the determined tenacity of private investigator Ian Walker, who tracks him down to northern Georgia on to the Appalachian Trail just outside of the sleepy hamlet of Helen. Nine months later, however, when human remains are discovered by a hiker just off the Appalachian Trail will the White County coroner's office make the right decision?


Living With a Non-Reader:

They say opposites attract and I guess that seems to be the case with my wife and I. As an avid reader, I devour books, magazines, cereal boxes - anything with words - have been since the age of three when my pre-school teacher Mum taught me to read.  As a child I spent hours with a flashlight under the sheets reading books well advanced of my tender year. Both parents had an eclectic collection of books. Mother leaned toward science fiction and animal stories, especially dogs, and Father had World War II and true crime. I read Robert Graves, Seigfreid Sassoon, John Wyndhm and Nevil Shute all by the age of ten. Math was the bane of my existence. I mean how can you have a squared! I don’t understand it to this day.  Fractions and percentages, well with a struggle and a calculator I might just get close.

My wife is great with numbers; she remembers them, works with them. She has helped me buy a house, keeps track of insurance thingy stuff and all those related fields but if she cracks four books a year it’s a miracle. She says since I ‘share’ all the stuff I read with her she doesn’t need to. Now I’m happy when she reads and I guess I shouldn’t criticize her choice of novels; I suppose Luanne Rice and Tami Hoag do okay – they have written more than I have that’s for sure, but my wife hasn’t even read my novel! That’s right, you heard it here first. Again I have read portions to her so she knows the story but still, is that asking too much!  I have taken to reading books  aloud to her- I love to do the voices and accents - and we recently read Rebecca (my mother was amazed, “think of that, a woman almost fifty who’d never heard of Manderley”) and she enjoyed it so I’ll have to pick out another one soon.

I shouldn’t complain I suppose. After all when she asked me where I wanted to go for my fiftieth birthday and I chose a nudist resort she didn’t mind at all -  see there are some things we can both agree on!
Posted by Hart Johnson at 3:00 AM

Mark- Mr. Tart hasn't read my stuff either, and has no clue at all what I write, so I hear you! He's ALSO not on board for the Naked World Domination thing--then again, we live in Michigan, so getting naked poses greater challenges! Enjoyed your blog!

Mark-Fun to read; Has your wife been your sounding board, during your writing process? I think as we share details of our WIP, our jobs, our hobbies, our spouses feel they have an extended view and insight in our work. My husband is in the Navy and even though I am not. I do feel it has been a tug of war issue with us. Your book sounds intriguing; My first love has always been mysteries.

Damn, my wife would never agree to the nudist resort! Think she might have something to say if I was nude around the house, too.

Great read! I'm sure Mr TR would agree to a nudist resort and hey, I've always wanted to have the sun shine in on my nether-regions...

My wife doesn't read my stuff either. Well, when I ask she does. But she certainly doesn't hold her breath and pout until I hand my work over.

Then again, I'm competing with Georgette Heyer for her attention. I'm not sure my style appeals to my wife's sensibilities in the same way.

Ellie- I should probably give that a try at my house... talking about the story... I just seem to totally compartmentalize.

Alex-too funny--I spend enough time nude that the hubby isn't shocked, though with the kids, I temper it... never know when one is going to show up with a friend.

Talli-HA! I know, right? though gotta be careful with the sunscreen for a while--those places that have never seen daylight burn easily!

Rusty-that is our problem too--hubby prefers non-fiction, so I am just not his genre.

I must admit living in Arizona does make it a little more comfortable to roam around naked just about anytime of the year, however you can just turn up the heat and stay inside for those of you that live in the artic tundra of Michigan etc!

I would never in a month of Sundays think my wife would go to a nudist resort either Alex, but she gave me what I wanted, and as we where on vacation in Florida (and so had about zero chance of seeing anyone that would know her) she relaxed a little. After one day there (Caliente Resorts, Land-O'Lakes, near Tampa) it felt strange to wear clothes as everyone was naked. It is clothing optional but not for me! Butt-naked 4 days straight. Every try disco dancing naked! WooHoo! The resort is exceptional. Others I have tried do not measure up at all, so I guess we where spoiled from the first attempt at doing the resort thing. Now everytime we go to Florida the wife suggests we go get naked!

I do read chapters aloud to my wife as I write them and get some immediate feed-back so she sees where the story is going. She still seems to think it's a hobby that keeps me home more than the average husband. Now if I could just make some money at this perhaps I can make a believer out of her!

Awwwww but he's so found his true love with his opposite!!

Thanks for the fab and NAKED guest blog Ms Tart - good luck Mr Sadler with this book - I love the cover - took a few more sips of my special coffee to realise it's a skull! Yay! Take care
x

Diane and Kitty, confession time! I was just 45 when the picture was taken and am now actually 54. Unfortunately today's picture would not quite be as tight( my wife would agree as that photo was taken the month I met her) - the nudist resort. For everyone that looks like the but hey you should see some of the bodies atpicture above there are 20 that look like you and I do now! And lets not talk about the over 80 crowd!
Hart - thanks so much for letting me stand in and blog for you today - I had a really good time.

Again, thanks for having me!

Great post, Mark! I feel your pain. Oh, do I feel your pain. Hubby would like to read, he'd just rather be brewing, making wine or chocolate. Okay, so I don't have it all bad, but it would be really great if he would read ONE book I recommended. [He also has yet to read any of my manuscripts to completion.] If you're in Arizona the only advice I can give is this: Wear LOTS of sunblock. ;-)