Halo, fine Bloggie friends! It has ARRIVED! Michael's Harry Potter Holiday Blogfest Short Story-mabob! Now among the parameters was a 500 word goal (I ring in at 526), so the post here is (for me) shortish, but when I wrote it originally, it was about 750 words, so if you want the FULL version (plus a thread of several OTHER Harry Potter-themed fan fiction short stories—including a couple Christmas ones) you can go HERE. The front page of the thread also has a link to my longer fan fiction, if you're so inclined, though I will tell you they are all post-as-you-write, as opposed to the carefully edited things we real writers go for *snort* But seriously... yeah... spell checked, but not rewritten or seriously edited... just so you don't take all this to be 'as good as it gets' from moi...

Anyway... the parameters of the Blogfest included (in addition to that 500 words bit) that we be a character in the story—which makes it first person—a rarity for me. I am also experimenting a bit. I've never written present tense before (I honestly don't usually care for it, but being... magical me... it seemed like it might work, so I thought it would be a good growing experience.)

So there is your background. Now, without further ado... 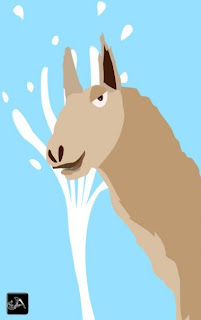 Seventeen years since I set foot in Hogsmeade. A cursebreaker goes where old treasures are found. I ended up in South America—treasures of Incans and Aztecs, protected by very old magic. It suits me, as does my side hobby. Llamas.

Divine creatures, llamas. They always seem to have something to say, yet I haven't found the magic to decipher it. I will.

Unfortunately, my mother has finally gone round the twist... unavoidable, really. I returned to check her into St. Mungos. After a day of paperwork, Hogsmeade seems the only place to sufficiently escape the reality that is straining my aura.

It is deserted—The Three Broomsticks isn't even open for business, but the Hogs Head is more my style anyway. The air is warm and a veiled hag is smoking something reminiscent of socks.

The blue-eyed barman leers but uses a spell instead of his dirty rag, then makes an odd bleating noise.

A pair of goats emerges and looks intently at him.

“Mehehehehe,” he says to them; they go again.

“I only ask because I live in Bolivia. I've nearly worked out something similar with llamas.”

He raises an eyebrow but casts a spell on the hag. I can no longer smell the socks or hear her clearing her nasal passages.

“Charm or potion?” he asks.

“Have you turned into a llama?”

“No friend to do the honors?”

And suddenly there I am. A llama. I look around as the door opens. In comes Albus Dumbledore. He tips his hat at me as if he recognizes me, so I do a small, four-legged curtsy.

“Only to spend Christmas night with my brother.” Albus sounds tired, but hopeful.

“Aberforth, we only have each other.”

A troop of goats enters and eyes Albus, but take a much greater interest in me. I can almost understand them—like when I've traveled in Italy, having only studied French.

The brothers continue to argue. A goat butts me I am herded to the back room.

I help myself. They're kind, generous goats, which means Aberforth is a kind, generous man... if only with his goats. This I understand. I've been alone since booting Stubby Boardman in 1993. Llamas are better company than faithless men, no matter how good-looking.

Once I've had my fill, though, I am too curious to stay. The goats protest but they can't stop me.

Aberforth looks up in surprise; Albus grins. A flick of his wand returns me to myself.

“Miss Panillo, I should have known,” Albus smiles.

“Not at all, sir. It was my first run as a llama. It definitely helps my project. Thank you, Aberforth.”

“Can I pour you both a round before I leave?” 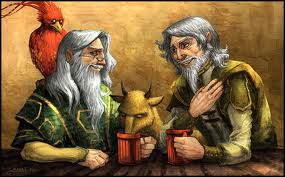 “That would be lovely,” Albus says.

When I leave the bar, the brothers are chatting amicably. Merry Christmas, Brothers Dumbledore.


Notes: Llama image is ME (created by my buddy Joris Ammerlaan: I asked him to make me a llama and *poof* I was a llama!)
Panillo is some approximation of little bread, by which, I meant Tart...

Be sure to check out Michael's blog for the other entries!
Posted by Hart Johnson at 6:00 AM

Wonderful :-D
I didn't get we were supposed to be in the story ourselves... can't be helped :-D (Not going to change it ;-))
http://ketutarwriting.blogspot.com/2010/12/victorian-wizarding-christmas.html

Aww, fantastic job! Love that you used the animagus angle! :)

Great story! And I love the picture of you as a llama...nice job by Joris!

Ketutar--I missed that detail when I first signed up. It isn't what I'd normally do, but as a challenge, it was fun! I will get over to yours shortly!

Jenny-Thank you so much! I've always loved Aberforth and his goats, so I knew if I was in it, too, it had to be as a llama!

Elizabeth--he's wonderful, isn't he? I love his stuff!

I'm speechless. When I asked for something fun, different, and imaginative, you hit in on all accounts.

Using LLamas and goats ... this I would never had expected in a holiday tale. SOOOO fun.

I cracked when you offered to pay more for a clean glass!

Thanks for entering my blogfest, Hart. I really enjoyed your entry.

Nice to see that old guy again; I haven't done any drawing in far too long :(

Great story. I was wondering who the Llama was. Hehehe. I truly enjoyed your entry.
Nancy
N. R. Williams, fantasy author

I've always found llamas to be curiously regal somehow. I truly enjoyed your Harry Potter Christmas gift to us. And the drawing your friend did is magical and fun. Thanks for the smiles, Roland

Michael, thanks so much! I am having a great time checking out all the entries--very fun Blogfest!

Joris-You need to get back to your drawing stuff! I love it! Though I know you are doing a lot of layout and such, but still... gotta keep in practice!

Nancy--thank you! never wonder who the llama is! It is either me or Ralph the Wonder Llama!

Roland, thank you! And I agree on llamas--I love them!

This is probably really good since I didn't understand a word of it (except "poof" which was also in my entry, er, Zach's entry).

I missed the part where we were supposed to be in the story. Then again, I rarely follow the rules even when I know them!
erica

Haha, I love this! Being a llama as an animagus.. absolutely classic. Had me giggling away! Lovely capturing of Dumbledore and his brother as well :)
Em

Very well written. i enjoyed how you put yourself into the story. being turned into an animal must be a strange experience. :)

Oh this was such fun Hart.

Oh, Erica, this is very definitely a Potter books insider to follow--I'm not surprised! Aberforth and his propensity for goats in particular... one line in one book, or you'd never know.

Emma-thank you! If I was REALLY an animagus, i'd want to be a Dolphin, but llamas would be #2 (and I do so love the Dumbledore brothers--the tension seems very real to me.

Summer, thank you! I actually wrote a long one that included James and his friends learning to be animagi, so this 'try the animal on to understand it' stems from that.

Dom-Thanks so much! I'm a little nutty sometimes...

"a veiled hag is smoking something reminiscent of socks" Hahah! Very cute!

How cool and unique! Brilliant!

I love your story!

CA-I was probably too subtle, but that 'hag' is Mundungus... teehee...

Golden Eagle-And thank you to you, too!

I didn't know we were supposed to write in first person... sigh - I need to learn to read rules!

That's one cute llama! ;) Nice to see the Dumbledore bros having a nice Christmas together, and the quirkiness of it is completely fitting.

You look good as a llama! Love the quirkiness and the fact that you used the Dumbledores. You did such a fantastic job! Love the Animagus angle too. SO original and very well-written.

To answer your question on my blog. No, I haven't written any fanfiction publicly. When I like characters I DO enjoy playing around with them for myself. I have thought about Lily and James though because I always thought that the Marauders era was one of the best! (The story that never was) Send me a link to your HP fanfic, if you want, I'd love to read it!

That was a lot of fun. So, do you really study llama's?

Two lines in two books, actually -- DD trying to cheer up Hagrid in PoA, and the fact that the Hog's Head smelled of goats in OotP ;)

Wonderful drawing and unique story. Loved that you put Albus and Aberforth together. Snorted at the hag smoking something that smelled like socks. Great descriptions! :D

Intensely entertaining and so creative. You had to reach for this one but you totally pulled it off.

Best looking llama I have ever seen. Fun story!

Very playful and the picture at the end was icing on the cake!