Consumption: An Interview and review with Allison Dickson

Halo, fine friends! I have a special treat today... Allison Dickson is one of those authors I got to be friends with on Facebook, though common friends. We just kept finding ourselves in the same conversations, usually the non-writing sort, and I found myself agreeing with her often and entertained by her even more. It is ALSO fun to find out one of your writer friends you've made this way writes the dark twisty stuff that I like to read, so when she picked her publication day for her latest book and asked for interested readers, I about pulled a muscle throwing my arm I the air. 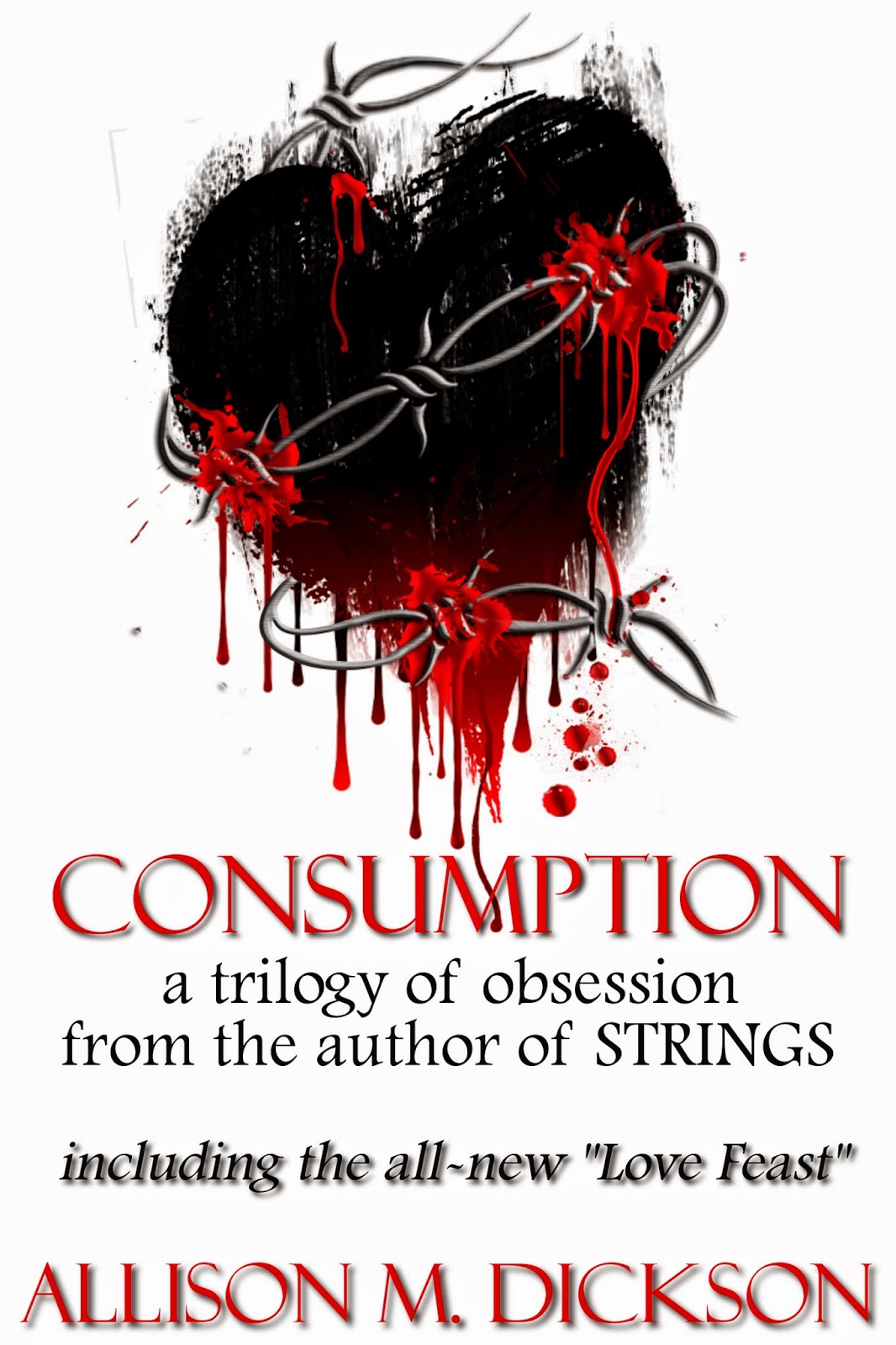 Consumption is actually a trilogy of related novellas, all about really distorted love (I will give a bit of a review after the interview). So after I read, I offered to interview Allison, and here we are!


Tart: So I just have to say, this is one twisted tale. Where did the seeds of this one sprout?

Allison: I’m fascinated by lovesickness, that giddy preoccupation with someone when you feel that unmistakable attraction and you wonder if they feel it for you, and that knife-in-the-pit-of-the-stomach feeling that happens when it doesn’t go as you’d hoped. It’s when the chemistry between two people feels most like an illicit drug of some sort, and it has an element of danger to it, like if I have too much more I may lose myself. I’ve been on that precipice a few times in my life, and I wanted to explore it. A lot of times, I like toying with the idea of strong emotions manifesting themselves in some physical way. The part where Marah talks about how her feelings were taking up actual space inside her was probably one of the truest expressions I’ve made as an author. It makes your chest hurt, like it quite literally is a matter of the heart.


Tart: So in spite of the R rating I would give this, there was something about it that reminded me very much of the X-Files. And I KNOW you have some pop culture LOVES. Do you have pop culture references you feel like have influenced your writing?

Allison: Interestingly enough, I didn’t really make myself part of many pop culture fandoms until only a few years ago, which was when such things really started taking off on the Internet. I was a Harry Potter freak back when it was most popular, but that was before Tumblr and memes in general ruled the day. It was my daughter who got me into Doctor Who, for instance. Now I’m a total Whovian and Sherlock fangirl, and it’s been fun exploring that side of myself and being a part of that cultural conversation. It’s made me feel like a kid again. Breaking Bad is also a more recent influence, but honestly there is SO much great material to draw from these days that I think just the fact of it being there at all is an inspiration, even if I don’t draw directly from it. But I guess if I could throw out two of my favorite cult hits I’ve loved quoting and referencing for most of my adult life, it would be Fight Club and The Big Lebowski. And the polarity of those two things pretty much demonstrates what I deal with inside my head on a daily basis, and what more or less gets splattered onto the page.

Allison: I know it’s probably cliché, but Stephen King is my biggest literary hero. He’s the reason I wanted to become a writer from a very early age, and reading The Dark Tower series as a teenager was particularly life changing. Before then, I read a lot of epic fantasy, but the Tower showed me that rules could be broken, that genres could be expertly bent and woven into something completely wondrous and original. Classics that rate very high with me include Orwell’s 1984, and a lot of things by Robert Heinlein that showed me how fiction can teach valuable lessons about people and societies. But I’m acquiring new heroes and influences every day. Cormac McCarthy, Margaret Atwood, and Gillian Flynn to name a few.


Tart: So this set I would classify as horror, and I know you write some thriller—tell me about the various genres you write in and why.

Allison: Yeah, these Consumption stories really call to my horror side. I’ve always dabbled in the darkness, whether that took the form of traditional horror, science fiction, or mainstream/commercial suspense stuff. I love speculating on future scenarios or presenting the reader with something fantastical when I can, (my upcoming novel THE LAST SUPPER deals heavily in those elements) but I don’t like limiting myself to that. What I’ve learned is that there is plenty of darkness and horror in the real world without really having to go there (though it’s often more fun when you do). Themes about secrets – whether in individuals, marriages, or families – really attract me. I feel like we all live behind a façade of some sort, and my goal as a writer is to get behind those facades and show the ugly along with the good, and force the reader to really question their sympathies and natural tendencies to side with a “white hat” style of hero. I think that kind of exploration tends to happen in darker stories, be they psychological horror tales like my novel STRINGS, or my darkly humorous short stories like “George’s Tonic” or “A Concealed Hand.” At the end of it all, I want to make you feel uncomfortable, like I changed one particular ingredient in your favorite dish, and you have to try and figure out what it is and whether or not you like it (I hope you do).


Tart: And I ALSO know you've recently acquired an agent... You blogged about the process, yes? So maybe share that link? But also tell us a little bit about the book that earned you the agent...

Allison: Oh absolutely! People can read all about the whole agent-getting experience here: http://www.allisonmdickson.com/2014/07/the-obligatory-how-i-got-agent-blog-post.html. KUDZU is a southern suspense novel that centers on the lives of three cousins from rural Georgia and what happened to their lives after the accidental murder of a little girl that they all covered up. Tonya committed the act, Amanda helped her hide the body, and Abel confessed and went away to prison. But there is so much more to it than that. We learn the circumstances behind the murder and really nasty secrets (again with the secrets) this family has been keeping for so long, and the detrimental effects they have had on all involved. The story turns the tables on the reader several times throughout as you jump from one POV to another. I received a lot of agent attention from this one, but Stephanie Kip Rostan at LGR Literary really loved it, and it worked out perfectly because she was the first agent I wanted to query, due to its similar feel to her client Gillian Flynn’s Sharp Objects. That it all worked out according to my deepest hopes and wishes is still unreal very to me right now. Anyone who works in publishing knows things almost never work out like you hope they will, and though I know we’re really just at the beginning of the process and that this book might not sell, I feel like I have good reason to hope now.

Tart: And finally... what would you say keeps you going as a writer—the dream or inspiration, or relief, or support... whatever it is... what keeps you working hard and striving? 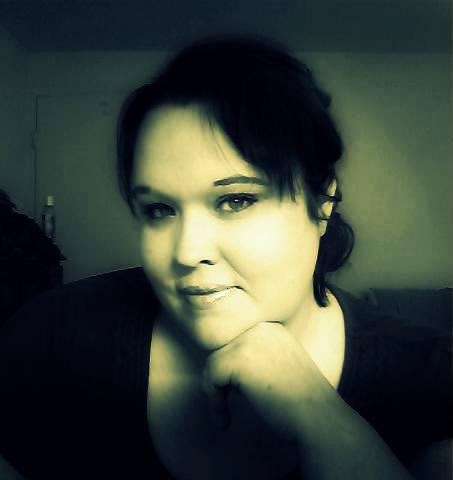 Allison: About eight years ago, my husband and I were going through a trial separation while I worked out some personal demons, but after two years, I decided enough was enough, and I needed to get my head screwed back on straight. The demon I most struggled with was not having a creative passion to fuel me. I’d abandoned my writing, and I had no direction, but I knew if I started nurturing that talent again, I might have a real future. My husband has supported me all the way, and we’ve sacrificed a lot to make it work. I’ve taken jobs outside the house over the years and have also run a freelance editing business to help bring in money in addition to any meager writing income. After seven years, I could have earned a Master’s degree in a field that provides a steady paycheck, but I set out to make myself an expert of sorts in this craft and this business, because I love it so much. Every year has brought me closer and closer to where I want to be, and I’ve also done my best to help others along the way, which has made it especially rewarding. I go through periods of doubt and uncertainty, but I’m too damn stubborn to give up. There is no way I can quit now. It’s who I am. It’s in my DNA.


Review: I really enjoyed (in a twisted way) this story—one of the clever things about it is you get two versions of the same tale, and get a view of where people think they are being clever or tricky, but the other person knows what's going on. It's a nice study in human nature that way. The first part is told in mostly dialog—the MC telling her story to a friend, and I enjoyed it, but my entertainment really increased when I got the second version of the tale. The last third however, is the best—a true, chilling view of the wake of destruction set in motion. It reminded me (as I mentioned) of a rated-R version of an X-Files episode, so if that appeals to you, I think you'll like it.
Posted by Hart Johnson at 3:00 AM

Tart, thanks for the introduction to Allison.

Allison, your book sounds intriguing. Wishing you much success.

I do like X-Files.
Congratulations, Allison. The Big Lebowski - classic!

It sounds like your stories really get under the skin. Kudzu is aptly named since that stuff takes over everything here.

I don't think a writer needs to go into the future or to other worlds to find horror. You're right, there are plenty of scary thoughts and ideas to freak us out right here and now. I hope you do really well with your story Allison. I'm going through a separation at the moment and it's really hurting my creative side but don't give up!

Consumption sounds original and so very smart! I love what you say, Allison, about how feelings can take up space inside you. That's it exactly! And when they crowd out logic caution, things can get dangerous. I'll check out your book.

Thank you for reading, everyone! And thank you to the wonderful Watery Tart for giving me a place to share my rambles. :)