The Crack of Writing


And I don't mean butt crack.

I woke up yesterday... sort of... I actually lay in bed about 90 minute half asleep half awake with various ideas infusing my consciousness... I finished the season's True Detective the night before, so there was that... and I've been watching the Walking Dead, so there was a bit of that... a lot of escaping bizarre things, but I had enough awakeness to stop the action and go back and revise if something looked to dire. Lucid dreams... though I can't do that in a full sleep—only in a half-one. But I woke up with a truly great series idea... I'm very excited. 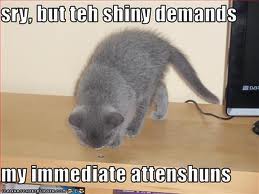 Now if you've been around, you know me and ideas... I have to let them stew a good long time before they are ready to expose to the light, but I tried to write down enough that I won't lose it all... enough to add to as things wind together. I am calling it the Armageddon Games. That is all I will say on the matter.

What I can say though, is that THIS is my favorite thing about writing. These shiny new ideas and the work of planning out a book from them. The actual writing I love, but I have lost some confidence on that part, so it feels harder than it used to. Editing too. But man the ideas are sure fun. I have a fairly large Excel file of ideas. I will never manage to write them all, but if I've lost steam, this is like a jump start. Actually got back to the editing I've been meaning to be working on all month last night.


Now if I could just have someone volunteer to shop and cook, and someone else to clean... then I'd be back on track.

(Sam Memories, that is) My son begins his LAST week of summer vacation as a high school student this week. Last week he registered and yesterday I made him fill out a lot of silly long-shot scholarship forms (they are mostly lottery things, but somebody has to win, right?). I have tried to reinforce that college applications THIS week will be easier than they will after school starts.

He is applying to five schools—three in Michigan, my alma mater (Oregon) and our long shot (Stanford). The latter two would require incredible scholarships, but you never know unless you try, eh? His ACT scores were really strong.

I start to worry here, too. He is sometimes wise, sometimes impulsive, but a year from now, leaving for college, he will not be an adult as most of his peers are. He is sixteen right now. I'm not sure what that means except I think every year at that age is HUGE for maturing a bit more, so he will be 6-12 months behind most of his peers. He's only had his driver's license a few weeks.

At the same time, college was my very favorite time, so I am excited for him to have it on the horizon.
Posted by Hart Johnson at 3:00 AM

Good luck to your son. Hopefully you've imparted enough wisdom on him that his age entering college won't matter.

Sounds like you've got an Attack Novel (one that jumped on you in the middle of the night!) That's the way my zombie book was. :)

I just sent my son off to college a little over a week ago. I'm sure you're checking these out too, but the best scholarships come from the schools they're attending...so many endowments and all. Good luck with it! I know he's going to do great!

I love those shiny new ideas! Good luck with it!

And good luck to your son. College seems like a million years ago to me now - was I ever that young?!

I lucid dream all the time and it always results in a story idea. There's nothing better than a brand new, shiny idea.

Good luck to your son! And to you with your new idea. :)

It is scary sending them off to college but they usually surprise you with what they're capable of.

I keep a big file of ideas, too.

I went to summer college at 16 as well. It was educational in more ways than one: but at least I knew I was an outsider edging my way in territory occupied with all the mature folks you see in those horror Summer Camp films ... emotionally unstable hormones on two legs! I was friendly, laid-back, and learned a bit more of human nature than text book wisdom! :-) He has been raised by you -- he will do well.

Best of luck with your new novel. I am currently in the research mode of my novella, EDISON'S MANSION about a deadly New Year's Party held by a vengeful spirit of the inventor. :-)

Don't you just love when a new book materializes? I woke from a dream and wrote it down too, but it's part of a current novel. Still love the way the mind works.

I have an old Word file with lots of old story ideas. I probably should add to it as I've had lots of other ideas in the interim.

Ah, senior year. A most interesting time for the student.

I don't get any ideas from my lucid or other night-time dreams, but sometimes I have fun with them. The fact is I don't want any more ideas because I already have too much writing to finish.

I think your son will have a great time in college--I was miserable in high school but turned around once I was living in a dorm and on my own. And your son sounds ever so smart and focused. You did a good job, Hart.

Someone to shop, cook, and clean? That would be great for me since those duties have fallen upon my retired ass. Thankfully, my wife doesn't like me to experiment too much with cooking--she'd be happy with rice and beans every night. I get tired of eating the same stuff all the time. A gourmet chef would be a fantastic addition to my household staff which currently is just me.

Best of everything to your son. I hope he uses his college years more wisely than I did. Well, I did have kind of a good time though.

Arlee Bird
A to Z Challenge Co-host
Tossing It Out