So I think our son is experimenting on us.

Let me give you some background.

In 1992 my husband and I adopted a kitty named Lucy because Bernie, our other cat, had lost a sibling and was sad. (I mean who doesn't get their cat a kitten when they are sad?). Lucy was very quirky. A guard cat. A beer thief. And ice cream thief. (really any dairy product) And like ALL the cats I've had as an adult, she was a bathroom cat. And then some. She trained us very thoroughly, that one. 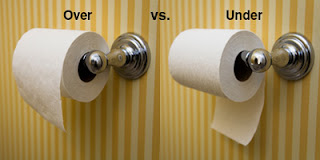 You see, if we left the lid up, we would come in and there she was, poised on the rim, scooping all the toilet water all over the bathroom. (so we became people who put the lid down. Always. And if we looped the toilet paper from over the top she would sit on the toilet and unravel the WHOLE ROLL into a heap on the floor. So we became “from under” people with our toilet paper.


So About This Experiment...

We no longer have Lucy, sadly. But we have maintained those habits. Yet SOMEBODY has begun putting the toilet paper on wrong. Now I ALWAYS still go from under. And I think hubs does too. But I believe my son (nearly 17) has learned to change the toilet paper, yet... HE DOES IT WRONG! But see, I'm proud he's learned to do it. So I usually just enjoy that it wasn't just stacked on the side of the tub or the back of the toilet. But SOMETIMES I can't help myself... and I turn it around.

But YESTERDAY, I KNOW for a fact I ignored that a new roll had been put on backward... yet when I got home someone had switched it... and it occurred to me the son may be testing his dad and I to see how long it takes to flip it... to see WHO flips it.

So today? New roll. And I turned it around.


Does your family have any striking quirks?
Posted by Hart Johnson at 3:00 AM

Every August there is a ridiculously early preseason football game at the hall of fame. I have never been particularly interested in this contest, but every summer for 20+ years I turn it on so I can hear my lovely wife exclaim,"Oh for God's sake, it's too early for football!" I then quietly turn the channel, knowing all is well for another year.

I guess this is a quirk. Probably more of a family superstition. My mom and sister ALWAYS say, be careful, when ending a conversation with any family member. I used to say ALL the time, but realized I didn't want to and stopped. well I say it sometimes. It's like saying be careful will stop all evil from happening.

I can understand switching to under because of a cat, but under is still wrong.
And I think it's great if he is actually experimenting!

Experimenting or just not noticing? Hmmm...

I'm lucky that my former cat and my present one never cared about the bathroom and wouldn't know what to do with a roll of toilet paper. Unfortunately, kitty #2 has the "quirk" (I call it the evil intention) of waking me up extremely early so that I can feed her fresh canned food.

In my family, we are all door closers at night, but doors to every room stay open during the day. If I got up in the morning and a door to a closet or the pantry was open, I'd know something was afoot.

My son loves to sneak up one me and scare the shit out of me. He did it when he was young too, came into the bedroom and just stood by the bed staring until we sensed his presence and opened our eyes. Now he walks into a room so silently I jump out of my skin each time.
Love the toilet paper test though, too funny!

Love it! Trying to think of something equally quirky that we do...my sister and I, at random, surprise each other with 'and the red red robin comes bob-bob-bobbing along' -- nothing to do with seasons or the time of year or anything. It's the element of surprise!

For me my every day is filled with experiments. If we aren't experimenting in life then we must be sleeping and then even that would be a sleep experiment.

Toilet paper over the top is the right way. Your cat is just messing with your minds.

Arlee Bird
A to Z Challenge Co-host
Tossing It Out