Probably my favorite show EVER, I LOVED X-Files.

But you know... it wasn't the alien piece (other than that whole fiasco where Scully discovered her eggs had been harvested *shivers*)... It was two things... The paranormalish stuff, and the conspiracy stuff... From government conspiracy and cover up to businesses modifying stuff, to plain old cover-ups of really strange things...

So I thought I'd share a couple of my very favorites.

(The Field Where I Died)
Or as I've remembered it, the Past-Lives Drink the Kool-ade episode

This episode was the first time I had ever even considered the idea of souls bound across lifetimes, yet Melissa is convinced she and Mulder are husband and wife in several of their lives. Through some fluke, she remembers it all—all her lives. She says to Mulder something like “We were brought together in this life only to pass in crossing, but sometimes I miss you so much.”

I love that idea—that there are souls who travel together across time. The description has people crossing roles, changing relationships. She describes Scully as Mulder's mother, brother, friend. But all of them, always together. There is something really comforting and spooky about that. And there have been a lot of times I've been very convinced it's true. 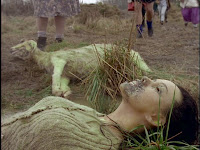 El Mundo Gira
Chupacabra, in Spanish, means goat sucker. But even so, it is meant to MEAN soul sucker, though is most often depicted as a really mutated wild dog form. Illegal immigrants are contracting a … SOMETHING that turns out to be a fast growing fungus, but because they don't know what it is, they attribute it to el Chupacabra. I love the intersection of nature gone awry and superstition. I ALSO love that X-files so often leaves it a little ambiguous how things really happened.


Eve (in all her iterations)
What I love about Eve so much is she is a lesson in 'be careful what you wish for' which is my FAVORITE story moral. Eve was genetically modified to maximize intelligence and strength and then CLONED. She is evil and VERY hard to stop... never mind that at one point there were like 42 of her...

Honorable mention to the episode I found the creepiest:

Home
This backwoods incest story is so thoroughly disturbing that it really stuck with me. *shivers *


I have noticed that for ME anyway, the standout episodes seem to mostly come from season 4... not sure why that is... just an observation.  And any episode could set off the set-up for a full book, separate of the involvement of Mulder and Scully.  Really FABULOUS writing.

I liked the X-files too - perhaps not as fervently as you - I don't remember different episodes for instance but I loved how sexy Muldur was when he was actually quite a dweeb. Interesting. I'm afraid it doesn't have a patch on Dr. Who though. Like that show?

I really liked series one cos it was new and different and suitably creepy. Then I sort of lost interest - more because I tend to get bored very very easily - then I tried to return to it later but then it got abit skewy with Scully getting kidnapped by aliens (I think she was pregnant and had to leave the series for a bit) then Mulder leaving and then these new people turning up...

Anyway!! Mulder and Scully were a most NAKED couple! take care
x

Me, too! I was an X-Files junkie. I remember the opening episode like it was yesterday. I'd just had my first baby and he was colic. Ugh... Escaping with this show helped me so much!

i haven't seen very many of the x-files. i think i'll need to remedy that.

There hasn't been anything like X-Files since. That show was so well written and acted. On a lighter note, remember the one where Scully got silly and flirty? It was a lot of fun. I miss good paranormal programming.

X-Files fan!
Home stuck with everybody. I preferred the stand alone episodes to the mythos as well. The middle years had the best ones.

I loved the x files in the beginning, stopped watching for some reason. might just be around the time I stopped watching tv altogether. those do sound like great episodes. I think I'd really like that first one.

I loved the X-files, own the entire series actually and some of the books.

Home is definitely one of the creepiest episodes. I also liked the ones with the stretchy guy who lived for many, many years. Can't think of the name of it at the moment, but it was season one. And the 6:66 episode! For years when the clock said 6:06, I would think of that episode.

Ohh X-files - what a great show. I miss it.
Do you watch Fringe? If not, you really should, it's like a modern x-files. LOVE IT!!

I only watched one episode of X-Files ever. I'm trying to remember which one. I think the smoking man was in it.

I sense an x-files marathon coming on this weekend! I loved that show!!

I enjoyed X-Files for awhile and then it got too contrived and weird. I did love The Field Where I Died.

The X_files certainly had its moments.

Loved the X-files and I think I remember the Home episode and you're right, it was creepy and I still sometimes think about it. And yes, it was definitely the whole conspiracy thing that really made the show so perfect.