Hurry! Tell all your friends!

Wait. It's possible I should tell YOU first.

See... I have my first ever book release June 5th of this year. And on the SAME day, my friend and mentor, Elizabeth Spann Craig is releasing the first in a new series of hers... Both Cozy Mysteries... both tons of fun! So we thought we'd share the fun with you.


First: What the Heck IS a Cozy Mystery?

Cozy Mysteries are like Mystery-Lite—there is still a dead body (or two), still a mystery to solve, and still lots of twists and turns. But they are low on gore (murder happens off the page), low on violence (happens off the page), low on sex (though not necessarily anti-innuendo or ogling—again, just not on the page) -- the whole thing is kept very PG-- and because the sleuth is an amateur, they are also low on technical forensic or police procedural language, making them very approachable. (and far easier for a non-cop to write)

But in ADDITION, they also tend to have a lot of humor, some quirky characters, a recurring cast, and frequently there is a THEME (Elizabeth's is quilting, mine is gardening).

Now of COURSE we want to promote our new books, but because cozies are so fun, we thought we'd SHARE the fun!

The idea is to think of the craziest, zaniest set-up for a cozy mystery you can—this is strictly for entertainment value—we don't plan to take these ideas and actually write series (though if you think YOU want to, go for it!). But we are asking you to come up with a wacky theme, a zany sleuth, a crazy setting for your OWN Crazy Cozy Mystery idea.

Include:
1)  Sleuth (age, occupation, maybe a little family info)
2)  Sidekick (either friend or foil, but someone who always seems to be around)
3)  Setting (town, city, or other sort of place)
4)  Theme (go nuts)
5)  Twist (be as creative as you like)

Write it up in 150-250 words (so short)--for the blogfest portion anyway—we want people to be able to read a bunch of these without too much burden. Keep the traditions in mind, but we are judging on entertainment value--which we enjoy most, not how realistic it is to make a best seller. We want people to laugh.  WE want to laugh. (so consider those rules more like guidelines, really)


And then please include either our book brief descriptions, a brief word of promo, or a link for people to FIND more if they want to (all related info below).

Prizes: (yes, I said prizes! erm...not extravagant, but we wanted to give you something) Each Elizabeth and I will choose our favorite and BOTH winners will get BOTH books (signed).

We'd love help promoting the blogfest, as well. Feel free to take the button and banner and/or share the Linky Tool below. And I'm sure you will be hearing more about this over the next two months. 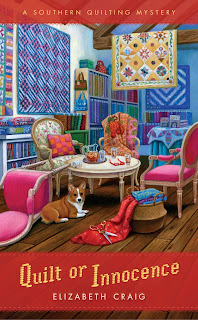 Quilt or Innocence
Beatrice has a lot of gossip to catch up on—especially with the Patchwork Cottage quilt shop about to close. It seems that Judith, the landlord everyone loves to hate, wants to raise the rent, despite being a quilter herself… But when Judith is found dead, the harmless gossip becomes an intricate patchwork of mischievous motives. And it’s up to Beatrice’s expert eye to decipher the pattern and catch the killer, before her life gets sewn up for good.

Elizabeth Spann Craig: Elizabeth writes the Memphis Barbeque series for Penguin/Berkley (as Riley Adams), the Southern Quilting mysteries (2012) for Penguin/NAL, and the Myrtle Clover series for Midnight Ink. She blogs daily at Mystery Writing is Murder, which was named by Writer's Digest as one of the 101 Best Websites for Writers for 2010 and 2011.

As the mother of two, Elizabeth writes on the run as she juggles duties as Girl Scout leader, referees play dates, drives carpools, and is dragged along as a hostage/chaperone on field trips. 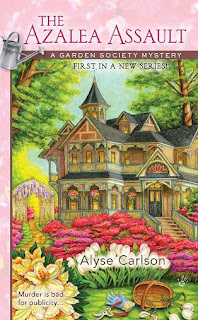 The Azalea Assault
Cam Harris loves her job as public relations manager for the Roanoke Garden Society. It allows her to combine her three loves, spinning the press, showing off her favorite town, and promoting her favorite activity. She's just achieved a huge coup by enlisting Garden Delights, the country's premiere gardening magazine, to feature the exquisite garden of RGS founder, Neil Patrick. She's even managed to enlist world-famous photographer Jean-Jacques Georges. Unfortunately, Jean-Jacques is a first-rate cad—insulting the RGS members and gardening, goosing every woman in the room, and drinking like a lush. It is hardly a surprise when he turns up dead. But when Cam's brother-in-law is accused and her sister begs her to solve the crime, that is when things really get prickly.

Alyse Carlson: Alyse Carlson is the pen name for Hart Johnson who writes books from her bathtub. By day she is an academic researcher at a large midwestern university. She lives with her husband, two teenage children and two fur balls. The dust bunnies don't count. This will be her first published book.

I love the covers of Elizabeth's books. I'll have to pass on that blogfest--got my hands kind of full right now.

I will be mentioning you in my J post on Tossing It Out.


Lee
An A to Z Co-Host
Tossing It Out

To be honest, I'm not a big cozy mystery reader. Mason Canyon has been working hard to change that, lol!

Oh wow!!! Hoorah for your cozy mystery novel about to be let loose moste NAKEDly into the world ready for global domination! Yayyayayayyayay! So excited for you! Take care
x

Looking forward to our release, Hart! Great explanation of a cozy and such a fun blogfest. :) I think our books might be on the same shelf in the mystery section!

I'm so excited for you! And this sounds like a great idea for a blogfest!

Lee-thanks so much for giving a shout! And I get the 'too busy' thing... maybe things will slow down between now and then...

Sia-Oh, come on... they are so much FUN! (but it is good different people have different taste)

Elizabeth--hey, we will! Two C names on the new Cozies!

Christine-thank you! And thanks for signing up!

Congratulations and thanks for the definition of cozy mysteries. I've often wondered but never actually thought to google it.

i'm such a space cadet- you'll remind us of this a couple times before the due date, right?

What a great way to kick off your release!

Huge news! You must be so excited :)
Can't wait to get your book.
Wagging Tales

That's so exciting! Agatha Christie is a cozy mystery. I like that kind.

I'm going to share this one. I hope you get a good turn out. Love a good cozy mystery!

Play off the Page

Right now my Mom's in town and staying with me and I'm crazy busy, but I'll stop back and check out the blog hop and see if I can do it -- sounds like fun. I can certainly write wacky short stuff. And of course when Azalea comes out I'm gonna trumpet it on my blog and buy a copy and hand it around and say I know the writer. That will be cool.

Sounds fun - I should be able to do it by June:)

This is fun. Let's see now. I added my name and site for the cozy - I've got the badge and will put it on my site. I'll write up my idea for a cozy series - do I post it on the 5th? That's the only thing I'm not sure of. And I'll promote the hell out of you two outstanding broads!

I can't help on the 5th because that's my book launch date but I would love to help some other time! Can we have an email chat?

I'd love to help promote . I think it is great that the two of you are teaming up for this. Congratulations to both of you.

Love the covers and love to read cozies :) never got to write them before so this will be fun :) am posting the blogfest in my sidebar and on June 5 I will promote!

Now that I know more about cozy mysteries, I know I would be a lot better at writing them than I would at a traditional 'crime' book. i.e. not having to know all the actual 'stuff' that a real cop would have to know. :) Still, I'm not sure I'm that good at coming up with clever mystery stories... I'm sure people would guess my 'twist' (and who the murderer was) way before it ever got revealed on paper. haha

Congratulations, Hart! This is wonderful news. Love the cover and Elizabeth's book looks fun too!

i found a perfect character so i had to enter. this is great and congratulations on both releases!