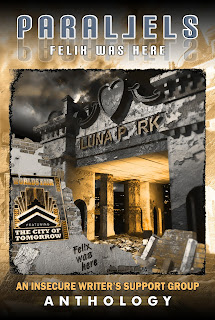 Today, as I promised last week, I am going to share two blurbs and two author bios from the ten of us who had stories chosen for Parallels: Felix Was Here.

I am starting with LG Keltner, as her tale, Felix Was Here, was selected as top story and gave the anthology its name.

L.G. Keltner has been trying to write novels since she was six years old. She’s wanted to be many things over the years, but the dream that survived into adulthood was that of being a writer. She graduated from Drake University in 2008, but she’s still learning every day. L.G. lives in Iowa with her husband and children.

Felix Was Here: Utopia isn’t meant for everyone.

Betty’s family lived in a small Brooklyn apartment when the 1939 World’s Fair offered the nation a stunning vision of the future. A charismatic man worked with the government to make that vision a reality. Six years later, Betty has a nice home, a good husband, and all is right in her world.

When someone casually mentions the name Felix in conversation, everything changes. Betty’s dreams suddenly revolve around a boy named Felix. A boy she doesn’t recognize. Sleep deprived and confused, Betty begins to question the foundation upon which she’s built her idyllic life.

You can find LG at these places:


Next up is Yolanda Renée who says:

At one time Alaska called to me and I answered. I learned to sleep under the midnight sun, survive in below zero temperatures, and hike the Mountain Ranges. I've traveled from Prudhoe Bay to Valdez, and the memories are some of my most valued. The wonders, mysteries, and incredible beauty that is Alaska has never left me and thus now influence my writing.

Despite my adventurous spirit, I achieved my educational goals, married, and I have two wonderful sons. Writing is now my focus, my newest adventure!

Ever-Ton:  Orderly evacuation is the directive to leave our dying world…Salvation awaits in Salus, but only if you meet the requirements.


Leaving the queue of well dressed and military clad residents of Ever-ton, an overweight, and fidgety Quinn Cartier steps up to the ticket counter in sweats.

As a lead engineer, I dedicated my life to feeding them...and now, I’m persona non grata~

Nothing made sense. The government promised all citizens a place in the new world. Why all the hurdles then?

What fate holds for Quinn and all the Unplaceables at Pier 11?

What secret is revealed by a mysterious old woman who disappeared as quickly as she appeared?

Quinn has only one night to change her fate…


You can find Yolanda at:

Five weeks of this and we should be near release!!! So exciting!
Posted by Hart Johnson at 3:00 AM

I like that you're sharing two blurbs a week! I think it's a great way to promote the anthology.

Thanks Hart,
Getting the word out is happening because of your foresight.

These stories sound awesome, I can't wait to see what else there is!

Yay for L.G. and Yolanda! I read Yolanda's story when I beta read it (and LOVED it!) but I look forward to reading L.G.'s story and all the others. :)

I enjoyed reading the descriptions about the stories.

Hi Hart - it's so good to see Yolanda and LG featured here as part of the Parallels anthology ... good luck to you all - cheers Hilary

I LOVED Felix Was Here!

Thanks so much for posting the blurbs! I think both LG's and Yolanda's sound like awesome stories. :)

I'm really looking forward to reading these stories. It's such an honor to be included with the rest of you!

I didn't know you were in this, Hart. Congrats! I love the sound of this anthology and can't wait to read.