Serial Killers are So 1978; Killer SERIALS Are HERE!!!


Do you know who's a lucky girl? ME!
You know why?

Because I have four FABULOUS partners in crime today, ready to SLAY YOU with SERIALS!!! I gave a teaser on Tuesday at Mel's blog about WHY Killer Serials are superior to serial killers (say THAT 10 times fast), but TODAY I want to tell you a LOVE STORY.


Sexy Serials Suck you IN!

Here's a secret... my first book was over 200,000 words. Books typically can have complex characters or a twisty plot. But not both. (and while that first was admittedly not ready for prime time, it hurt SO BAD trying to cut it down)

I WANT IT ALL!

So last year when Susan Kaye Quinn said she was releasing a book SERIALLY, this GIANT lightbulb went off in my head. I didn't HAVE to choose anymore! I could have a fabulous twisty plot AND character development!

And let me tell you what... the OTHER fabulous feature of these feisty fables is ADRENALINE! HOLY COW can they grip you!? Of course for some people that's problematic, but I absolutely ADORE ADRENALINE!


Here are FIVE FABULOUS SERIALS, a couple have free first episodes (including yours truly) and ALL of us are giving away something in the Rafflecopter giveaway below!!! You should go see ALL of us at our blogs, too!!!

Some Killer Serials you should consider sampling

Tiberius has always thought of himself as a normal 10-year-old boy, at least until the day his mother finally decides to tell him about his father, and she tells him things that convince him that one of them is crazy, and he's pretty sure it's not him. That is until the Man with No Eyes shows up and his father falls out of the sky. 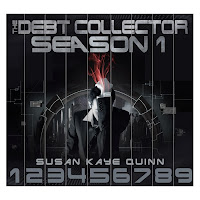 Susan Kaye Quinn: The Debt Collector Series (9 Volumes, 50ish pages each, all complete, (for you risk-averse readers) first one free)

What's your life worth on the open market?
A debt collector can tell you precisely.

EJ Wesley: Moonsong Series (5th coming in December (no end point necessarily planned, but they are coming in 3-book clusters (6th in January) for satisfying individual story arcs; link to the first one FREE)

Jenny Moonsong recently inherited the title of "monster hunter" and an ancient tribal journal/how-to manual passed down by her Apache ancestors. The Moonsongs books follow her adventures as she battles the dark supernatural denizens of the world in a series of action-packed, urban fantasy novelettes.

From a seemingly insignificant word comes the greatest of fairytales... Cinderella is a witch and she's been asked to save a world she never knew existed.

Hart Johnson: A Shot in the Light Series (10 episodes, 100 pages each, 4th available today and the first is free)

Deadliest virus in a century, or a social experiment gone awry? Sidney Knight begins to notice inconsistencies in what people are being told and what's going on as half the population dies of the flu... or is it the vaccine?

So what should you do NOW?  Enter to WIN some of this loot!!!

I love how you explained why serialising something can be a great way of dealing with a mammoth project that's unwieldy and probably doesn't work on its own. :)

This is a great giveaway! WTG to everyone who's participating!

Have a most happy and NAKED Halloween lovely Tart!! Yay for this scary and witchety loot!! Take care
x

Great promo you guys put together!

Great promo-I can't wait to sink my claw, I mean time into these~

Great way to do a promo! I'm actually going to take the big step and do some horror and try Andrew Leon's series because I just adore him as a blogger buddy, though horror is just really not my thing...deep breath...
Tina @ Life is Good

YAY! Glad to see people trying some of these!!!

What great-sounding serials! But I want to buy your serial, Hart, so let the free copies to readers who don't yet know how fabulous your stories are.

Just wanted to stop by and say hello and that I am thinking of you. I am barely blogging right now, but am using today to catch up with old friends. Congrats on all of your new books!