So people are DOING good things and I've had a few good things HAPPEN, so I thought I'd share a little. 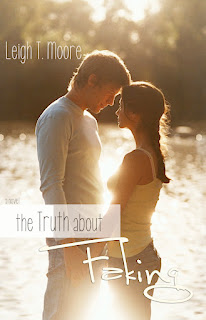 FIRST: My Buddy Leigh Moore has self Published The Truth About Faking!!!

Leigh has ALL KINDS of stuff going on. She has a book coming up through traditional publishing in December, called Rouge which I'm very excited about. But she also has a book that had made the rounds via agent subbing. It had positive feedback, but no full-out bites. Her agent, when they got through that process, recommended she self-publish it, so Leigh decided to take on that MAMMOTH task.

This is a book I had the honor to read in one of its middle iterations. It's a great contemporary young adult tale, focused on romance, but with more real-life issues at the heart of it—questions about how we see ourselves and others... and how others may come across to us when we don't know the whole story. It is a coming of age of sorts, as Harley believes with her whole heart she wants one thing, and finds out over the course of the book just how little she understands about what matters. We grow with her and can appreciate her change in perspective.

I definitely recommend it and wish Leigh a ton of luck! She is doing a guest post here next week, but I thought I'd give a shout before that.


ALSO WIK: My Buddy Joris Ammerlaan has put out his shingle for Bookcovers and Promotional Materials!

Joris is super talented and has done several covers for me. And now he is wanting to actively get into the book cover, promotional materials market, so if you are shopping for a book cover designer, be sure to go over to his site and give his stuff a look. I've known him since he was a wee lad and can totally vouch for his work ethic, professionalism, reliability, and character. 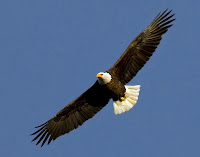 Saturday my friend and Couch to Keg buddy Jackie invited me to go to Michigan's first home game with her. It was PERFECT early season football weather—65 with a breeze. And the game was against Air Force Academy, and there was a military appreciation theme throughout, which was AWESOME. During the National Anthem a bald eagle was released from the top of a press box and circled the field a few times to land down on his handler on the field. I got teary. Bald eagles are so amazing... it reminded me that my daughter and I had seen one just perched on a dead tree by the side of the freeway in Montana. Very cool. Then, as the National Anthem was ending, a stealth bomber did a fly-over—WOW those things are weird.

And of course the writer in me imagines how PERFECT this set-up is... 112,000 people all in one place, easy to block the entrants... some alien space ship could just beam us all up to populate a whole new planet... or something. But whatever the case, it was a GREAT event. I really enjoyed it. Thank you, Jackie!

And finally, yesterday was the Kerrytown Bookfest in Ann Arbor. Ann Arbor has a Farmer's market on the weekend in a section that might be thought of as oldtown—it is the original town square area with brick streets and what NOW are very trendy, high-end shops. The farmer's market occurs outdoors (though the strips of wide sidewalk are covered)--anyway, after the farmers packed up and went, the bookstores and publishers in the region unloaded.

I was really pleased with the high number of little bookstores there really still is in the area. Manymore than I'd thought. Most of them are for niche markets, including the one I was there to sign for, Aunt Agatha's (a mystery bookshop). I was signing with three other authors in my slot, all of them more famous and successful than me (I was the only one with only a single book, and all the others had hard covers). It was nice to really see how it was done, though. Hank Phillipi Ryan was next to me and a real pro. (she is actually Harriet and I LOVE that she is called Hank—she said it was from a college friend that that originated)

My favorite surprise was when I arrived, I found February Grace waiting to meet in person! It was a complete surprise and was wonderful! I love meeting author friends in person, but I think this was the first totally unexpected meeting like that.


So here is hoping the good stuff keeps going for all of us! Have a great week!

Leigh's book sounds amazing! I'd really love to get it in print format, though ;) Still can't get into eBooks.

So happy for beautiful LTM!! And yay for most NAKED bookshops where your are!!

OMGosh, OMGosh, OMGOSH!! I am so excited for Leigh!

Thank you, friends! I'm very happy for Leigh! It's nice to be sharing GOOD stuff!

Lots of good news to be shared! Thanks for keeping us all up to speed. :)

I'm so excited for Leigh. She's one talented writer!

Love your thoughts about aliens... We could call it Alien Game Day.

It was so fun surprising you! I usually don't do stuff like that LOL but by the time I saw your FB post we just decided to get in the car and go for it. So funny that you saw me first. It was such a joy to meet you! <3

I love the cover for The Truth About Faking with the sun backlighting the couple. Good title too. I think I have title envy today. :)

Sounds like you had a great weekend, which you've certainly earned. The bald eagle looks amazing, as does Leigh's book.

You amazing, awesome twin-friend and beta/critter!!! That is the most awesome endorsement I've read. You hit all the high points exactly right! And now I'm getting all misty. It was the first project we ever worked on together... *sniff* (LOL!)

You are the BEST!

I just love those book covers Joris did for you. I'm sure I've said it before. Here's hoping him the best with his biz!

I remember reading about your experience at the game. It sounds like it really was a moving experience on a perfect day.

Cool bookfest and even cooler that you got to meet FG! What a fun surprise! YOU have a super great week! I'm glad to hear it sounds like you're kind of getting going again. ((squeezes)) <3

I'm amazed that many bookstores are still in your area. Our entire county has one, a BAM. And that's not a real bookstore.

I'm am sooooo happy for Leigh! He book sounds awesome!

LTM is the best evah! I call this her kissing book, because it's all romance-y, but I'm really looking forward to Rouge, because it has a stagehand in it! I used to be a stagehand.

I'm sad I missed the Bookfest. But, I'm thrilled for all of the amazing moments you're experiencing through your writing.
Glad you came with me to the football game. Now I'll have nightmares of aliens beaming me up in a stealth bomber spaceship to take me to a new planet. Eek!

Thanks again to everyone for the kind words here! Yes, this is my kissing book, Matt! And yes, that cover is Uh-mazing! I give props to Jolene Perry for that. And I hope you guys like it! (Rouge, too, since my stagehand mentioned it! ;o) <3