So a couple months back Justin Gustainis emailed me and asked if I'd be willing to do a review... I gotta be honest; I'm a bit hesitant on reading books by people I don't know on request—the blogosphere is another matter (I love you guys, so it is a straight time equation), but I didn't know Justin... When I read his pitch, though... I just couldn't resist.

Now this isn't a genre I'd ever read, but it reminded me A LOT of some of the television I watch... It is hard boiled detective meets paranormal camp... it is Men in Black only Vampires, Werewolves and Wizards instead of aliens. 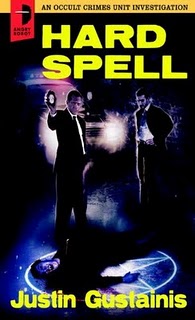 Stan Markowski works for Scranton Pennsylvania's Occult Crime Unit... the department includes a witch, a priest, a rabbi, a handler for a hellhound...

Early in the book there is a gruesome crime scene... a long torture of a wizard... something stolen... and then the Vampire murders start...

Now Vampires in this world aren't ALL horrible...okay, there is remaining bias, but... it isn't illegal to be a Vampire... it is only illegal to kill people, so among consenting adults... and there ARE some...

It turns out the stolen item and the Vampire murders are related... and heading for something TERRIBLE... and our detective is in charge of solving it before that happens...

This was a fabulous combination. I normally get a little annoyed with say... a Raymond Chandler hard boiled... partially because the man is misogynistic, but it is just... too dry... This book maintained the MYSTERY side, but added humor, surprise... and besides that, Markowski has a higher view of women. I mean it's not that he doesn't NOTICE certain... erm... attributes... but he thinks a lot of their intelligence and abilities and he values them (as does Justin, based on how he writes his female characters).

One of the sublime clevernesses was the magic—the book had clever twists on what you think of as traditional spells or protections, but with a twist that makes them seem realistic and modern.

Hmm, sounds like a book I need to read. Mystery, intrigue, magic, mysticism . .

ditto on what dhole said and I also like the cover.

Thanks for a most NAKED review of this fab book! Take care
x

One of my favourite series is The Dresden Files, so magical detective genre sounds right up my ally. :)
Wagging Tales - Blog for Writers

This is a great book review. Hard Spell sounds unique and interesting. Good luck to Justin!!

It sounds great, like something I would like and my husband would read too, which would be amazing since we have so little book crossover.

LOVE the pitch - Men in Black but with a paranormal twist. Sounds like a great book to add to my TBR pile.

Thanks so much for stopping by everyone! It really is a great read. And I think the mix of genres DOES make it appeal to a broader spectrum.

Your disclaimer about the liking the different genres nails it.

Who ya gonna call!? OCU! Thanks for the review.

Great review. Sounds like the writer carefully covered all the bases.

I could hear the clashing of swords in your previous post. You guys are doing it tough in America but unfortunately your problems affect the rest of the world in the trickle down effect. Doesn't look like there'll be any solutions any time soon but the little people are really bleeding.