I’m reading a pretty good book right now… It’s called The Flander’s Panel by Arturo Perez-Reverte. It’s about an art restorer who discovers a secret message in a painting that is the key to a 500-year old murder, and I am LOVING it. But it has got me thinking (always dangerous). How does one navigate material that can’t be taken for granted as part of the reader knowledge base?

I would surmise that most avid readers are pretty smart… and most anyone who reads for pleasure AT ALL, is at least of moderate intelligence. Idiots don’t LIKE books. [note: not EVERYONE who doesn’t like books is an idiot, but the other direction is inevitably true] That said, there are a LOT of forms intelligence can take. There are math brains (like mine), art brains, language brains, wonky twisted brains (I would argue here that I have twisted INTERESTS but that my brain doesn’t work in particularly twisted ways).

And then we all have things that… we’ve just been EXPOSED to… I have expertise in a few odd areas because of jobs I’ve had, people I’ve known, things I’ve read about… These areas of expertise don’t have a darned thing to do with each other (white water rafting, advertising, microbrews, downhill skiing, astrology, Harry Potter…) They just make up the fiber of my experiences and prove I’ve been paying attention as I live my life.

Well SOME people, have expertise in areas that need… more expertise… Music for instance… history, knowledge about PLACES… For me this expertise is probably in psychology—something I use in my writing, but I tend to use it to inform personality, motivation, and relationships rather than explicitly (NaNo novel notwithstanding).

Most readers are willing to learn a little something when they read. In fact I’d argue that any book that doesn’t make me think in SOME form or other is fluff… not that I dislike fluff, but I try to make a point of not reading ONLY fluff. It is a different kind of enjoyment and I honestly like the books better that have some substance… teaching me something is one form that substance can take (the others being deep emotional or intellectual involvement or philosophical questions). But what? 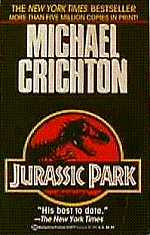 I have to say, there are just some things I don’t want to learn. Tom Clancy’s mechanical workings of submarines, boats, weapons? *yawn* I can’t stomach them, which makes STORIES that could be great (love the movies of his books) into BOOKS I can’t read. I’ve heard similar assessments of the genetic details in Michael Crichton’s Jurassic Park. Now I haven’t read that, but I’ve read a few of Crichton’s novellas and personally, I felt the detail was FINE… so see? It is PROBABLY that I have an interest in biology or genetics, (especially layered on conspiracy theory) but not on mechanics… they are equally complicated, I know equally little about them, but one I am willing to learn, the other I am not.

I would argue both of these (GREAT) authors have lost readers over their technical inclusions, but they have probably also GAINED readers who THRIVE on that stuff (and it adds credibility, so may be necessary to the stories on some level)… but how does one draw the line? What thrills one, might alienate others… the goal seems to be finding the balance in which the largest number is pleased…

I think Perez-Reverte has drawn the line well… his story required expertise in art, history, and chess to write. He has different characters who are invested in the story each have different expertise. The heroine is an art restorer… she knows the art angle… but she is working for an auction house in order to help a man sell the painting, so she has logical people to explain things to in more common terms.

The murder mystery requires history knowledge (which an expert tells her) and chess expertise (so they’ve just found someone to explain). I will learn about ALL of these things and the narrator never once has to step out of the story to tell me because the STORY is playing out in a way that tells me. It’s brilliant. And I believe it is brilliant because I’m not sure I could otherwise MUSTER interests in some of these subjects… what I am invested in, is solving the murder, and so am learning as part of that process…

I guess I just found it good food for thought.
Posted by Hart Johnson at 10:23 AM

You're so right. Think how much better Moby Dick would be without all the harpoon lessons?

I get really rebellious when I'm reading and I think I'm being lectured to: either for my own good (a lecture about being green) or for educational value (harpoons.) But if it's worked in skillfully, I LOVE it. I love little bits of trivia and learning new things...when it's written like a friend sharing something cool with me. Sounds like "The Flanders Panel" nailed it. Art restoration, etc, is really interesting, anyway! Love to learn about that stuff.

I'm reading Lydia Millet's "Oh Pure & Radiant Heart" right now. She cleverly works in historical detail about the atom bomb dropped on Japan in 1945 by including the scientists responsible as three main characters.

Some books (such as this, and yours) thrive on playing with knowledge and history in amusing and innovative ways. The trick is to take a reader who couldn't care less and MAKE THEM CARE, dammit!

P.S. Everyone who doesn't like books IS an idiot.

All the books I've been reading lately are little more than detail, as they're nonfiction biology books. But here goes anyway.

A book crammed with detail--unnecessary detail--is way longer than it should be. A book with a plot centered around something that actually needs to be explained for the story to work, on the other hand, is a different beast.

Dan Brown's stuff tends to come off (to me) like the introductory "get used to the controls" part of a video game. The explanation has to be so obvious that the 4th wall is broken immediately.

So you pretend that didn't just happen, and skip the tutorial and start your game.

Or you get the audiobook and listen to it while you're doing something boring.

Elizabeth-Totally with you on not wanting to be lectured at! It is one of the things that bugs me so much with early American novels (the ones where sex is always fatal). And you may be right about that being why Moby Dick was as hard to read as it was, though I still like Quequeg...

Mark, I will have to check that out. I read a bomb development one at one point but the title is escaping me... I really liked it.

Paul, totally agree--if it is necessary to the story, great, if not *yawn*. I liked Dan Brown's DiVinci code, largely because as a religious skeptic his detail fed into the kind of conspiracy theory I like, but were I to read ANOTHER with the same details it would make me NUTS. (the kind of thing I only need to learn once)