So I failed to give my phase updates, but better late than never, eh?

Phase 2: This was Wednesday and Thursday of last week and boils down to LOTS of meat and veggies and nothing else. And it was surprisingly easy. It shocked me this could be easier than the carb load days, but it was. Figuring out what to eat, eating enough. It was easy easy easy. I made some turkey jerky (a recipe in the book that is super easy) for my snacks—at it wrapped in spinach because the protein veggie combo is what they recommend, though only require at meals. One hard things is this phase has some limits on the veggie list including tomato and salsa, which is one of my go-to “make meat and veggies a meal” and salsa is a dressing free dressing, ifyouknowwhatImean. Starchy vegetables are also off the list (tuber family, squashes), but that doesn’t bug me, as years of Weight Watchers makes me think of those as carbs anyway.

Phase 3: The thinking is hard, but once done the eating was great. By hard I just mean every meal is a different thing so there is a lot more checking for “hey, is this right?” I had some additional challenges that were “me specific”.

First, my work had a service day Friday, so we went to Detroit to do a service project. Then they bought us lunch (are you seeing the challenge?) and we went to the zoo. But I planned well. I know lunch was wraps. I had ordered turkey. So I brought my sprouted bread and moved my sandwich innards to my “allowed” bread. And I brought almonds for morning snack and celery with almond butter for afternoon snack. Done. Success.


Second challenge was harder. My neighbor hosted a little party to watch Harry and Meagan get married. Fancy gorgeous food, nearly none of it compliant. I brought my own veggies, though. And could eat the fruit. And she had marcona almonds which aren’t RAW (as they should be) but I figured were close. My only cheat in the positive was salmon dip (which was made which cream cheese, but hey, at least I at it on veggies rather than crackers) and I had 2 glasses of champagne. But I was MISSING the required protein, so I had to eat that when I got home. The rest of the day I was good, and yesterday was fine. Ironically, Saturday was my best loss day all week.

But that weight loss thing is tricky to think about anyway. My first day (before I started) I was down 3 pounds already… Something I did last weekend dropped weight somehow. So after day one I was up 2 and it dropped again by about 1/3 of a pound a day until my low Sunday morning (down a pound and a half from “pre” and then gained it again overnight, so this morning I was back to my starting weight, though this is the only day this week I didn’t weigh less than same day last week… I know. Complicated. I am going to keep going for the next 3 weeks though. Let that fluke even out.
Posted by Hart Johnson at 1:16 PM 7 comments:

So phase I of this baby was lots of evenly spaced carbs. And one of the diet details I don't remember if I mentioned... I am meant to be eating double portions because I have a lot to lose. Yesterday I had a REALLY hard time with that, probably because I took the day off so had to eat it all in a more compressed time. (like I didn't want a big dinner at 10:30 so I switched order of snack and dinner. This is allowed, but it made dinner too soon after lunch. I just couldn't eat it all.

And yesterday (Day 1) I felt sluggish and lethargic. No fun. And today my hands are killing me. Worst carpal tunnel ever. I think I overused beans as grain (turkey chili for 3 meals in 2 days... and a lot of it). But I don't feel so sluggish today and didn't get a hot flash every meal like I did yesterday. And tomorrow I am on to protein and veggies. So hopefully that will help. I am still counting on this being a process and I am barely started.
Posted by Hart Johnson at 7:26 PM 2 comments:


So this blog has normally been about writing, which is why I've been so scarce. I haven't really been writing. But I am beginning an adventure Monday (yes, that is a euphemism, but I AM motivated). It's about eating. And exercise. And hopefully about overhauling my metabolism. And I am hoping by blogging my progress that I can ALSO get in the habit of writing regularly. But I DID want to warn readers that the majority of my newly active blogging activity will be related to that. So that you don't feel you need to rush over here only to find I'm talking about that if it doesn't interest you, I will title all of them starting with FMD (Fast Metabolism Diet).

If you ARE interested though, my plan is THIS introductory post, then a REVIEW of each phase the first week (there are 3), then a weekly progress report and maybe a few extra things I learn or experience.

So why am I doing this?

I have ended up grossly overweight. I have always battled it and for decades was able to follow Weight Watchers to bring it back in check. I had four big rounds of success with Weight Watchers:

1990: lost 38 pounds and actually went 10 pounds BELOW goal at the time. (gained back to goal, but then held for a few years before starting to gain again)

2002: Lost 45 pounds and ended up 20 pounds below goal—mostly maintained 2 years until job change, then the gain started.

And as of my 40th birthday (2006) Weight Watchers has mostly stopped working. And since 2002 I've ended up about 100 pounds overweight... It's horrible! And I feel totally helpless. Nothing works. I've found a system to slow the gain, but that's as good as it's been.


This picture is mortifying. I am clearly seriously overweight and desperately want to do something about it. Even my face--my eyes have disappeared.

One of my writer friends posted a pic... she'd successfully lost 32 pounds on the Fast Metabolism Diet. I decided to investigate. And the premise is that through diet cycles over time we slow our metabolism more and more. Our body is panicked that we are facing starvation because we keep denying it stuff. The science behind this looks pretty solid to me with a goal of metabolism recovery.

Now it's not totally that simple. Different fruits and veggies and proteins are allowed at different phases. It is a rough one for full vegetarians, as phase 2 doesn't allow bean and similar proteins... for me it will be a lot of fish and turkey, as those are the only meats I eat.

The other big challenge: I am to divide my weight in half and drink THAT MANY ounces of water every day. At first this is going to be hugely challenging. I confess it is more than the 64 ounces of water most diets require. 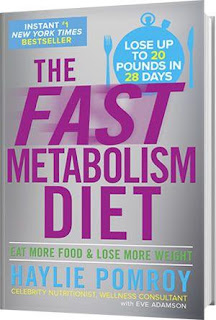 Phase 2 (Wednesday, Thursday) Start the fat grabber... the first two days tells the body it will give it what it needs, then this phase denies it fat and carbs, so it feels free to grab fat from the body stores.

Phase 3 (Friday, Saturday, Sunday) Pre-emptively stop the panic about no fat by adding in healthy fats. This apparently turns up the metabolism as it calms that panic down enough that the body thinks it is safe from starvation once and for all. It also does a lot of hormone repair.

I've read enough that I intend every day that allows fruit to include a citrus, every day to have at least one dark leafy green veggie. I'm trying to have it easy. I have a turkey chili recipe I can eat all but phase 2 that I plan to mega jump the veggies in... totally easy for one dinner and a couple lunches. I also have a fish stew that is just fish, vegetables, spices and broth for that difficult Phase 2.

And I had my first ever yoga class yesterday. At my work they are offering a Friday class and it is a lot cheaper than club yoga, as the U subsidizes it, plus they take it straight out of my check, so I won't miss it. So it started yesterday (went in even though it was a day off).

And I did my shopping for the week today. I had to go to three stores to find tortillas with no wheat or corn... but I found them. I think I will look for a recipe, though I hear Trader Joe's normally has brown rice tortillas (I ended up with some grain I've never heard of, but we will see).


Anybody ever tried this thing before? I'd love some advice. And I sincerely don't intend to bore you. That's why I am titling to warn you. Just skip it if you aren't interested. I'm trying to document for a few friends who HAVE expressed interest and get in a regular writing habit again. Hopefully it will take and I will get back to writing posts, too.

If anyone is MORE interested, the book was published long enough ago that I got the copy from my library, and TONS of info about it is available just by googling.
Posted by Hart Johnson at 4:33 PM 9 comments:

Is a Writer who isn't Writing a Writer?

Hallo fine peoples! It's first Wednesday and therefore the monthly meeting of the Insecure Writer's Support Group... Sadly, I'm not feeling very writerly these days. My mom attention is demanding a lot of me, which is ironic, since my kids are both adults now, but there you have it. I've also developed a real life group of friends so I do more social stuff, which can only be good, right? But the bad habits are the worst of it.

So the question for May is: Does this season inspire you to write more than others, or not?

Yeahnono. Spring makes me want to be outside. And if I take my computer outside I get a glare. But JUNE has been BuNoWriMo for me for many years, so THAT might get me going. Probably means I should spend May plotting, eh? And plotting I can do in a notebook, which I can take OUTSIDE!!!
Posted by Hart Johnson at 7:45 AM 18 comments: