Lessons from the End of the World

So I've been watching a lot of dystopian TV of late... And I think they offer some GREAT lessons for writing fiction. Let me first describe the most recent two, then I will get into what really works for me about them. 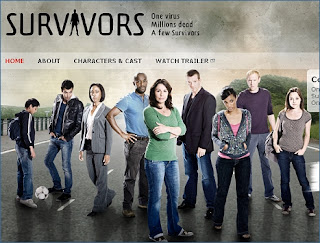 This is a BBC series that was two seasons (and MAN, I wish it had continued, as the cliff hanger at the end of season 2 was sublime, but alas... it is done).

Premise: A flu epidemic has killed all but about 10% of everybody. That remaining 10% appear to be immune to it—they don't get sick at all... with one exception—the main woman in the series is so sick that she MISSES everyone dying around her. Her husband nurses her and she is WAY out of it... when she wakes up, everyone around her is dead. The first episode is this person by person finding another, then pairs finding each other... Until they are the small cluster of people we will watch through the two seasons as they try to make due. 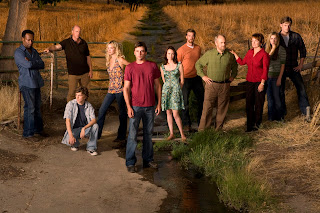 This is a nuclear war set-up—I believe it turns out 23 US cities have been bombed and the show follows the life in a small Kansas town and how they try to renegotiate life in a time that returns to bartering. The town has a small medical clinic, a single store, a bar, a church... and a lot of baggage, as small towns do.

Why are these stories so appealing to me? 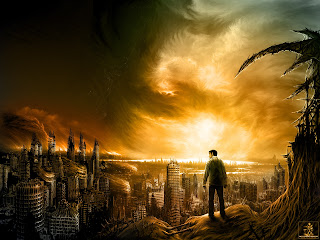 Probably the biggest factor is the desperation of the circumstances. Goods are instantly in short supply. Law and order are a thing of the past. In both stories, the criminal element organizes very quickly, looting and hoarding. People trying to do the right thing are just at such a serious disadvantage. The bad guys arm themselves and don't have qualms about killing over 'stuff'.

The situation brings out the best and the worst in people—some people become savage survivalists—every man for himself (or clan for himself, as the case may be). But there are also people who really rise to the occasion. I think the disparate directions personalities can take when subjected to desperate circumstances makes for such great fiction.

CONSPIRACY!!! Oh, I LOVE a good conspiracy, and both of these seem to have one under the core... in fact Survivors has more than one—a bit like when the Ministry and the Death Eaters were not yet the same thing—and organized force of evil and an organized force of “good” that is playing by the 'any means necessary' rule. Makes for a rich canvas of enemies.

New and Old: I am talking relationships here. Survivors is people who did not know each other previously, and I love the intentional fresh start, but where their past always comes back to bite them. I like the unlikely alliances formed. (in this case, my favorite is actually between a young Muslim boy—very devout, who is the only one to stand up from prayers as all the others have died in the midst of it, and a young oil prince of sorts—his mother is English and father a Kuwaiter oil guy—the young man in his 20s has clearly always been pampered—the two find each other first and have brought such opposite sides of their culture that they really hate each other initially, but end up very close.)

Jericho is the opposite case—small town folks are way too involved in each other's lives—so much so that some people try to flee—the main character in fact is one who has only come to collect an inheritance (unsuccessfully) and leave again, but the bombs hit as he leaves causing a series of car accidents and a need to find it in himself to do the right thing and save a bus full of kids. There are expectations everywhere for him to screw up and people around every corner he's had run-ins with...

I think the fiction take-home messages are these:

Make the stakes VERY high. Life or death is good.
Limit who can be trusted. A lot.
Make sure the bad guys could COMPLETELY devastate the MCs.
Keep the focus on relationships. Throw some really unexpected alliances in there.
Keep jerking the solution just out of reach.
So there you have it. My excuse for watching TV. Teehee.

Any of you have any shows currently feeding your fiction brain in large doses?
Posted by Hart Johnson at 3:00 AM

I remember way back when Reagan and Gorbachev ran the world and everyone was certain we were all going to die from a nuclear war - there were a few drama-docs on telly depicting what would happen if such a thing occurred! Basically, we are all doomed and everyone for themselves! LOL!

At the moment I am so into Danish drama! There's the amazing The Killing just finished and Borgen, just finished too. None are end of the world scenarios - but the shows are relationship driven contemporary with amazing female lead roles - amazing!

I confess I've not had a chance to catch any of those shows. The Walking Dead is a little bit like those in that it definitely brings out the best and worst in the characters.

I find it fascinating to watch how different characters clash when they're thrown together in situations waaaay outside their comfort zone!

oh man, now i totally want to read The Stand again, asap!
I have Survivors on my Netflix Instant Queue. We'll probably get to it when the tv season wraps up

I don't have a great TV list for you right now -- I got soooo into Game of Thrones and then halfway through they took it off our server -- to begin all over again. Now I gotta wait 5 more weeks to get my next fresh fix. But as for dystopian -- you gotta read Blindness. It is so fascinating to read as regular life suddenly shifts and changes when every person (except one) goes blind. B

You don't need an excuse to watch end of the world TV programmes! Sit back and enjoy. Ok. That came out wrong. Hehe.

Jenny-Ahhhhh, Danes... *cough* Oh... sorry about that... Just remembering Rasmus, an exchange student in high school. What a very beautiful boy. If we had any Danish programming, I'd probably be watching, too!

Alex-I've seen first season of Walking Dead. I think it is the Zombie angle that makes it just not quite work for me. I mean I like it, but I love this 'possible' stuff more.

Sarah-I could reread The Stand, too. It's a great book.

Barbara-I keep hoping Game of Thrones comes to Netflicks--I really want to see it! Will look for Blindness!

I've never heard of Survivors (guess I was too busy watching
Revenge this weekend). I'll have to check it out.

Your post reminded me of a movie that was made back in the 60's and based on a novel -- King Rat. It's about survival of the fittest among allied soldiers in a brutal Japanese POW camp. I casually knew a scummy guy who loved that movie and emulated the King character, which proves that survivors of dystopian worlds can often be the bad guys.

I think people relate to the fresh start aspect and then are hooked by all the tension that grows organically out of the desperate circumstances. So now why are both shows cancelled?

I do like this sort of thing too. I remember a book - I think it is called Jacob's Hammer or some biblical thing like that - end of world with CANNIBALS. Yay!
But right now everynight, mostly, is reserved for the 80's BBC Sherlock Holmes. We are mad for Jeremy Britt who died shortly after the show was finished. He is soooooo insane.
by the way - will you email me with the link to the Burrow - when my computer crashed I lost all that stuff, including your email. urgggh.

Have been wanting to see both of those shows! Glad they're so good. And YES! Wonderful things to take for our own writing! Thanks for pointing them out!

I watched Jericho and liked the beginning shows, but when it was canceled and they tried to tie it up so quick, I didn't like it.

I haven't seen either of these shows! They sound great. The closest I've got is living thorough Hurricanes Ivan & Katrina right there on the front lines. And I was writing for the paper at the time--so I got to see some of what you're talking about here for real. It's amazing, and it's ... sometimes it's so much, you can't talk about it. I remember just weeping on the front porch with a friend whose whole family was located in Gulf Port. Her husband was making daily runs, and she told me about a woman who appreciated my used tennis shoes so much. :o|

But what great story-starters! Good stuff. You're absolutely right about the best and the worst. :o)

I got addicted to Survivors a while back and can't find the second season. The agony!