Should we examine those fiesta lyrics?

The Cockroach, the cockroach.
Already he can't walk
because he doesn't have it
because it's missing
Marijuana to smoke.

The cockroach can't walk without it's marijuana!
Just like the Vampire without blood, I'd imagine...


So I'm not sure if we have people here who CAN walk because there is marijuana or people who CAN'T because there ISN'T... Or maybe we should just break out the tequila and call it a draw? But we are having a little party with some newses* and celebraciones! (* I made up this word *shifty*) 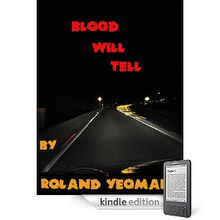 I'm going to start off with our friend Roland Yeomans... this is a news and invitation sort of thing, but also largely an excuse to start off with the above picture. Roland is giving away his book Blood Will Tell  for FREE! He is seeking reviews on Amazon and if he gets at least 10, he will give away an autographed picture of THAT hottie! (thank you Roland for the excuse to post naked Eric).

So to GET Roland's book, just go and click to buy. It's free. Then, when you get a chance to read it, post a review on Amazon—there are readers who will only purchase books with at least ten reviews. Though just downloading may get him a nice rating this weekend which helps... download even if you can't read right away... but the REVIEWS determine the PICTURE (not that one) giveaway).

"Life is never fair. And perhaps it is a good thing for us that it is not."
-Oscar Wilde

When we think evolution, we think of the life forms we can see. But what if evolution would occur on the microscopic level?
What if red blood cells achieved intelligence? Would they be happy at the world in which they find themselves? And if they didn't, what might they do?
In this story intelligent blood is starting an offensive against Man.
One lone telepath finds himself a helpless spectator as the race of Man is subjugated into mindless drones.
When the war is over, and he finds himself totally alone ...
How can he go on and why?


Again: Free five days starting yesterday, so get it this weekend!


Then, a couple tidbits alluded to by my buddy Vic at Hairnets and Hopes:

Justine Dell has gotten a book contract from Omnific Publishing in late 2012 for her debut novel Recaptured Dreams! Congratulations, Justine! (and thanks Vic, for the heads up!)

Sarah Fine's SANCTUM, the first book in the GUARDS OF THE SHADOWLANDS series, featuring a seventeen-year-old girl who has one chance to save her best friend's soul from hell where, in the process, she falls for the indentured Guard who is sent to make sure she doesn't succeed, to Courtney Miller at Amazon Publishing, in a pre-empt, in a three-book deal, for publication in Fall 2012, by Kathleen Ortiz at Nancy Coffey Literary & Media Representation.

(wow, eh? Thanks also to Vic for that.--who needs to pay attention when you have minions, eh?)


And Lynn Rush got to share her next book cover this week and it's GORGEOUS!  (like to say I found this on my own, but it is thanks to Ciara Knight.

And last but not least, progress for yet another blogger friend: February Grace has had five poems and two short prose pieces accepted for publication. Congratulations, Bru!!! (and congratulations ME for finding a newsworthy piece of info all by myself...)


I'm sure there was lots more great news, but as I've confessed, my attention span is short. I'd also like to leave you with this. My stress of late, caused by health and money trouble, unexpectedly collided and formed a brilliant glitter bomb of goodness... as in one problem solves the other. I know that makes no sense, but only because I can't tell you more out of respect for HWMNBMOTI's privacy. My world improved immensely in the long run yesterday (even if the next few months may remain rough).  Nakedness should soon return.
Posted by Hart Johnson at 3:00 AM

Aw, thanks! ;-) And congrats to everyone else you mentioned, too! HAPPY FRIDAY!

What a good idea! Celebrate early and often I say! Congrats to all those mentioned who made it to the finish line of their particular project.

Have a super weekend.

YAY!!! congrats everyone! and yay for hubby! even temporary stress relief is wonderful!!!
party ON!

Awww, thank you SO MUCH, Hart, for mentioning me! I'm so excited that The Rusty Nail accepted my work and I'll admit I am totally geeked about the idea of holding the print edition in my hands when it comes out!!!

Thank you so much and many SQUEEEEEEE!!!!s for Justine, Roland, Lynn and Sarah!Congratulations all!

I keep pinching myself, thinking I'm a published poet now... No. Way. LOL.

Wait- forgive me I'm half blind as you know I missed the line the first time about health and other problems.

Sending all good thoughts your way that things get better soon...

Everyday should not only be NAKED but Tequila time!! Yay!!!

Thank you so much for stopping in everyone! Fun to have a little party and celebrate great accomplishments!

We miss the nakedness. Wait, that came out wrong...
Cockroaches need weed? I'd think they would like Twinkies and tequila better.

Wonderful on your bit of wonderfulness. The writer blogosphere is on fire! Congrats to each and every one!!

First, my prayers are with you ... and my concern. We in the blogsphere get so caught up in trying to spark our dreams into life that we forget the daunting truth : everyone is having a harder time than they appear.

I will pray that your horizon holds both improved health and finances!

Thank you for the shout-out. I believe Luke Winters' tale of intelligent blood will entertain while shedding some light on what I do for a living (rare blood courier -- but so far the blood I transport haven't tried taking over the planet!!)

Lynn Rush's cover is truly beautiful. Congrats, February, for being accepted (Hey, isn't this YOUR month?)

Justine, I am so happy about that book contract! Sarah, all the best wishes for SNACTUM!

If you all could download BLOOD WILL TELL maybe my co-workers will stop ridiculing my dreams! :-) Roland

Definitely some good news this week for some fellow writers!!

And I'm glad to hear there is good news on your horizon too. :))

Something is in the air this February! It is a good month. Congrats to everyone. (=

Eric is rather delicious, isn't he?

Oh, I went and got the book and started reading... so far very interesting :-D
Thanks!

Hart, I so love your brilliantly obscure references...much love and glitter to you and hubs. Love the translation, did not know the needs of those nasty things. Thanks for enlightening me.

Oh and Roland...your coworkers will be saying they knew you 'when' soon! Cheersi

Kentutar :
Thank you so much for getting BLOOD WILL TELL. I hope it entertains you.

Sylvia :
I hope you are right! Thanks!

L. Diane :
If you do download it, I hope you enjoy it!! Roland

cockrach, nude photo and vampire? What have you got here?

I can't stand cockroaches...but I used to play this song on piano. hehe. Re: the song lyrics, those Spaniards are just weirdos it seems! ;)

Congrats to all those who have had amazing news this week!!