Taurus, as some of you may know... is a very PLAYFUL sign. As a Cancer, two signs away, it happens to be the most perfectly MATCHED playful sign, and somehow this stretch of May is VERY hard for me to do anything... productive... Why, you must wonder... memories, for one... the 8th of May... for another...

We Cancers are sort of an emotional, family oriented sort, by reputation, but the Taurus playfulness has a sort of childlike joy to it... it doesn't SEEM like the self-indulgent play of the fire signs, or the self-destructive play of Pisces... Taurus play is a drug we Cancers can get addicted to.

I have several fast friendships with Taureans, and they are a different sort than a lot of my friendships. That complimentary thing goes a long way in bond formation. (yes, I believe this, though I never look at birthday when forming friendships... it's an after-thing). It's funny though... the difference in the girls and boys...

I have some good friends who are April Tauruses... relatively normal friendships—mostly female, but some males... I like them a lot... a lot in common... easy camaraderie... 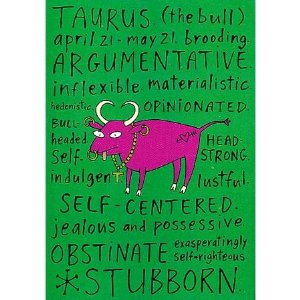 Then there is the Week of the Exes... I honestly didn't even know most of these guys were Tauruses until reconnecting on FB but May 4-9 only has one day without a 'past love'--by love, I mean only infatuation/attraction most of the time, but considering there are 2 of them on the 5th, and that this is probably HALF of my life's deep attractions (3 of the others are Virgos... like me some earth signs, I guess—only 3 aren't one or the other (there is a Cancer, a Leo and a Libra in the others, if anyone cares))--seriously... what are the odds... that 6 of 12 'loves' would have their birthday in the same week? If ANYONE can explain this, I'd love to hear it. Note ALL of these are only friends now—I married one of my Virgos... in fact the 3 Virgos are the only 3 I ever felt I might marry... weird, astrology, when you think of it...

I suppose my memory may be skewed because ALL these Taurus boys are in my 'current friends' set—easier to remember people you still talk to (then again that says something... that I still talk to them...) ... but I have a feeling this particular week is ALSO one with the ability to relax the sometimes insecure Cancer. They have a sense of fun, a sense of loyalty, and an enjoyment in a little self-indulgence that is fairly suited to that first week of Cancer. (I'd LOVE feedback from my friends born this week... ALL of us are writers, so I know there are a few of you out there) 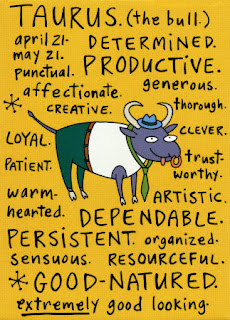 And then we get to the week starting 5/12... Of my 'intentional friendships'--those perhaps FORMED by proximity, but maintained because there is a deep connection... the 12th to the 19th is a pretty good run week on girlfriends for me. My current boss falls in here, for which I believe I am VERY fortunate.... one of my middle school friends... but my friend Stacy, who is the single person more nutty than me that I know, and my friend Natalie (I have a daughter named after her if that is any indication of how I feel)... this timing is the PERFECT match for total support... for fun when it is appropriate, for unjudging honesty... for BEING THERE...

Taurus is ruled by Venus, goddess of beauty and the arts. This brings a love of luxury and affinity for the physical expression of love... tangible, tactile... do I need to be more clear? Sex matters. (as does good food, drink and ambience).

Tauruses LIKE STUFF... it is an aesthetics thing... they want to be surrounded by beauty (Cancer's like stuff, too, but for us, it is security).

The SYMBOL of Taurus, represents the bull and horns, but also the CUP of material power brought about by force of will. (HA! Force of will! I know about that!)

Taurus rules the neck and throat and often has individuals with a lovely speaking or singing voice (my daughter the Taurus provides supporting evidence here... she has had perfect pitch since birth (and covered my mouth because I didn't when she was a toddler *rolls eyes*)

So to all you Tauruses out there... I love yibus! You are my kind of drug. You keep we hermit Cancers venturing into the world and having fun, in spite of our hermit habits. I promise to always reflect as accurately as possible, as I think you can use the emotional check of your most complimentary sign.
Posted by Hart Johnson at 3:00 AM

Love these pics, and have to agree, Taureans are extremely good looking ;-j
Wagging Tales - Blog for Writers

Nice look at the Taurus sign! I've got some close friends who are Taurean, too!

I remember one Taurean friend - a stunningly beautiful woman!!!! and oh she was very grounded and helped reign in my Cancerian emotiveness and melodrama big time!

She truly was blessed with the art of being NAKED! :-) Take care
x

My sister is a Taurean and she's pretty awesome!

Any thoughts on Aquarius? Or are we just wishy-washy?

I'm not a Taurus, but it suits you well, Hart!

Astrology is interesting. I know a psychic lady that lives in Tooele, Idaho and she's fun to speak with on occasions (when she isn't high on weed).

Wow, that's pretty neat! What are your thoughts on the recent switch of signs? Are you still what you were or has your sign changed? I prefer my old sign- Virgo- I am WAY more like that than what my new sign is supposed to be.

Very interesting! I'd look forward to knowing what you find out about the history with the week of ex-love interests...
My friendships with the female Cancers are very strong (proof in us!) but I married a Cancer - we had a very passionate relationship but never did get along as well as the female/female Taurus/Cancer.
Think of you often and miss you immensely! Love.

I've had mixed experience with Bulls; they can be fun & playful, but they have little time for the opinions of others. It rubs me the wrong way as an Aries; you don't have to agree with me, but at least give me a fair hearing.
PS LOVED your comment on my Z Sitchen post!

I think this post is so funny.. cause my bday is coming up I am a Taurus... and Marjorie told me she thinks your great...too... is she a taurus????

*giggles* Are you saying you're a Taurus, Charmaine?

Elizabeth-now Taurus and Aries are supposed to have some trouble... good that you get along with them!

Alex, are you saying I'm full of bull?

Michael *snort* Sounds like a trip. I like this stuff strictly for fun (and weed, not at all)

Abby-I have ignored the switch--it isn't that I don't believe it happened, because it DID. But I think the centuries of personality collection still hold, so they need to reinterpret before I can be bothered to relearn...

Will-yeah, one sign away is the hardest compatibility, so I hear you...

Lisa-YAY for another Taurus! (I think Marjorie's an Aquarius)

I ignored the switch too! (I was gonna ask too but then Abby did.) Very interesting stuff!

I have a friend from high school who is probably the best looking woman I have ever known in real life. She's got actress looks. She's also a Taurus. I've never met a Taurus I didn't like.

And I AM an Aquarius. My kids are all water and air. I've got two Aquariuses, two Cancers, and one Pisces. Weird how that works out.

Love the week of the ex's! Isn't it funny how you discover random things on facebook.

Also wanted to tell you how much I loved your mother's day post. It was so sweet and amazing-a true celebration of the day!

Garfield with horns! Did he give his soul to the Devil (like Dorian and I), or does he just want to become a bull? Bulls are cool animals. I grew up on the country side. We used to do "bull fighting" with the bulls in the fields when I was a kid, waiving with our T-shirts in front of them, then running like Hell to get over the fence before the annoyed bulls could catch us. Very exciting game. Recommended for kids age 10-14 yo >:)

Hey! My agent's b'day is 5/4! I wonder if that means anything in particular... I do have many, many Taurus friends. And then one who just went nuts on me and now we aren't so much. It's funny, though. We still have such great conversations... :D LOL!

Wow. My b-day is next week (big b-day *sigh*) and right now I'm looking at the impending reality of paring down everything I own into little enough to fit into a couple small shipping boxes (maybe)and two suitcases (definitely). So I guess if I ever did have the 'stuff' thing I'm about to get over it?

My weirdness persists even when it comes to fitting in with other Tauruses. Taurusi? Sheesh. I don't even know how to plural the thing.

I seem to have a Taurus attraction too. For a while all the important people surrounding me (Clark, Sam, boss at the time, etc) were Tauruses (Taurii as Sam calls them). And as a Pisces (firmly ignoring the switch) I'm 2 signs away from them on the other side so that's got to be why. ;]