YOU all are the BEST!

There! Had to be said!

Oh, MAN, I had fun reading all your entries... and I DID read all of them that were up at the time I got to the blog, but I get that some people post at night, so I will cruise a little today to see if I missed any... some 8-10 didn't have the blog posted, and I wasn't sure if it was forgotten or just would be a later posting.

There were some extremely creative entries, ranging from newspaper obits to fictional stories. I'd post awards in categories, but my memory STINKS and I don't want to disadvantage anyone for when I read their post, but I DO want to point to Michael, who plotted MY DEATH... I cackled and fell off my chair... it is SO FUNNY... there were several more that were funny, but oddly, that one spoke to me *snort* 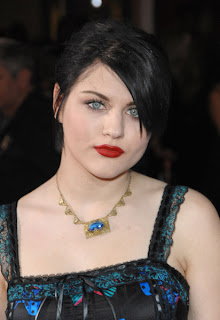 There WAS a detail though, that surprised me... only ONE of you noted that the President of the United States of America was none other than Frances Bean Cobain, daughter of the late Kurt Cobain and Courtney Love. It seemed like a beautiful piece of change to our future to me... (though possibly not nearly so shocking that in her 70s, she'd be flashing an audience)


My life is SWAMPED at the moment. I did finish my work deadline yesterday, but have two more looming near and a HUGE one looming far... it is that time of year. It means I've been remiss on blog reading... managing only maybe 10 a day, when normally I shoot for about 40-50. I apologize for that absence... I feel terrible. But I will really try to get back to it next week when the work load should allow me to pace myself.

In ADDITION, my homelife is in disarray... my daughter is taking Lifeguard Training this spring and it is a lot of hours... and they aren't right next door... so my normal writing schedule is messed with (and blogging schedule) (and catch up time). Hopefully this means she will be able to get a lifeguard job at a pool this summer—I've been trying to encourage this, as it's a full time summer job that is good money, so hopefully she won't feel she needs to work during the school year and can continue her sports and such. But it goes until mid-April, so I may be insane until then. 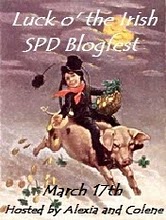 TOMORROW, is Colene and Alexia's Saint Patrick's Day Blogfest so I hope you will all come out to play for that! There is still time to enter! I'm sure there is Stout Beer involved... (at least here)

In other big news... Cruella has made a very difficult decision to leave Japan, and I think her blog yesterday is thoughtful, moving, and... pretty much amazing. I would sure love it if she decided on a career in journalism.

Thank you again to everyone who made yesterday such a success! My cheeks hurt from all the grinning I did all afternoon, which really does mean YOU ALL ROCK!!!

The doomsday blogfest was a success! Congratulations. And, life happens, things get hectic! Don't feel bad if you can't make it to everyone's blogs. We get it!

I hope things calm down soon!

I really enjoyed the Blogfest, and as I mentioned I did love that FB had been chosen President. But then I'm a big Nirvana/Hole fan so I guess it's natural ;)

So glad the blogfest was such a huge success!

Sorry about all the craziness in your life right now. Good luck with the deadline/work load and the driving to lifeguard training. :)

Anyway, LOVED your blogfest. Awesomness!
B

i am linking up late so sorry.

Ugh, yesterday was INSANE! My blogfest entry is up today and for some weird reason it went more bizarre than morbid. I'll go check out some of the posts today since I blew it yesterday. Forgive me?

Yay for your blogfest success although I don't think I came across your entry but will look for it again!! I did read the bloggers I follow who signed up and they were most enjoyable, so THANK YOU for spreading a NAKEDNESS globally!! Yay!!

I hope things calm down soon - please take care above all else!! x

Congrats Hart, it was a success!
So fun and intriguing~ I'm so glad I joined in; I laughed hard at the comments, too!

Glad you had a successful blogfest--I have read a few entries so far and enjoyed them. I just couldn't participate this time as I'm getting so behind with my A to Z correspondence.

ON top of that I decided to do my series this week on getting publicity--longest posts I've had in a while. Next I got to shorten my posts again and continue my April posts.

Hope you start rounding up everything going on in your life--if that can ever really happen for long. Always something isn't there?

I have to be honest...I wouldn't be in Japan right now or want any of my loved ones there. Nothing that has happened is their fault. It's just that they've been crapped on and no one wants to be near that, ya know?

I wish I had the time for all these cool blogfests! I did read a couple of entries though... Can I give you a raincheck for next time???

Ha!! Finally getting in here--work has been a madhouse...

Melissa-Thank you! I just wish my life would fall into line, yeh know?

Trish-HA! I knew you spotted it! In fact I had to edit, as I spotted that you'd seen it after I wrote my first draft.

Barbara-I do try! It's a lot, but I feel like I need to visit on par with the number of comments I get (ideally more)

Nf1-HA! I will head over there!

Angela--CAUGHT YOU! I think the lighter take is great!

hsoister-Yeah, it seems like the only way to grow a blog!

Lee-I can't imagine trying to organize that behemoth! I look forward to participating, though!

Michael-It's so true--natural disasters really are humbling and I feel so badly for the people without options.

The blogfest was a lot of fun! I've only been around to a few (fighting a migraine), but Michael's was great!

It was a great blogfest. They were all so creative. I got a big laugh at Michael post too.

I don't read blogs on Tuesday but I will be making my way through some of the entries. It sounds like you all had a great time! Yay!! I haven't been over to Cruella yet. That's good news considering. Hard decision but still good.

Hope things calm down for you!

Congrats on a great blogfest! I had lots of fun reading the entries.

I haven't got the time to visit all the participating blogs yet, but will make a tour this weekend >:)

Thanks for the shoutout. I'm glad you enjoyed my entry... I had a laugh writing it.

Good luck keeping up with everything.

Hart, your blogfest was all over the web yesterday!

Thanks so much everyone! I was just so thrilled with how entertaining they were! And more varied than I expected... not sure why... but I was very impressed...