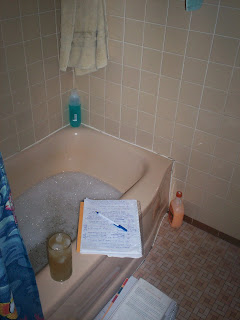 Late last week I could SWEAR I found a blog asking where people wrote and to post about it by Friday then to go THERE and put a link ON Friday... I thought it was Editorial Ass—it is the kind of thing she would do... but I don't see it. Am I making this up? Did anybody see it?

If in fact I am NOT making this up, I would just like to share... about 80% of my writing happens right here. Oh, I know... it looks pathetic and like the only bathroom in a house where people really could use two or three, but until I am rich and famous, this is just how it is... My writing desk (aka: the bathtub) (and yes, that is also a hard lemonade waiting for me... got to keep the gears lubricated...) 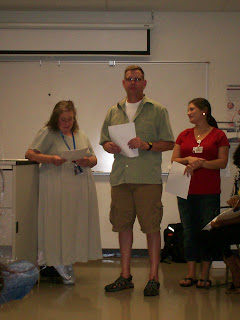 On Sunday my hubby finished his CNA course and got a little certificate. He still has to sit the state boards for it, but the class part is done. He enjoyed the class. It seemed like very nice people both teaching and in class with him. I also have a FABULOUS character idea (a scapegoat—the person BLAMED if you will) for the Armageddon novel I have planned. (Health care workers are easy to pick on, as they are on the front lines).

Anyway, Mr. Tart, former punk rocker (you can tell here, right?) was very hesitant... always... about ANY training. He hasn't had a great deal of confidence, but he loves this. He's a natural caretaker, and will make a great nurse when the time comes. He still has three more prerequisites, but hopefully this time next year he will have applied and we just need to wait for his name to come up.

I had an email chat with MY EDITOR yesterday (she is fabulous). She wrote suggesting a couple pen names, but I asked if it was okay if I used one related to my grandmas. I specifically requested Ally Calrson, but also showed her my options... She wanted me to either go with Alyse Carlson or Sylvia Olsen... I chose Alyse Carlson, as that was I was originally thinking. I'm not terribly concerned if people pronounce it wrong... If I am in a situation where people are using it for my name, I will probably request to be called Ally ANYWAY, and Alyse is more clearly my grandma, so I have my dedication in line...
Posted by Hart Johnson at 10:00 AM

I feel your pain on the bathroom situation--I love a good soak (especially with a tall drink), but with only the one I have to wait until it is pretty late to enjoy it. :(

I thought I opened the wrong blog for a minute, cause it was short(er) and everything shifted to the right :P Yay for Mr. Tart! I have the worst time with tying up the ending. So many possibilities and then I get all screwed up and overwhellmed and so and so forth.
I'm going to go ahead and duck and cover for this, but I can't take a bath. It weirds me out. I wish I could, but when I try I have to get out and flip on the shower. Strange......

Well done Mr Tart! I like the pen name 'Alyse Carlson'. My blog name is also a tribute to my Nan! Nans are very inspirational, so it seems.

I have also read a couple of blogs about where folk write - KarenGdid a post about it (I think) and more recently so didBarbara at From My Kitchen Table. Hope that helps!

LOL!! I love the writing in the bath - it's a watery tart thing to do!

And your hubby looks like a rabbit caught in the headlights here! Awwwww he's lovely and WELL DONE TO HIM! YAY!

And good luck with your pen name - it rolls of the tongue - sounds enigmatic! Alyse Carlson. Nice!!!

Rissa-I give my warning, but then just take my bath anyway--they know my routine!

Erica-too funny that you have a bath phobia! It's such a relaxing place! I could never turn off the statistician and tap the 'creative' me without it.

Jayne--Grandmas are the BEST! I got pretty darned lucky in that department, too. Fun that you also have a tribute to yours! And THANKS for the heads up on WHERE! I will have to see if either refers to that request I found!

OK--It IS a Watery Tart thing to do! It is one of the reasons, of all the Python things I could have chosen, that I picked THIS one.

And thanks to everyone for the congrats on Mr. Tart! I'd pass them on, but then I'd have to admit to him I blogged about him, and he gets really weird about that *snort*

Good pen name choice and congratulations to your husband.
And I have no idea where you say that post...

You're a rockstar! Congrats on the editor & pen name. That is totally supercool! I considered writing under a pen name, but I'm terrible with names. I'd probably forget my own pen name. :o|
And writing in the tub... Hmmm... While it accomplishes the nekkidness, don't drop your notebook! :p

Very cool about your grandma's namesake...it has a nice ring to it.

Leigh *snort* A TONE DEAF rock star. teehee. I also have a number of notebooks with wavy pages from a trip into the tub, but once they dry out, they still work! (I'm careful though)

Love that you write in the tub. I'd try it but I'm forever droppping things in there.

Great pen name - and do drop me a line if you ever want to chat about managing dual IDs!

Raquel- you snuck in there on me! You're the first person who hasn't acted like I'm nuts to write in the tub! I like it though.

And Talli--THANK YOU! I will definitely be in touch about the dual identity thing. Berkeley lets me do them together, but I will have a ton of questions once it all sinks in!

I saw something like what you might be talking about at Words of Wisdom where they put a link on Sunday, but it seems like I also sqw one for Fridays but can't remember where. Try the one for WOW.

I love your pen name and that is means something to you! Love your writing desk and your gear lubricate...lol! How exciting~ How many names do you have, now?! ;-D

Whew! So relieved to know I am NOT the only one who has a porcelain desk. Congrats to your mister.

I like your pen name and it's sweet that it's related to your grandmothers.

Dawn- are you a bathtub writer!? Excellent! We are a rare breed!

Medeia-thank you! I adored my grandmas!

Congrats to Mr. Tart...and to you! I think it's so cool that your name is a tribute to your grandmothers.

I suppose that writing in the bathtub helps you 'tap' into your creativity.... and 'plug' any gaps in the original structure.... and 'scrub' out mistakes before publication.... and 'clean' out ambiguities....

But what would I know? I come from a right shower.

Have a nice day.