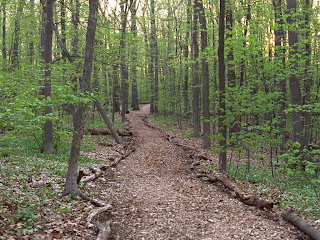 So on my powerwalk yesterday, the day was GORGEOUS. It has been... pretty much soup for the last couple weeks (too warm, high in humidity) but yesterday was FABULOUS. It was PERFECT weather, at least by midwest summer standards. Humidity had probably dropped to 50 and the temperature was in the low 80s... perfection...
I took my powerwalk—never miss it on the weekend... and because it was so nice, the Eberwhite Woods diversion did not even seem optional. I saw the entrance and dived in.
Ann Arbor is sort of lovely with all it's intra-city woods—greenspaces--there is actually a city goal of running a path in both directions (E/W and N/S) such that you could go all the way through town in a PARK—you'd have to cross streets, but a pretty nice jog, ne? Considering Ann Arbor is about 7 miles by 7 miles (7 square miles of real estate, surrounded by reality, as the bumper sticker goes) But I digress...
Anyway... so I dived in and remembered why I don't ALWAYS dive in... As I did the wide-step waddle with the stream running down the middle of the path, trying to avoid the particularly muddy spots... it occurred to me that sometimes the path gets MUCKY. 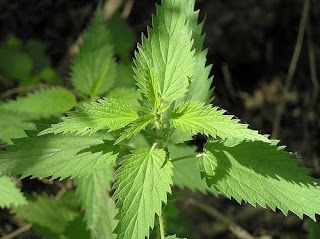 So I got to a certain point in the trail where the stream was wide enough that I had to hop and wobble to hit the dry spots... And then I had to go off into the growth to avoid the stream... and ended up in some sort of nettles.
OUCH!
It wasn't the REAL nettles... like the day long, spread to other parts of your body version you get in the woods, but it still sucked.
BUT THE WRITING METAPHOR!
Ha! You can't escape it! It reminded me of the fiasco where I THOUGHT I hadn't written something, so instead I WROTE something, but it was the WRONG thing, because I'd already WRITTEN something.... but that isn't the metaphor I was really trying for. PSYCH!
Here is the REAL metaphor:
Often when you write you spot something you REALLY want to avoid. And you work so hard to avoid it, that you don't spot the stinging prickles of the other options.
The LESSON... before you commit to diving off course, look a little more carefully into the other options... look either way, consider the REAL consequences of diving one way or the other.
So there... when you are writing, if you spot something that might get your feet all wet, CAREFULLY evaluate the other options, because the reality is wet feet are better than a painful rash.
Posted by Hart Johnson at 3:00 AM

Oh, I dealt with this recently with perspective. It's taken a lot of extra work I didn't anticipate to fix.

As a very young boy roughing it out in the woods overnight, Stephen King mistook poison ivy for just ordinary leaves and used them for natural toilet paper.

He learned the hard way to be mindful of his surroundings and to be sure that what he saw was actually what he saw!!

But as Robert Frost brought to mind, sometimes the road less travelled leads to a better destination. Every now and then it's fun to take that path in our writing, too. Roland

What? No bathtub reference.... just something about wet feet. Mrs Somboon will be disappointed.
Thanks for another fascinatingly presented post.

Sage advice from a lady in the know. Sounds like the walk was worth it though. I hate to be cooped up for too long. Hope you get back on track!

Dock leaves!! They normally grow next to or near enough close to nettles. They really work rubbed on the sting!

Ann Arbor sounds so surreal - it's an address I recognise from all the journals we receive here where I work so it's great to know what kind of place it is.

Thanks for the fab writing metaphor!
Take care
x

Lisa--I hear you--It's happened to me probably too many times to count. Doesn't matter if I'm writing or editing... I suppose it's the price for looking before I leap.

Roland--that Frost reference is actually good to keep in mind--diversions can be fabulous. I just need to THINK a little about them.

Boonsong-Roland got a bathroom reference for you up there! Erm... sort of...

Raquel-Mostly I am... Thank you!

OK-Ann Arbor really is a fairly nice little city. And yes, with the University, there are a fair number of journals published here--In fact the spot where the whip incident happened is right in front of the 'Mathematical Reviews' office. I will have to look up dock leaves. I hadn't heard that before and it might come in handy!

Nice metaphor! And...you're good to go walking in all this heat!

I got off track with my current WIP (which I won't name so I won't freak out any editors out there...) and then got back on track yesterday in a very unexpected way. And you're right--sometimes wet feet are okay.

Thanks for endeavouring to appease my disappointment, but Roland's reference (delightful as it is) just isn't enough....
And anyway, in this country we use a bum gun. Maybe I should mention that on my blog.

Have a nice day, Boonsong

I definitely agree with this metaphor. Although often we should be going into areas that sting us, as this can make for more honest writing.

Elizabeth, I'm glad you're back on track! And cool that it came about in an unexpected way.

Boonsong-you should definitely blog about the bum gun... I don't even know what that IS, but the imagination soars.

Mark-I think it's probably good to take a COUPLE of these nettle-paths... keeps it interesting, but I DO think they should at least be explored before stepping, as some of the stuff out there might break your ankle!

Hahaha, I love how you relate everything, and I do mean everything, to writing, Hart. Awesome.

I'm jealous of your cool-enough-to-walk-in weather. Michigan... so nice this time of year... of course, we don't have the four thousand feet of snow to deal with in the winter, but it still doesn't stop me from being all envious.

Have a fantastic Monday!

I've ended up in nettles too, and worse than that a dead-end skinny trail on the sheer-drop side of a mesa. That's when I retrace my steps and start all over again. Same thing with writing.

Excellent metaphor -- so true. I was just reminding myself (for writing, but maybe it works for life too) to always remember the core theme when I;m diverting. Usually that's the best "tell" in terms of right direction or wrong. Just a thought...
B

B. It's what happens when you are desperate to think of something to blog about--the whole world becomes a metaphor...

hsoister--Oi! I've done that too--ended up somewhere there was NO WAY to get out of... just turn around... (both in writing, and in my endless meandering)

Barbara--EXACTLY! I've meandered in those woods for the sake of it and gotten so lost I had to employ the 'keep going straight until I got out-- no matter what' Definitely best to at least know where the path IS.

I had to laugh when I read this because I’ve had so many experiences of fixing one problem and causing a dozen more. Sometimes it is simply better to leave things alone and skip diversions.

I grew up in Michigan and remember walking through a patch of nettles on a number of occassions. Thanks for bringing back bad memories LOL!

Jane-I often do that when I am typing up what I've written--I need to have better discipline to not change the plot when I type, as it ALWAYS pushes me into the nettles.

Stephen- *snicker* Sorry to sting you!

Great metaphor. I went off track recently with something. It had to do with the ending of a wip and I ended it the way I felt comfortable with, making it in fact awkward, rather than staying true with the main character. So I should have explored my options better.