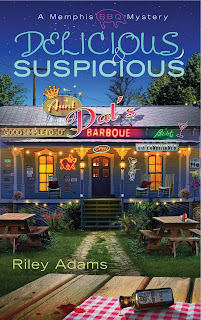 A Book Review: Looks familiar, doesn't it? Elizabeth was here yesterday in all her FABULOUSNESS, and TODAY, I am going to talk about her book! (this, my friends, is called a marketing one-two-kapow! *snort* okay, so I made that up... but that is what we're doing)

The Tart Gets Cozy

When I first started blogging, I was looking for an agent for my main stream/suspense book. I was making friends with all sorts of writers, and I was learning just how much I DIDN'T know about the genres out there.

It possibly is truly beautiful that I first heard the term 'Cozy Mystery' from Elizabeth. Oh, once they were described I knew I'd read a couple (typically enjoyed them), but I hadn't known 'mystery' distinguished this way.

And not knowing, was PART of why I didn't really have a feel for whether I liked mystery or not—sometimes I LOVE it—sometimes I find it dry and boring... I guess it boils down to how much HUMANITY is in there. Unlike CSI, which on television, I can watch with fascination, I don't really WANT a ton of forensic technicalities in my reading. I think it's because on TV I can SEE what they mean, so I can 'get it' but when something is described without a visual, it is WORK WORK WORK, and if I am going to WORK that hard at reading, I prefer a literary book. Give me a dead Russian.

COZIES though, have clues that can be spotted without a PhD, and a puzzle comparable in difficulty to a Sudoku (which sometimes I can do and sometimes I can't, so I keep trying), and CHARACTERS that are colorful, often funny, and have a hysterical mix of quirks and baggage. It is mystery meets soap opera, and I LOVE it. 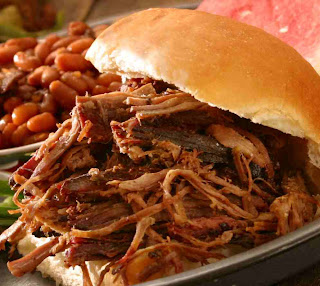 I had a chance to read this little gem early. Elizabeth was truly FABULOUS with some guidance when I was doing my Cozy Audition, and one of the things she let me do was READ her pre-published Cozy...

I fell in love right away with Lulu, owner of 'Aunt Pat's' a restaurant touting the best barbeque in Memphis. Aunt Pat's has been in the family for a long time—Lulu literally grew up in the kitchen helping her Aunt Pat, and now one son works the pits, her daughter in-law waitresses, and her other son has recently returned to town and is helping out with book keeping. Even her twin granddaughters help out—a real family affair.

The book opens as the group is preparing for a talent scout from the Food Channel, who is going to do a FEATURE on the best barbeque in Memphis, and they badly want to be chosen (believe they DESERVE to be chosen)

See... the trouble is that talent scout is a B word that one would never USE in a Cozy Mystery... Shrew might work... her specialty is belittling just about everybody and she treats a WHOLE MESS O' people REALLY ROTTEN... erm... then she dies. 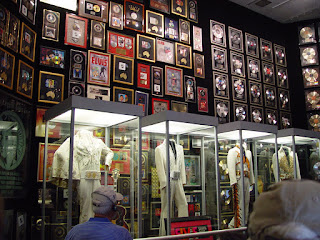 It is the way with Cozies... the rotten people are not long for this world... and then the real fun begins of figuring out whodunnit.

Aunt Pat's in addition to the family running the place has a variety of colorful customers—the old men musicians, the romance writing spinster, the art gallery owner next door, and... (these are my favorite) the GRACES.--One of the Graces is even a Tart!

But you really should just read the book to find out.

Now I KNOW some of you have gotten it and read it, but there are OTHERS of you still waiting for it, so I would LOVE to have a book discussion, but PLEASE no spoilers!
Posted by Hart Johnson at 3:00 AM

Lynda LaPlant? Writer of Prime Suspect?
Thanks for introducing me to concept of Cozy Mysteries!:-)Delicious and Suspicious sounds like my kind of read! Another to add to my ever growing "will buy, borrow, beg from, steal books to read by the end of 2010!" list! LOL!

Okay, it's 7:30 in the morning and I can't focus on anything in your post but that picture of the sandwhich. Man, that thing looks yummy!!!

I love CSI, but like you I don't like reading that stuff. Too dry and hurts my head!

Hart, thanks so much for your sweet review and for giving me marquee placement on your blog for two days in a row!

I've always liked the *idea* of CSI, but unfortunately, I have a very queasy stomach when it comes to forensics--and a lively imagination so that I feel like I'm right THERE! That's probably my favorite part about cozies--all the murdering happens offstage and we don't have to worry with autopsies!

And Old Kitty--Thanks so much for putting me on your TBR list!

I'm definitely picking up a copy of Delicious and Suspicious. Love that title. LOL

OK and Dawn--you will be glad you put it on your list!

Elizabeth--happy to! It looks like you are featured a couple places today! (and yesterday I had almost 400 hits--that is 3rd highest for me--so featuring you is smart on MY part, too!)

Titles that rhyme are brilliant. I am taking to whodunits in a big way so this is on my insanely large to-read list. I will read it while listening to "Drastic Fantastic" and wearing my "Tragic Magic" T-shirt!

Dawn and M.J.--Thanks so much for putting me on your lists! I really appreciate that. And I love the image of "Delicious and Suspicious" being read in a Tragic Magic tee shirt with Drastic Fantastic playing!

Sounds like a great read. As for discovering another genre, or subgenre...I hear ya. I used to write action thrillers, always complaining that there weren't any good romantic suspense books. My husband finally told me one night to quit whinig and start writing one. Best advice ever...love the genre from the author viewpoint. So fun to write and research.

*snort* Mark, you crack me up.

Elizabeth-I think you need Delicious and Suspicious T-shirts! (you can actually MAKE them at Kinkos--my husband has a T-shirt made from a picture of my kids)

Raquel--perfect! it is funny to discover there are people already reading and writing what we think we're inventing!

I bought the book but haven't had a chance to read it yet. I think tomorrow, after my nephews birthday party, I will cuddle up with my Kindle and this very interesting cozy!

Raquel--I think sometimes that's the best inspiration of all...realizing that you can create something that's not available on the shelves.

Thank you for definining cozy mystery! I always wondered what exactly that was. I've never been a fan of those PI books with the cold MC, so this sounds very appealing!