So yesterday was Bad Poetry Day. I bet you didn't even know there WAS a bad poetry day. I know I hadn't. But my friend Sketchie (the SPAZ, you may recall) pointed it out, so I proceeded to write the following:

I hope that I shall never sit
beside an ocean full of... rotten food.
The smell that wafts upon the air
Is worse than wearing underwear.

Of course that isn't the first time I've written bad poetry. I am relatively adept at the limerick. Here is an early work from my Harry Potter days:

St. Patrick's Day Limerick (blame Tara, she got me started) 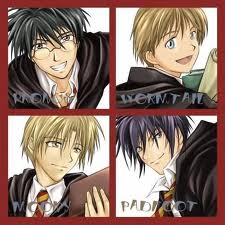 
Full circle, we're now back at James
Or Prongs in Marauding names
He stood up for his friends
To the darkest of ends
but his legacy's certainly no shame


So anyway, I invited my friends to write bad poetry and had this entry by our own buddy B. Miller: 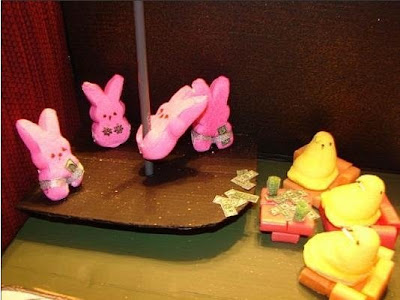 O, Fickle Peep!
Why doest thou flitter hither and thither so?
Art thou mad?
...No!
Thou art simply puffy.


Thine grit is so sweet!
Make love to my tummy, O Peep!


O yes, your eyes shall be plucked,
your body burned.


And Lance, (Sketchie's brother... a fact I find suspicious) wrote a series of 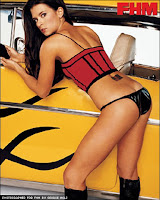 
Joris did some translating:

(the above is a translation of the poem "De mus", by Jan Hanlo)

and wrote an original:

And then Kerry contributed this:

work was going slow last night
call for thunderstorms don't give us much fright
suddenly there was a call that was rather dire
as it turns out; the canopy was on fire!

And LeaAnne (not to be confused with Leanne) added:

And then here is my final entry, followed by an EXPLAINER!


Taking my power
swearing me to subserviance
I jump for joy
It's my contract!


You heard me... contract arrived last night. I read it and sent a set of questions to my agent, though was rather impressed that I understood at least 90% of the words and 20% of their meaning. I will get it mailed later today, after making my copies. Very exciting!

I am genetically incapable of understanding poetry. It just looks like hieroglyphics to my eyes.

You have a brand new contract
By jingo I am thwacked!
Excited and thrilled for you!
I shall celebrate with a glass of wine or two!

Ted- i have trouble with anything that tries to be too clever, but limericks are right up my alley. They are a bawdy naked sort of poetry.

Jenny, that was FABULOUS! Thank you!

These are funny! I like when I get poetry. I'm usually poetry dumb.

Congratulations on the contract!

Love the poems! Potty training and beer--my kind of poetry!

Congrats on the contract--and for understanding so much of it!

Lisa-that is me too... straight over my head most of the time. Thanks!

Elizabeth-I know, RIGHT?! Topics we can relate to! *giggling about the understanding* That is overstating it a little...

OOH! Yay You! I'd imagine you called them and asked, "I'm not seeing the 'Birthday Suit' clause. Is that it on page 23? We'll get it in negotiations." Can't wait for your book signing: "Pants. Shoes. Shirt. No service."

OMG, these are hilarious. I esp. liked the ode to the Peep--thou art simply puffy... ! :D

And your HP limericks are divine as well as the "real men" haiku.

I submit for your bad-poetry pleasure my drabble on Pierogi. My hubby said he was scared after he read it. Ha! http://eastforgreeneyes.blogspot.com/2010/07/odes-to-those-which-sustain-us.html

Hey Hart - Congrats on the congrat!!! YaHOO!!! Loved the poetry. I had no idea yesterday was bad poetry day. I'm so bummed too. I had an incredibly bad poem about beasts with stinky feet that like to eat beets. It would have been marvelously BAD.;-)

What a fun post and I love the Peep picture.

Congrats on your contract. Best of luck!

Good, bad poetry. The peep show is disturbing in an amusing way. But the last paragraph is great news and you understood a whole 20% of it. LOL

Bad poetry day?? I have TONS of those.
Congrats on getting the contract and Happy Birthday Hart's gandpa!

Will *snort* I plum forgot the nudity clause! I'm reaching for my red pen now!

Leigh-teehee--don't I have talented friends?

Rosie; drabble on Pierogi? *snarfle* I will go check it out!

Rachelle-Your poem sounds like a Tom Robbins novel! You can always still play!

B. Isn't that Peep picture funny? My friend Jel E.Bean found that... it's an Easter staple of mind (and yes, I have a friend named Jel E.Bean)

You're awfully good at writing awful poetry, as are your lovely friends.

I love the peep picture of the peeps peeping at the dancing pole peep.

BUWAHAHAHAHAHAHAHA! THANK you for that booming endorsement, Helen. And yeah... aren't those naughty peeps perfect?

Wonderfully bad poetry. I loved it all especially the peep show ;) Congrats on your contract!

Great C word..contract! Happy to hear this news for you! Bad poetry, yes I could probably do this...instead of the good stuff, lol!

Any poem with the word mildew...

I didn't know there was such a day, and I'm sorry I missed it!

AAAUUUGGGHHH!!! How could I be late to bad poetry day!?!?!?!? I excel at bad poetry! Let me think. I shall post a late entry.

She says she's a watery tart.
I'm confused: is she Alyse or Hart?
It don't matter to me,
cuz her blog posts, you see,
I just totally pink fuzzy heart.