Today's guest has something ALL of us need... a truly committed spouse (and I don't mean the kind of committed I sometimes think MY spouse needs *cough*. Seriously though, Douglas's lovely wife Jill was the contact seeking places to guest blog. I think we ALL need somebody that fabulous helping us out. So if any of you want to be my devoted spouse, I am willing to consider bigamy.

That said, Douglas's book is an award winner (very promising).  It came out in April, so you can go get it in your hot little hands!  He is talking to us today about development of a series character—something I think a lot of us can use. So WELCOME Douglas Corleone! 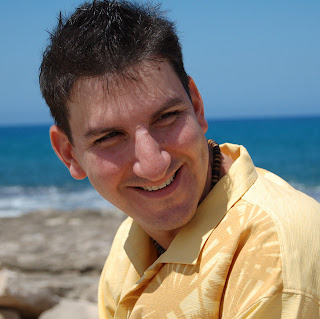 Author Bio: Douglas Corleone's debut novel ONE MAN'S PARADISE is the winner of the 2009 Minotaur Books/Mystery Writers of America First Crime Novel Award. A former New York City criminal defense attorney, Corleone now resides in the Hawaiian Islands where he is at work on his next Kevin Corvelli novel. Visit the author online at douglascorleone.com. 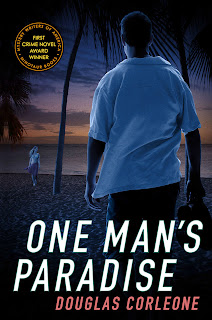 Till Death Do Us Part: Thoughts on Creating a Series Character

In the process of writing a novel? Careful when creating that main character. He or she just might be with you for life.

When I set out to write my debut novel One Man’s Paradise, I concentrated heavily on developing the protagonist, hotshot Honolulu criminal defense lawyer Kevin Corvelli. As a fan of hard-boiled mysteries, my aim was to create a lead character with the potential to be as tough yet touching as Dennis Lehane’s Patrick Kenzie and Raymond Chandler’s Philip Marlowe. I was also intent on giving my lawyer the smarts and savvy of Steve Martini’s Paul Madriani and the wit and cunning of William Lashner’s Victor Carl and David Rosenfelt’s Andy Carpenter.

In a way, Kevin Corvelli is a Frankenstein of my favorite lead characters, a hodgepodge of literary powerhouses spiced with a unique voice and enough flaws to make Charlie Sheen cringe. And I confess to having a man-crush on him. Which is a good thing, because (thanks to my agent and editor) it looks as though Kevin Corvelli is going to be with me for some time.

Of course, many first-time novelists don’t set out to create a series. But the reality is, if you are fortunate enough to get that first book published, fortunate enough to have it read and adored, your publisher - and more importantly, your readers - may very well want to see more.

So when crafting your first novel, be sure your protagonist is not just someone who your readers will want to spend time with, but someone you might consider spending your life with. Which character traits do you find most endearing when you’re reading a novel? Do you enjoy edgy humor? If so, make certain your main character doesn’t take himself (or herself) too seriously. Imagine a straight-laced New York City homicide detective who not once cracks a smile in Books 1 and 2, but suddenly becomes a regular Jerry Seinfeld in Book 3. Taking a risk like that could lose you some readers, and by extension, your next book contract.

My personal pet-peeve in crime fiction is a hero who unfailingly does the right thing, a by-the-book bozo who is too self-righteous to take a drink (with the exception of reforming alcoholics, of course), to throw a punch when a punch is called for, or to hop into someone else’s bed when the timing’s right. Had I created Kevin Corvelli in that vein simply to please a particular agent or editor, I’d be pulling my hair out right now. Because Book 2 would have been an impossibility for me.

Instead I get to spend at least the next couple years of my life with my pal Kevin Corvelli - who I would trust with my life, if not my wife. And that’s a relief. Because as much as we writers want to get that first novel published, let’s face it - what we want is not a single book but a career. And quite often, a series is the best way to achieve that objective.

I don't think Jerry Seinfeld would make a good detective. Kramer though would be kick-ass.

I think Kevin sounds like a great protag--so long as he isn't as misogenistic as Marlowe-- but I agree with you--flawed is more interesting than straight-laced and there is a lot more longevity to the character if they have some lessons to learn.

I didn't intend to write a series either, but now I'm working on a second book. Thanks for the pointers.

See, with a name like Corleone, I'm not surprised Douglas won an award. I imagine the judges were all, "ZOMG, he might be related to Don! Quick, give him the award, before my pet gerbil's head ends up in my sheets! GAH!"

Oh yeah, and I agree about the MC you don't mind spending time with. (But wouldn't let your wife spend time with.) Yup.

Simon-I know, right?! On facebook, when I was promoting this, I threatened to break people's kneecaps if they didn't come read *shifty*

I recently hooked up with Douglas on Facebook and his book One Man's Paradise is on my TBR list. Should get to it in a couple weeks or so. Its fun to see people like Douglas at variosu sites in the world of Blogdom.

And I agree that having a series (in my case a trilogy) is the best way to achieve a career in writing. Douglas, best wishes for your success.

Your warts-and-all man-crush character sounds strong enough to carry several novels on his manly back. And thank you for pointing out that it's HELL to live with perfect characters who never commit a sin. I'm looking forward to reading your hard-boiled Corvelli's tale.

Good luck with the book release.

I'm working on a trilogy too. So far I've written four chapters of book 1 ... nice to have some long-term goals >:)

Wait, I'm confused - I checked this book at work today and it came out way back in April, so is it being released on Friday in some other country/market/format? *scratches head*

HA! Leanne! My bad! I saw the date and the A threw me! ACK! I've been misleading people all day!!!! Thanks for the catch!

Good advice to create a character that you could live with and write about for years to come. To do that, it's got to be a multi-faceted character. Hope the series is long-lasting.

Is that a great name or what? "Buy my book or my family will come after you!"

When I write my Cheeseman adventure series, I will take these pointers into account.

Hart, thanks for having me! And thanks to your readers for all the great comments! (You all get to keep your kneecaps...assuming you read the book, of course).