First, a disclaimer: I am training somebody this week at work, was on vacation last week, and have a half dozen largish deadlines. I will still blog hop, but will maybe only hit the blogs I try to regularly hit about half as often this week. I apologize, but so rolls the ball. I just can't really do any of it from work, and normally I hit about half of what I hit while there. 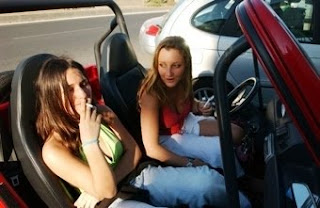 So I got blindsided this week by a STORY IDEA (two actually, but one is a short, and manageable) and it (the long one now) won't leave me alone. I have no time for it. I have a Cozy to edit, then at least one of my others to finally get into shape, so I have slated it for my NaMoWriMo... but it WON'T STOP PESTERING ME! Pick Pick Pick Pick Pick....

Definitely a YA... and did I mention it is a murder mystery? Do they DO YA murder mysteries? It is NOT cozy... I'm liking the ideas though.

What is it about some ideas that they take hold like that, and will NOT be ignored. I've had one that made me drop a different book for it (that other book still sits, half finished). And I have some that just patiently wait until I am ready for them. Is it the characters involved? Is it the plot? Any of you have a clue? 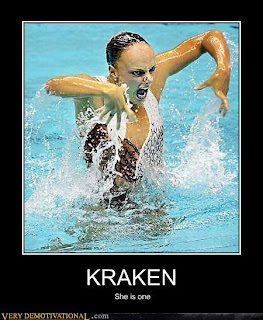 So I am reading a book right now, which I am not yet naming, as I have just got onto a character who I like better than the first, but the first 40 pages were from a guy who is just hard to like. It isn't that he dislikable exactly, but I haven't found anything to grasp onto that I really sympathize yet... he's a cold fish—hard to know--who gets himself in a bind and sort of wanders willingly into trouble. Now I THINK it is because the author needs us to doubt him the whole book (is he the murderer?) and I REALLY like character number two already (in only about 5 pages) so the BOOK is promising. And I LIKE some ambiguity, but at the moment I am wondering how risky it might have been to start with the unlikeable guy. I mean the book seems to be doing okay, but is anyone getting lost?

But it brings up several questions.

How important is liking? Sympathy? Identifying? Does intrigue make up for it?

And when does likeable have to happen? Is there a point of no return? Do they have to be likeable by a certain point for the book to be redeemable? Can a convincing show of delusion make up for it? (Lolita comes to mind—a beautiful book with an ultimately unlikeable MC).

I guess I can think of examples of very dislikable characters that had a certain CHARM or WHIMSY. Death in The Book Thief wasn't LIKABLE exactly, but he was still sympathetic.

Am I insane? Are there people who like dark, unredeemed MCs? Anybody out there okay with Crime & Punishment (and WHY?--though I guess he sort of learns his lesson, but not enough for me.) 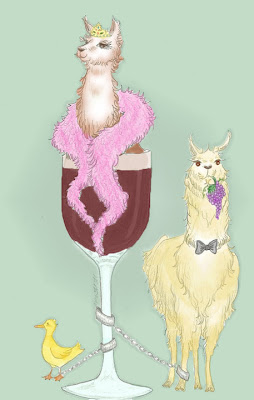 And NOW, to counterbalance all the negative energy... Evidence that I have FABULOUS friends!

My friend Rissa made this for me... Do you recognize me? The Tarty Llama in the wine glass (con tiara) with my man-minion llama and duck companions?

It is of note that there are NO PANTS in this picture.

Oh, I adore Crime & Punishment. Unbettered for psychological insight into the mind of a criminal.

Rashkolnikov is sympathetic because of his situation: we can relate to the old crone chasing him up for rent, and the crime is one we all might contemplate ourselves, without ever getting past the first murderous impulse.

With MCs, their external presence needn't be sympathetic, as their surroundings or circumstances often give us greater insight into their actions. It's characters who are always rude or abrasive that irritate me: it's obvious they will get their comeuppance by the end. Poor Miss Havisham!

I've enjoyed some books where I didn't exactly like the MC. There needs to be something I can relate to or sympathize with for me to enjoy such a book.

I'm happy to not like a character, as long as I am intrigued by them and care what happens to them. If I dislike them so much I want them to disappear, I'm not going to get into the book. If I dislike them and am amused by them or fascinated by their horrid nature, I usually take the ride with them to find out where they'll go.
Great topic and great question.

Oh I love you as Queen Llama in a wine glass!! Lovely and regal and oh so you!!

Crime and Punishment! Gosh. I read this years ago... there is a kind of redemption with Sonya at the end I think but I remember this as a fascinating read - heavy going!

Mark-you pulled legs off spiders as a kid, didn't you? (kidding) Maybe it is more a male psyche. I don't get him AT ALL... couldn't even GRASP contemplating it, let alone doing it--and it came across to me as CURIOSITY--could he do it? I mean sure, rent sucks, but he wasn't forced into it.

Ted- that is sort of where I am coming from. Unlikeable can be lived with if I GET it.

Jade--yes--or intrigue--I think that is where Humbert Humbert, more repulsive of people types, passes. He is fascinating, and has NO CLUE (until the end) how horrible he is.

Jenny-you snuck in there! Thank you on my llama queen! teehee--you can tell Rissa has known me for ages (and is quite talented). And I will agree with the Sonya redemption piece, but I guess I didn't like THAT either, because then she ends up giving up a lot of her life for him, and THAT bothered me too.

If (s)he's utterly unlikable, at least give us a minor come-uppance: a parking ticket, coffee spilled down their front, an irritating-but-not-fatal STD, throw us a bone!

I have no problem with unlikeable main characters, BUT they have to have at least one redeemable quality or something relateable in their character.

Scott asked me what the hell I was sketching and when I showed him he looked at me like I had lost it. Sadly, the explanation didn't help matters any. I'm glad you love it :)

Rissa--Oh you poor girl with your Big Giant Thing clone... Mr. Tart wouldn't get it either, but I think he may eventually accept my madnes... when it starts to pay.

I was worried Heather in Book V would be too unlikeable - she was a you-know-what in the first couple books - so I really tried to show why she was like that and gain sympathy for the character.

That Kracken girl is scary.

Test readers suggested I tone down the attitude of my main character and make him less of a whiny jerk. Hopefully I succeeded!

That picture is awesome!

I don't need to like a character but I do need to be interested in them somehow and at least see some reason to root for them!

LDW-showing WHY someone is a jerk is a super helpful tactic. I still prefer some redemption, but the 'why' goes a long way.

Alex--I think that is a GREAT function of first readers... I think it is easy to go overboard with big personalities or underboard with more subtle one... I think the one I've got is an underboard... I need something to grasp.

Talli-Thanks! And have you been introduced to the Australian meaning of the word root? *snort* (I'm terrible)

There are plenty of unlikeable protagonists out there--Highsmith's Ripley is one of them--and I can read them as long as they're interesting. I'm uncomfortable being asked by the author to share their POV, though...I'd rather see their world through a 3rd person POV than first.

There are some not likable main characters, but usually there's something for the reader to latch onto, and say, ok, I know why he's like this or I can understand why she's always short with people or whatever. I don't get cable but have seen Dexter a few times. I mean, the guy kills people. Yet I like him.

I know exactly what you mean about being hit with story ideas. They're so distracting because I want to work on them RIGHT NOW and because I want to know how they turn out. Concentrating on a present manuscript I'm supposed to be editing just ain't as glamorous.

I'd rather find the character interesting than likable.

In my new wip my MC is unlikable at first, but I threw in backstory on how she came to be that way to form sympathy. But I've read books with a lack of sympathy that work out well.

If a main character is unredeemable and not going to be redeemed, I think some combination of sympathy, indentity, or likeability along with definite intrigue is necessary for us to leave the story with some kind of strong feeling. If the character is a horrendous mass murderer there should be something that points to a cause for what they do--I don't think anyone is absolutely evil from birth and if they were then we should feel something for their families or people who tried to help them. Absolute evil-- hmmm I'm going to have to see how that could work.

Do the characters have to be 100% unlikable? Or can they be unlikable with just a couple redeeming characteristics?

The llama with a tiara is priceless.

And bad guy main characters? I don't usually care for them, although I don't mind if the good guys sometimes do bad things (for a good cause, of course).