And by people, I mean... well me. Though technically I am usually only one person. I am only PEOPLE on Thursdays. But yesterday, I got a FABULOUS Award from Simon Larter (who is quite strange, as HE clearly earned the award himself). Simon is obviously quite mad... the good kind of mad. He is sometimes hysterically funny, sometimes the epitome of snark. So what IS this strangeness award? 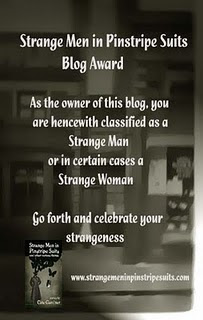 Text plagiarized from Simon: See, this is part of a contest being run by Cate Gardner, whose book of short stories, Strange Men in Pinstripe Suits[http://www.strangemeninpinstripesuits.com/], is forthcoming from Strange Publications[http://strangepublications.blogspot.com/]. To enter, all one does is pass along the award to other strange types and let Cate know about it to be entered for one of two prize packages (rules here).


And so I went delving through my favorite blogs to determine which could be determined truly STRANGE... and so with much prancing about naked, I pass on the Strange Blog Award to:


Blog O' Cheese: Abe is a first grade teacher, which would make pretty much ANYBODY strange, but as evidenced by such blogs as the Pooping Bandit, he truly has embraced the ideology.

Boonsong Somboon's Thailand Photos: Boonsong has a delightful tone to his description that lets you know he means something completely different... talking about how lucky his wife is by describing the things she has to put up with. I am learning a TON about Thailand, but the STRANGE is something you may have to aesthetically absorb... maybe it is the house gecko, or the yard cows... I just love his perspective. It's STRANGE!


Falen Formulates Fiction: Sarah is pretty amusing and clearly a little zany, but the strangeness comes in when Yvie takes over. Yvie is a NUT! (and a dog) and I love her excitement and Friday words. Also love the critter strangeness. 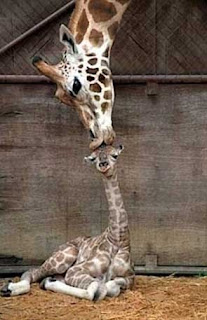 The Giraffability Of Digressions: Mari has truly beautiful observation skills that can make even the most mundane observations into hysterical stories. I particularly love her word-smithery—very creative. To her credits are Hing, Ne, Giraffability, and the religion of Digressionism.


Procrastion Princess: Tara is wacky and bizarre. She would have us believe it is because she is Welsh, and having Welsh blood myself, I am willing to buy that, but the idea that a whole (near) country (former country?)... how do you classify Wales, when it is part of Britain? Anyway, all you need to do is check out Tara's Taff stuff to know how strange SHE is.

Quiddity Of Delusion: Mark writes speculative fiction, which probably is an adequate synonym for strangeness without further explanation. I love Mark's humor, and I particularly love his strange take on nearly everything.

Random Thoughts From a Beer Wench:  ET is strange in a little different way than most of these... it's like taking a hit of speed and diving into beer... literally... her energy jumps off the page at you (she actually has TWO blogs, and the erotica one is also fabulous, but a little more serious on the writing front)... The beer stuff is nearly always a little trippy.

You know I DID observe that I seem to have known the MAJORITY of these strange people for quite some time... I think we are drawn to each other.


On a few other notes:

I saw some FABULOUS blogs this week... they don't really fit with the STRANGE theme, but they still need to be recommended:

Elizabeth shared a link this week on how to write better and it is GREAT: http://latimesblogs.latimes.com/jacketcopy/2010/07/janet-fitchs-10-rules-for-writers.html

Not Hannah had a truly moving post this week on facing one of life's truly difficult moments: http://www.imnothannah.com/2010/08/tom-delay-can-kiss-it.html

And just to let you know... I am SORELY behind on typing, so this weekend I am going to take a break... I will be back Monday. Have a FABULOUS weekend!
Posted by Hart Johnson at 3:00 AM

Love this award. Grats for winning it :)

Congrats on the award. Now I have more blogs to read, I read too many already. It's a love/hate relationship.

Wales is definitely a country - we like to be individual. *grins*

Anywho congrats on the award - surely the best one there is! - and thanks for passing it along. To be termed as 'wacky' and 'bizarre' is very encouraging. *nods firmly*

But seriously! Congratulations with this lovely award! It's seriously good! And thanks for the links to these whacky and wonderful sites - I only just recently met Bonsooong and yes - he's up there with the nice fairies!

Thank goodness is what I say!

I just discovered Boonsong this morning -- very cool! I think I'll go check out "10 rules..." too.

Congratulations on your strangeness, and celebrating others strange bits! Cheers! *raises strange glass filled with strange drink to you all*

Tara-Country then! So what's Britain? *glomps*

Jenny-Yes, Boonsong is fabulous! (though I always type Boobsong the first time I type it *shifty*) you should check out all the others too!

yay! Thanks! I will add this straight away to my blog awards page

Congrats on the award. Cant wait to check out all the other links.

I thought this would prove a pleasing fact on a day of celebratory strangess. Well done, everyone, for um... being strange!

Yay for strangery! And y'know what else is yay? Now I have other strange blogs to follow. I'm especially drawn to the beer wench one. I have no idea why that is.

Strange is the new brown, oddly. Congrats to you lovelies.

I love that strange people embrace their strangeness... it makes me happy!

Mark--that is SO STRANGE. I know a certain Scotophile with a book about some McSplodges... Curiouser and Curiouser... I will have to pass that on.

Simon--be sure and carb up before visiting ET--she will wear you out in more ways than one...

Congrats on the award and to everyone you've passed it on to! Yay for strangeness!

Congratulations. You're weird in a good way, Hart.

Congrats, Hart! I adore your strangeness :)

Yay! Now we can be properly strange together! Thank you so much for this - it made me giggle - and I feel honoured to be in such strange, I mean esteemed, I mean strange company!

LOL! You're not strange... it just gets so HOT in the summertime... :D

Hart, you are the best.

I love the giraffe blog. I'll check out the others.

Thanks for the award.
This is a first for me - not being given an award, but being described on somewhere as private and intimate as the world wide web as 'strange'. Mrs Somboon has never called me strange, although she has occasionally referred to me a weird, but that's more due to my preferences than my personality.

Anyway, thanks for this much treasured and cherished award.

Enjoy your strange title! I love it; Who wants to be ordinary and mundane...not me! Pinstriped tattoo, ....be brave, show it ;-D I know, you are kidding, but I love the idea of it! So, put your suit on backwards and celebrate your freaky, unique self!

Thanks so much everyone, for the congrats, both coming in and going out!

Leigh-I'm even stranger in the cold because I get punchy when I'm cold...

Cheeseboy-I take great pride in the strangeness, too. I think that may be part of what makes us strange. Other people get mad...

Boonsong--weird versus strange is surely just a matter of perspective!

Ellie--yeah, for a nudist, a pinstriped tattoo is the only way to DO the pinstriped thing!

You won prize package B - congrats. I'll send you an email shortly.