To Amazon or Not to Amazon 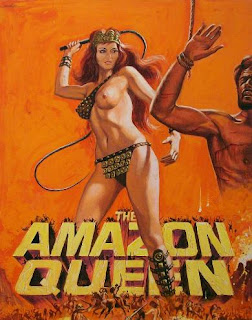 Being an Amazon Queen, one would think this was an easier decision, but I am coming up on the deadline (Monday is when it opens and it stays open two weeks 'or until they have 10k entrants', which, for all I know might be fifteen minutes in, though I honestly believe I should have all day), and I am completely stumped as to whether it is a good idea or not. I thought maybe I should do a list of pros and cons and see if it got me anywhere... and because I am contrary, I will start with the cons...

Before get on with my personal reason's though, want to point you to Helen's December Post on the topic which is much more thorough, and a better guide if YOU are making this decision than my post will be (which is limited by the issues I find relevant to my situation and my miniscule knowledge on the topic).

Good Reasons NOT to Amazon

Stuck with their Contract: Now I don't really have issues with the $15,000 set 'advance'--if the book sells more, you'll make more, so this doesn't bother me. Sure, I have dreams of a book going to auction someday (who doesn't?), but I have my doubts that I am that one writer in 20k [/shotinthedark] for whom that happens on their LONG debut novel. Somehow it even seems to jinx me more to live in the same town as the last woman to do it that I know of (Elizabeth Kostova). What isn't really clear is how the rest of their royalties are set. The current status quo on eBooks for instance seems damn unfair to authors because the cost for the physical production has gone away—it seems to me authors should get an equivalent share of the REST of the things that go into it (so 30% instead of 15% if half the current book cost goes to the physical BOOK) if you know what I mean. At the moment, the PUBLSHERS (sellers?) are getting to keep that extra.

Counter: This is only my first book-- I have lots of books in my future to try to do better with. My eggs are not all in this particular basket, and an Amazon win would be a nice resume note.


Queries out there: What happens if, right after I submit, I get a request for a full? Even requests for partials I feel obligated to disclose on (or do I? Sheesh, what's the protocol?) And I do have that partial out there (plus the requested chapter)... two requests for more are thus far balanced by only two rejections with almost a dozen 'haven't heard a peep' still looming, and by submission opening, I am only 3 weeks out. Is that enough time to give those queries their chance to work? (obviously NOT, but were they going to work anyway?)

Counter: How likely ARE these queries to work... I mean really...

Book Length: I've been wrestling my book length since the first time I finished this puppy, and I currently believe, for better or for worse, that about 80% of agents see ANYTHING longer than 120k and tune out. It's possible that I'm not getting that discrimination to the same degree now, but Amazon is a rare opportunity in being perfectly content to read such a high range of word counts. There will undoubtedly be longer books, and my long book, happens to not be as cumbersome as some long reads (at least I believe that's true).


Review opportunity: the opportunity to get feedback from within the industry is something I just haven't had an opportunity for elsewhere... sure you need to get past the first two tiers, and it's possible I won't—tier 1 is based on a pitch, and I feel like I'm getting there. Tier 2 however, is first 3k-5k words and I run up against my 'not quite fast enough first chapter' (though the criteria look like I should fare well—prose, character development... none of it mentions 'fast dive in' though it DOES mention hook) and if you pass those two tiers, you get feedback!... if you get to tier 3 you should get manuscript feedback. (in fact to ME, this might be considered 'winning'--getting this feedback but not being strapped with their contract. (though a sure thing contract is pretty darned nice, even at less than ideal terms—somehow I think Amazon winners sell at least a respectable number of books...) 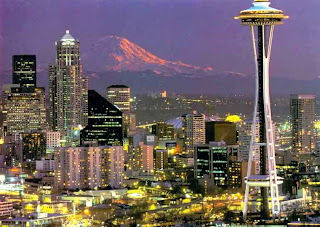 Winners go to Seattle! (I have friends and family—lots of them, in Seattle). And many more live drivable distances. This is just a fabulous opportunity for a party, should I get into that elite final group. I think though, the finalists who DON'T win are in a tough spot—Penguin gets first dibs at contract if they want it, but there is no dollar value. It is sort of hazy language to my non-legal mind—if I were to pass to this round, I definitely will want an agent maneuvering it for me.


So there I am, in a conundrum on the matter. I will probably remain in a conundrum until/unless I impulsively do something next week because I have a very hard time doing NOTHING and this contest entry is at LEAST doing something, and something that takes the whole thing off the table for a good long time at that. (which has definite appeal—being done for a while, I mean...)
Posted by Hart Johnson at 6:56 AM

I say go for it. It's not like, even if you do win, that you have to sign a contract with them - it is still an offer - unless I don't get it. It's like applying for jobs - well exactly like it because that is what you are doing. And so what if you don't want the job once it is offered. You've honed your skills getting there - you've gotten the feedback and if you win my dear -well.

I think if you win, you DO have to sign, but I suppose if you WIN, then... you WON... and that is a pretty strong position going forward.

I worry most about the tangle and timing, I guess... but honestly, the first round decision comes at about the time I would be sending follow ups if agents who DO respond haven't responded... and anyone requesting a partial or even a full now, probably goes into March before they tell me anything...

But if someone DOES request, do I SAY anything?

A request for a partial or even a full is not an offer to publish. Unless there's something in the rules that say you have to withdraw if an agent requests material, you don't have to say anything to them. At that point, if you know you're in the finals, tell the agent who's requested the partial or full. With that in mind, the agent would probably give yours a priority read so you'd know if they want it in time to take your manuscript off Amazon's table.

That's assuming you're not cutting it to tight on the schedule.

This is what I understand from AW - where you can get access to beta readers and post your work, chapter-by-chapter for other writers' feedback, btw:

1. Three weeks is NOTHING in the span of a query's lifetime. I have friends who received requests for fulls after 6-12 MONTHS of their query letter being in an agent's in-basket.

If your goal is to write as a career and obtain an agent to shepherd you through that process, you must learn patience, grasshopper. Patience.
;)

2. It is considered rude to nudge, even on full requests, before six weeks. (The only exception being to confirm the receipt of said full.)Even then, many of my friends would urge you to wait longer.

4. A good place to rejig a query letter is on AW - the aptly-named Query Letter Hell - or The Public Query Slushpile.

5. To get an idea of agent response times, check out Query Tracker.

6. This is ME placing my conservative values out there for YOU to consider, but you can always do Amazon next year. If you won, yes, my understanding is you are stuck with the contract.

If you place and get feedback, great, but I have many friends who receive personalized rejection letters that do the same for them.

So I guess I'd ask what you anticipate happening through Amazon you can't get through other routes, without the risks of being locked in to a contract?

Anyway, I apologize if these are all obvious points you've considered and discarded. I don't know what you've already attempted, after all. Regardless, I wish you the best.

Writing really is a people-growing prospect, isn't it?

I'd think just about any--legit--publication opportunity is preferable to the: query-reject-query-reject, partial-reject cycle, especially for a debut novelist. Get your work out there anyway you can. As far as "Have" to accept the contract...I should suffer so much. But, what if you decline? What's the worst that could happen. I doubt you'd be tossed in Folsom Prison.

Don't over think this.

So that is three why nots and a why...

Helen-THANKS for some of that etiquette stuff! I really needed it... so no worries until or unless I get farther in...

Jan--I find all those stats VERY interesting. My first two query rounds I didn't have those waits OR that success rate (rejections came quickly with one exception--req. for partial), but I think both query and pages fell short. This one, with interest from two right away, I figure I am much closer to the mark. I have only gotten ONE personalized rejection thus far, and really it was just that if I was framing it as a thriller, it was still too long--my solution is to not mention that thriller thing... since it is NOT genre-thriller--just mainstream with some thriller elements... probably suspense would be a better word anyway...

The novel has changed a lot from early rounds and is much cleaner (though we'll see if it's quite there yet). I've been cleaning for 16 months now though... som hopefully I'm getting there!

Galen--way to nail it on the head... I should BE so lucky as to have a contract forced on me! *snort* You got me there!

ALSO: this just in... went to the Absolute Write Water cooler and there was a comment that all ABTN winners have made the best sellers list... now THAT is something I would love to be able to have follow me forever (even if I DIDN'T make every penny I could from a book!)

I dropped back by to tell you that today I gave you The Circle of Friends award - http://straightfromhel.blogspot.com/2010/01/blogging-awards.html

Oh, thank you, Helen! What an honor!