[Not a writing blog, back to those tomorrow]

I have a history of loving Microbrews. I think it began before there WERE Microbrews. I always preferred a stronger or darker beer, compared to many of my friends, and though I drank my share of Coors Light (no real flavor at all) and Bud Light (as inoffensive as Bud gets) in college, it was STRICTLY a calorie decision. When I was not going for volume, taste always put me into Michelob Dark range.

Imagine my delight in 1987 when I first discovered the existence of a MICROBREWERY... in this case Hillsboro, Oregon—there were two, both McMenamins owned. I was with good friends... in fact it seems to me it might have even been the lost weekend that was the Dylan/Dead Concert... I'm almost sure of it... Very good friends. 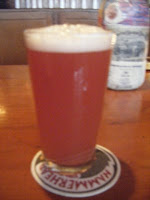 My first exposure, probably because my best friend wasn't really a beer fan and this fit her fancy, was called (at the time) Ruby Tuesday (there was a lawsuit by a stuffy east coast restaurant and the Tuesday was dropped later). Ruby, though, is a raspberry ale (actually I think it now also includes blackberries). It delighted all of us, though I tried what I now suspect was Hammerhead, also—one of the guys and I loved it—the others were rather more whimpy. 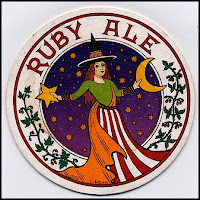 I became a solid McMenamin's fan there and then, but at the time, they didn't have a venue in Eugene, where I went to college (probably a good thing—stuck to my weekends at Renny's and Wednesday nights at Dave's—both pubs that served Bud Light--we managed to have fun anyway, didn't we Vic?) 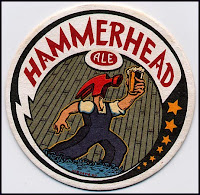 Then I graduated and moved to Portland—began working for an advertising agency, which contained mostly a mixed drink crowd. I did however, wend my way to Bridgeport... even dated a brewer briefly, though he was repressed... 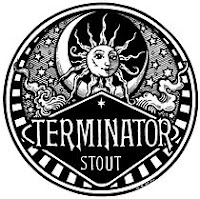 As I got my footing though, Portland is a Microbrewery haven. Whether you like the German styles and arty ambience of the Widmer Brewing, the meticulous craftsmanship and warehouse, come brewery of Bridgeport... or the playful flexibility and quirkiness of the McMenamin's... Me? I'm the playful, flexible, quirky sort (though I love all the Portland establishments, with the possible exception of the upscale, Full Sail place—I love their beer, their ambiance in Portland wasn't for me—Hood River, yes, Portland—too uppity.) But I fell in love with the the oddly high quality provided by the hippies and dead heads, with their hand painted ceilings and refurbished historic buildings.  This series of coasters gives a feel for the company.

So when I decided to break out of advertising in 1991 and was desperately sending resumes to ANYONE who might provide the path to freedom (and the hope of salvaging my soul), McMenamin's got an impulse resume. I was interviewed by one of the General Managers and told managers did the marketing, and all managers worked their way up.

I decided I wanted to go back to graduate school anyway, and maybe this was my route... She pretty much offered me whichever pub I wanted (must have impressed her *snort*--only suit she'd seen applying for a pub job) and I picked the one where I was a regular that happened to be one block from where I lived with my then fiancé.

And I became a beer expert. All employees have to learn about the beers... not a problem, I loved them. But I could then articulate what it WAS about my favorites I liked so much. Hammerhead, my favorite, is a heavy-bodied, red, English Style bitter. As a bitter, the heavy body is unusual—until New Year's Eve I hadn't found its match.

But the style of hops, the roast of the malt, the yeast—the beer purist rules... Those RULES are what I have identified as the reason I hate so many national brews—a real beer or ale ought to only have barley, yeast, hops and water. I can make exceptions for adding... spices, fruit, coffee, in the case of wheat beers, wheat... but you start adding cheap grain (rice and corn) or preservatives (Budweiser uses formaldehyde) and you lose me. I can no longer condone calling what is in that bottle a beer. I am absolutely adamant about drinking locally (or at least brewed with local intent so no preservatives are used--I confess to drinking Sierra Nevada Pale fairly often, and they aren't local to Michigan).

My preferences are still toward the dark and heavy, preferably hoppy (bitter) but that is personal. What I WILL say, is if you think you don't like beer, you haven't tried hard enough to find a micro that suits you.  Beer headaches? That's from preservatives--unless you've had 4 or 5... Beers (including ales and lagers--I prefer the former, but there are some good lagers)  range light to dark (this is determined by how the barley is roasted), bitter to sweet (some roasts of barley are 'sugary' giving sweetness, some are somewhat bitter, but most bitterness has to do with hop choice—some are mild, some are very bitter—they are all pretty—plant them!), and the creative combinations are endless.


So on Facebook I ran into a college friend last spring and saw some 'brewing' statuses, so we got to talking beer. He does homebrewing, but is also a big advocate of Eugene, Oregon's local brewery, Oakshire. When he mentioned Ill-Tempered Gnome, I was so tickled, that I think I pestered him... This fall he shipped me three (22 ounce) bottles of Eugene brews, which I rationed over my holidays.

So THANK YOU, JEFF! This next section of the beer review is dedicated to you! 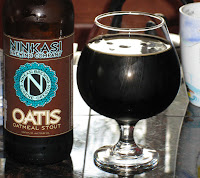 OATIS: On Christmas Eve I opened the one bottle brewed by another brewery: Ninkasi Brewery, also in Eugene, makes this incredibly rich oatmeal stout. Chocolate bouquet. A little more of the coffee malts come through with the sip—It is smooth, as an oatmeal stout should be, though more complex than I've typically had, with the heavy body and dark foam that show this is no wimp's brew. Very nice. 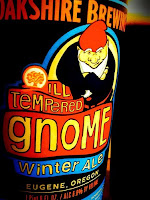 Ill-Tempered Gnome—from Oakshire Brewing. This brew wins hands down for the best named brew I've ever seen, but that is not the only way it wins. It pours as a medium bodied, dark amber. It is the first satisfyingly hoppy amber I've found in AGES—most ambers seem to wimp on the hops, and in fact I believe this one ranks with Hammerhead as an all-time favorite. But if any of you mamby pamby drinkers is ordering it to be funny because you like the name—like with Hammerhead—sorry. The good brew titles are reserved for the real drinkers. 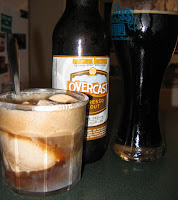 Overcast Espresso Stout—yes Leanne, beer and coffee in the same bottle (looks pretty good with ice cream added, too!). By Oakshire brewing. This has the strong bouquet and flavor, but I believe the coffee lightens the body to it a little—it actually wasn't as RICH as the oatmeal stout, though it DID have more bite. I only wish it had allowed me to telepathically bang the heads of the Buckeyes together as I so badly wanted to. (I drank it during the Rose Bowl)
Posted by Hart Johnson at 3:20 PM

Tami, you WILL love this show :)

There's 8 episodes, 30 minutes apiece, 2 parts each, and is presented by my favourite presenter :)

The rest of the show (along with just about every programme the guy's ever done short of Top Gear itself) is also on her page, just click the link to the uploader, I'm sure you'll be able to figure it out ;)

Okay, I was going to comment even before I saw the last one, but now... mmmmmmmmmmm... Do want. :-) And hey look, I got a gmail like the rest of the world so I can comment properly now. Long story. Send beer? ;-)

I'm a huge beer fan, so I'm loving this post. Love porters, honey porters, ales, stouts. Love going to microbrews, but haven't had the chance to get to one for absolute ages. We have a Total Wine here which has a great beer selection, so I get my microbrew fix from there...

Joris... will have to check a little later, but WILL check...

Leanne-WELCOME to being able to comment HERE! We'll need to rouse up an east coast coffee stout. Pyramid does one, but they are Washington state, and then this is, of course, Oregon...

Elizabeth, excellent! I love hearing your a microbrew fan, and that you like those dark, heavy ones so many people are afraid of! You know, one of these days you and I need to find ourselves in the same city and go have a couple!