[Note: Not a writing blog, and probably an over-share, but that is me… naked as always] 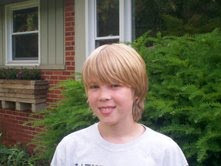 My son Sam turns eleven today. I’ve frequently looked at Sam as my reward for not murdering my husband, who at one time was sorely asking for it. After our daughter was born, a series of demons visited our lives and we spent a few very difficult years. In fact we were separated for almost eighteen months of my daughter’s first 2½ years. I wouldn’t revisit that time in my life for ANYTHING, no matter how I adored her toddler stage.

That is the era in which I learned that no matter how badly you’d like to fall apart, SOMEBODY has to stay sane… so there I was, stuck… the sane one by default. I had some tangible help and lots of helpful advice, all of it saying to walk away. You may have learned enough about me by now to know that played no small part in my determining it had to work. Don’t get me wrong. I was insistent on boundaries, therapy, taking time, working through—I even worked an AlAnon program to help sort what was my stuff and what wasn’t... but NOBODY tells me what to do. I also think my refusal to accept failure played in, as did my husband accepting that being tossed out in the first place was a reasonable reaction on my part--probably the best thing I could have done for him—once he’d gotten far enough past it, anyway. Even one hot head in such a situation dooms it. I couldn’t have ‘worked it out’ by myself.

Natalie was planned… after a couple years of taking turns being ready for a baby, by chance we were ready at the same time, tried and succeeded—first time... Sam on the other hand… in spite of coming 3 ½ years later, was an accident. We wanted another EVENTUALLY, but I was only 5 months into a new job, we’d only been back together 9 months, he wasn’t working… it just wasn’t time yet… yet I am completely confident he was the child I was meant to have. I’m not a person of traditional faith, but I believe in SOMETHING, and there it is…

Sam was almost 4 weeks early (never mind he was 7 pounds 9 oz. and 22 inches long). He was jaundiced, and fussy, didn't eat well. He refused to sleep on his back—the adamant recommendation of the day. As he got a little older he hated being away from home, throwing screaming tantrums if we were gone too long (strangers actually used to offer me help and sympathy—he was THAT miserable).

In Preschool he finally got his bearings away from home. At four I realized how good he was with numbers—his grandparents were visiting and he asked the date. Then he asked that day’s date and calculated that meant four days… math with no prompting or training. After preschool we decided on Young 5s because he was so young for his cohort… by the end he was reading, so he went to first grade instead of kindergarten. The kid is smart. 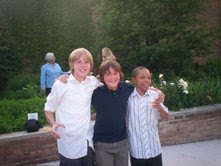 Not only is he smart, he has common sense… pacing himself with work that needs doing, getting things out of the way before going to the fun stuff. I never have to remind him to do homework, and to date can only remember once that he forgot until sort of late.

The real winner though, is his humor… it is mine EXACTLY. From very young he was into word play. He is periodically sarcastic beyond his years. I just enjoy his company. The rest of my family grumbles that I play favorites, and I really try not to, but periodically I just have to remind them that it is easiest to like someone who likes YOU—to be nice to someone who has been being nice. (my other two family members grumble and complain far more often). He gets mad and complains far less, seeks out my company even when he doesn’t want something from me MORE, and is just easy to hang out with. I know that will get to be less as he ages, that his mom will no longer be the cool company, but I have savored it, and hope after his ‘cool years’ that he comes back to it.

So what does he like? Here are some of his favorites: 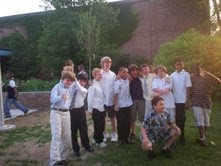 He plays trombone, does basketball, baseball and tried cross country this year. He requested I buy him ‘scent’ when school was starting because he has definitely noticed girls (and heard girls like boys who smell good). He spends a lot of time playing computer or video games, but also climbing trees, riding bikes and generally running around.

And did I mention his feet? His age has finally reached his shoe size… Seriously… he wears a men’s 11. It’s clear how much taller he is than his friends [above], but he is nowhere near done if his feet are an indication… He is already a head taller than most of his peers, some of whom are more than a year older.
Posted by Hart Johnson at 10:44 AM

Your Sam's a lot like my Dale - good at maths, likes his mum, into Darren Shan, and the 'Nicer Child'. Odd that, because we share similar daughters too, don't we?

Definitely not an overshare, Tami, it's always nice to read the real-life blogs :)

He is so *cute*, Hart! Cute and smart...maybe *don't* get him any cologne! You'll have enough girls calling your house as it is.

I'm really impressed, too, by hearing how you held it all together and figured everything out during your separation so long ago. That would be incredibly hard. My head spins just thinking about it, actually...

teehee... Yes Tara, Ellie and Natalie will rule the world one day! *snort* Glad I didn't cross too many lines... there are deleted parts, but they weren't necessary to my point...

Elizabeth, thank you! He IS handsome... and I do have some fear of the girl invasion... I know it's coming. My husband was heavily chased as a boy (and frequently caught, sometimes by girls with boyfriends, so there were several fights).

I appreciate you thinking it appears I got it together, but I really think we just do what we have to... I am wiser for it, but those are life lessons I definitely would have preferred not to have.

ROFLMAO! Oh Hart - I very sincerely commend and admire you for all that you went through and your determination, standing YOUR ground, and overcoming. But - OMG - to quote a famous movie line, "You had me at...." --- the fact that he is your reward for not having murdered your husband. I'm still laughing!

Crystal-thus far he's only half naked, but he will get there. (my modest daughter is more like her dad that way)

And I'm glad it came across as amusing... it wasn't fun, but the bad stuff really has all been left way back there... the wisdom perserveres, and I warn all those young things who are hot for Sirius... I married the guy... I know. A long and rocky road.

Happy birthday, Sam! I feel so priveleged to have met him before he gets too corrupted by all those girls ;)

You are braver than you know; and able to blog about it. What a life savior & what a stunner: happy b.day Sam. I hope he doesn't read the first few paras for a few years, but I hope he DOES get to read it eventually, so he knows what a star of a mum he's got. No wonder you 2 hit it off. My son is a little more mature in years, is presently supporting his out-of work father because I won't, while I am doing a kind of you-several-years-down the line but not nearly as well, by the looks of things. This blog made me curl up & cry. Bless you dear girl for being honest to the point of nakedness! now THAT's the tart I know & love

Thank you Mari--he was privileged to meet you too!

And Marian-I hope Sam is never in a spot to have to support his dad. We moved across country in 2000 and about 70% of the demons stayed behind. Hubby is an involved dad and in so many ways fills the gaps I am lacking as a parent. He is also in school, so some day soon will be capable of more than day labor, but it's been a long road.

Sam probably won't see this, but I am pretty honest to the degree I think they can handle. My mom never said ANYTHING difficult to hear, and I think that dooms us to make the same mistakes. My daughter's heard most of it, and Sam will eventually. I knew we were kindred spirits somehow.