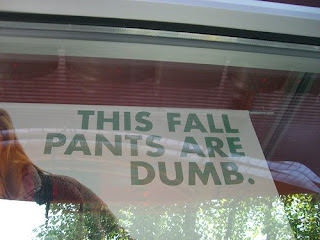 Occasionally a person will see evidence that I have been influencing events.  This sign is posted at Moosejaw in downtown Ann Arbor... proof positive that people are seeing the light.

I no longer have any children in elementary school. My younger started middle school this year, as evidenced by my attendance at curriculum night last night, complete with adults rustling in the halls trying to find the way through the maze of the basement to the art room. I have no worries about it—he is my orderly child who’s always diligently done his homework and practiced his instrument (challenges we’ve had to ride my daughter on constantly). But things like… a girl calling my ten year old to find out his home room in August remind me it isn’t just school—he is making strides in all areas of his life.


Likewise, my creative, social daughter has entered high school, complete with a sports team with a rather brutal workout schedule and the struggle between independence and wanting to be doted on that comes with the switch.

I’m getting older, too. It hasn’t escaped me that in jobs I’ve gone from the young one to the middle one to the older one—or that my social circles over the years have found me moving from the mean to the older range, and there are times it seems maybe it is time for me to grow up.

I’ve noticed a LOVELY detail that makes me feel MUCH better! Writers aren’t a barely post-teen batch of people! In networking I see a handful of twenty-somethings (mostly writing paranormal, it seems)—late 20’s and early 30’s write some Romance… but writers by and large are a more seasoned bunch.

I like it, but it’s caused me to contemplate WHY? My theories?

Takes some living to write about life. Younger people just have fewer experiences from which to draw and experiences with fewer kinds of people to really be able to objectively look at human interactions and the human condition. For domains like fantasy this isn’t a draw-back, but for realistic genres, I believe it is.

Writing takes practice. Even people who don’t start trying to write novels until they are older, have for the most part done jobs where writing was required, sometimes journalism, but ANY writing is intended to communicate, and it makes us better at communicating our tale. At the very least, they’ve written on their own.

Time gives events a context. I think my early writing fit in the single small contexts in which they were written, but without a broader view, I think it is hard to make a wide variety of others really understand and it is hard to notice some of the details we take for granted that make scenes fit so well to the story.

So I guess I am glad to have discovered I can play with kids my own age, and still have fun doing it. Not that I don’t LOVE all the younger ones I play with, but it’s nice not to always be the tallest kid in the room… if you know what I mean…
Posted by Hart Johnson at 12:52 PM

Speaking of practice, I've been trying to force myself to write lately. I've never been very good at making myself do something I don't technically have to do, so this is good for the ol' discipline. I may not have to do it, but I want to do it, if that makes any sense.

In my former life, I was a technical writer. This is good, and not so good. Good in that I got to practice communicating with the reader. However, how that happens, as you know, in fiction and Technical writing are vastly different. In particular, I was taught to, "Just tell them straight out, without embellishment, what to do, or what you're trying to communicate." Hmmm. Telling is good. Hmmm. Embellishment is bad. Hmmmm. Straight out is good. So, those can haunt my fiction if I'm not careful.

Paul- Believe it or not, jackets. There is a lady with a jacket and panties next to the sign (it is an outdoor goods store along the lines of REI)

And yes WRITE WRITE WRITE! I would advise setting a time, even if it is a short one... say half hour a day... and ALWAYS do it--if you are inspired, go longer, but never let yourself out of it. It's just a good habit to already be in when the book ideas start flowing.

So funny....I was speaking at a writing conference a month ago and called myself a "young writer." Then I had to just stand there and laugh. I'm pushing 40. But as a *writer* I feel like a baby.

Elizabeth-you DO stand out as YOUNG for having succeeded already in mystery--I almost wrote 'mystery writers in their 50s'... but then there's you!

Writing is such a different perspective from my other lives! But it is reassuring in so many ways too to have a lot of more seasoned people (I really like that way of thinking of it). It really DOES make sense that it would take a while to get there. (and that writers who DON'T take a while are qualitatively different--perhaps more seriously trained in literary writing or they couldn't succeed so early (again, excepting paranormal, fantasy and romance--the first two being SO imagination intensive and the last being more prescient) (is that the right word? I mean relevant because of timing... older people have sort of moved past romance being centrally defining for us--sure it's still NICE, but it isn't the happy maker 20 somethings imagine it might be.)

Totally hear you on this, T. Said it once, will say it again, and again and yet again. Unless you have experienced a bit of life, you really cannot write about it. You need not write about what you have experienced, but the experience has made you grow as a person and that automatically makes you a more perceptive writer.
That and the fact that the older you are, the more you have (hopefully) read. And whether a book is good or bad, you do take away learnings from it.