So for years I hardly watched TV. I had one or two shows I watched if I caught them, but I couldn't typically be bothered to catch more than my absolute favorites. But you know what? On-Demand and Netflix have been really terrible for my viewing habits. Now if I find something I like I can watch and watch and watch... and then I get hooked on these series... and then I have to wait for the new season. Which is now *sigh*

I really got more done before this happened. 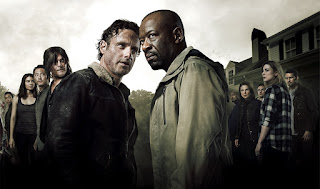 I finally decided to give it another chance this summer. I had watched two episodes before and it just hadn't actually done anything for me. I'm not a zombie fan. But the further I got in, the more it was about survival and the different sorts of people who do, and about the relationships. And the REALLY good stuff—how a crisis brings out the best in some and the worst in others so the people are often the real enemy (and how do you tell who is good and who is bad?) So now I'm glad it is back even if that gives me three shows to watch Sunday night at nine... yeah...

Doctor Who (Sci-Fi, Campy but with serious heart)

I love Doctor Who. And I love Peter Capaldi's portrayal of him. I never thought I could love another doctor like David Tennent, but I DO!

How to Get Away with Murder (Thriller-Drama)

Love this show. And it's a different flavor than a lot of my list. Viola Davis is brilliant and I love the kid who was Dean Thomas in the Harry Potter movies. 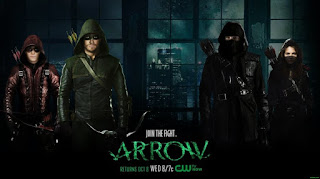 I have loved this as my only comic book show and am slightly worried what will happen as it gets more intertwined with The Flash which does nothing for me. I sort of miss the days when it was just Oliver, Diggle and Felicity. Now everyone is a superhero. That said, this season has a couple promising details, so I will keep watching.

I watch this with my neighbors and LOVED the first three seasons. I'm hoping it finds its footing again—there are only so many ways Kari can go crazy or she and Saul can be mad at each other. But I will keep going, as I like the social time and it is usually pretty decent.

Honorable mentions for Castle, Bones, and Once Upon a Time, all of which I watch, but none of them urgently—I will wait until there is a whole in my schedule, possibly even post season 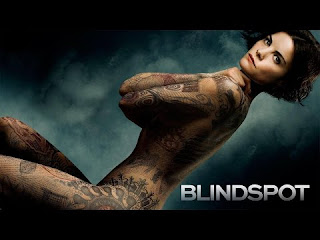 Billed as a female Jason Bourne... a woman is found naked in a duffel bag in Central Park, totally tattooed and with no memory. Turns out each tattoo is a clue for a crime that is going to be committed... It is heart pounding and I like the characters. A little worried they are going to solve each tattoo puzzle right on time with strains my disbelief but so far it has been great.

This one is time jumpy, so we both began the training season with the entering cohort at Quantico AND see 8 months later as one of the women in the class is accused (framed?) for blowing up a building. I suspect as we go through the training with her, we will WITH HER spot the clues she needs about her classmates (one of whom actually did this). It's a nice set-up, actually. A book could be set up this way and work well. 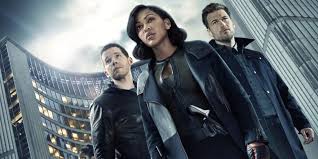 So several years ago three children with the ability to see the future (crimes in the future—they are called Pre-Cogs) are used by the government to stop terrible crimes before they happen (and arrest people before they've done anything wrong). But the kids were prisoners, held in a milk bath because it acted as a conduit to help their visions coordinate. It is eventually learned sometimes their visions DON'T line up—two agree, one doesn't (The Minority Report). It suggests the future is not always set and some of the people may have been imprisoned who didn't need to be... The children are let go to a private place where they can't pick up visions because they are so nearly alone... and for years it's fine. Flash forward a dozen years and one of them, Dash, feels the urge to do something good—to help. So he shares some of what he sees with a cop and a sort of partnership is formed... but not without complications.

This is historical fiction... some minor fantasy-ish elements (a woman called a witch who is a healer but gets some visions and some prophetic dreams). It is set in Wales at the time of William II. The King is weak and allows first a Baron, then an advisor, abuse the Welsh Village. During one of the Baron's raids the MC has most of his village (including his pregnant wife) murdered. The MC though, is healed by the witch and given a scar to disguise him as an executioner for the area. The executioner was cruel so his wife goes along with the story and he begins integrating with the village, befriending the Baroness... It is political intrigue and interpersonal drama... people forcing others to do things they would otherwise not through blackmail... that sort of thing...


So are you sucked into any TV distractions this season?

Well, I feel a bit like a drug dealer, but I would suggest "Last Kingdom", a new BBC production based on Bernard Cornwells wonderful historical fiction series calle the Saxon Tales.

Hi Hart - I do watch a few things ... but desperately try not to get caught up in a long series ... i.e. I didn't do Downton! I have just watched the Great British Menu - where successful chefs cooked the four courses for the Women's Institute centenary dinner ... I enjoy the creativity and then of course the history of the WI ... cheers Hilary

I watch Arrow and Flash. Plus Agents of S.H.I.E.L.D. Lost interest in The Walking Dead though. Excited for next season of Daredevil. Best show out there. And it's a NetFlix show.

Me too on Walking Dead. I gave it two or three first year, first episodes and walked away--alive. Then for some reason, when it came to free TV I got hooked. Now my dad is hooked also.

Tom Baker will always be THE the Doctor.

Distractions yes, but sometimes inspirations too. I have gotten ideas and quotes that lead to stories watching these distractions, so yeah--distractions, but that is on of the reason I like Hula, which allows me to watch in my own time instead of the networks to keep up with the story line fr some wiggle room from distraction,lol---dvr too.

I've probably watched too much tv lately, too - thanks netflix. NCIS, Criminal Minds, and SVU are always good. I'm on season three of The Walking Dead. Just started Season 4 GOT, enjoyed season one of The Following (James Purefoy is awesome), still watching The Fall...yep. I definitely watch too much tv. And lots of crime shows I notice. Huh. What's up with that?

Love TWD! This season looks like it's going to better than it has been lately - fingers crossed. I gave Blindspot a couple of episodes then stopped watching - it wasn't bad, just didn't grab me.

I was pretty relieved when scrolling through your list and checking them off as already having binged...until I got to the second half. And now I'll be "busy" for the next 6 months.

I'm going to catch up The Bastard Executioner. Found the first three episodes pretty good though it is really dark. I'm liking Blindspot. Minority Report lost me already. I'm into the new season of Fargo and I love Once Upon a Time as something a little less dark. The new season of Doctor Who has disappointed me so far.

I'm embarrassed about how much TV I've been watching. But hey, that's because the writing is so good! The last limited series I was hooked on was Dig--fabulous and smart. Now Sleepy Hollow is back for the season (among other favorites), but then I watch it mostly 'cause Tom Mison is gorgeous and has the perfect bedroom voice.

My t.v. viewing has come full circle now. Back in my younger days, used to watch all kinds of episodic television (I'm old enough to remember watching the later episodes of MASH as first run), but now, my t.v. viewing is strictly cable/pay cable series.

For cable, I watch some reality series, but not too many. "Deadliest Catch", "Swamp People", "Ax Men", for regular reality. A few on NatGeo, NatWorld or DIY.

And that is the extent of my episodic t.v. viewing. Everything else that I watch is based on a whim and/or what kind of mood I'm in for the evening.

We are watching Walking Dead too. Of course Downton Abbey. Z Nation is fun, has some comedic touches in it. I haven't seen any you mention except Walking Dead.

I'm addicted to Netflix. This past weekend we caught up with what's on Netflix of The Walking Dead. We're caught up on Orange is the New Black, The Unbreakable Kimmy Schmidt, Arrow, Flash, Gotham, Hemlock Grove (my Other isn't watching this one, just me), a variety of Food Network shows. We're watching Bob's Burgers, Doctor Who, and iZombie currently and I'm watching Once Upon a Time (almost caught up). I can't wait until the last season of Parks and Rec is up so I can finish it, ugh!

We don't have cable, so we're always a season behind haha ... I haven't seen one episode of Bastard Executioner, though my Other has seen two and he didn't like it much. We both really liked Sons of Anarchy though.