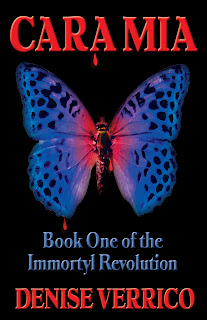 It's been a while since I've had a guest, eh? Holidays got us carried away and my organization skills, even holiday-free, leave something to be desired. Denise has been my guest before, when she released her first book, and I'm thrilled to have her back... Three words... KINKY. VAMPIRE BOOKS. Can't you just BREATHE IN how much more fabulous that is than chaste vampire books with boring heroines?
And personally, I identify so much with trying to explain to my CHILDREN what it is I write
(my daughter's boyfriend actually reads my blog *dies*) So this is SO MUCH fun! 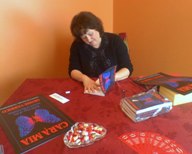 I’m thrilled to be back as Hart’s guest. I often say that I never met a tart I didn’t like. This is the one place where I know my rather skewered sense of humor can run free. (and the Tart Rejoices)

One of the women with whom I work says that I lead an interesting life. Obviously, she doesn’t know that most of my waking hours are spent at home, crouching on my sofa over a computer, looking a bit crazed like L in the manga, Deathnote. When searching for a topic for my guest blog, it did strike me that my life is a bit unorthodox compared to most women I know personally. Other women my age do crafts and volunteer at their church, while I write about vampire threesomes and watch The Venture Brothers.

I’m a major geek. I’ve seen all three Lord of the Rings films about thirty times each. I even have pet cockatiels named Pippin and Galadriel. We have arguments at our house about which superhero has the best power or whether or not there can be a black Vulcan when they’re supposed to be green. I spend a lot of weekends at sci fi cons. So, I’m asking myself here and now, is this any kind of life for a forty-nine year old woman?

My journey has always been unconventional. I’ve come to writing in a roundabout way. At eighteen, I went to college to study theater and spent four years being told I wasn’t five seven and blonde (as if I couldn’t figure that out myself). Back in those days, half-Italian was considered ethnic and all-American was in. I wasn’t much of an actress then, but I did get better later on, once I got over the burning desire to play the ingénue and realized the best roles were the character parts. I did learn a lot about text analysis, dramatic action and character development through acting. For fun, I’d write parodies of the local critics’ reviews of plays. At a party, one of my theater professors told me I should be a writer. I gave the idea a quick thought, passed out, and went on with my life upon the wicked stage.

I worked a lot backstage as a designer, playwright and director. Eventually, I stage-managed a play with a cast of twenty-one men. I figured the odds were good for me. They were. I met a wonderful young man with beautiful blue eyes and an incurably optimistic disposition. Twenty some years with me cured him. But we’re still together, suffering the slings and arrows of outrageous fortune. We went to New York together to do theater, and then Orlando Florida, where we worked for the entertainment department of Universal Studios.
My husband often tells a story of those early days at Universal Florida. He was giving a tour of the pretend back lot in the driving rain. I say pretend because they pretended that movies were made there when it was actually a theme park. At the end of the tour, he asked some women if they’d enjoyed it. One of them complained about the rain. He answered something to the effect that he couldn’t do anything about the weather. One of the women said, with a perfectly straight face, “It never rains at Disney.” Doesn’t that just say it all?

After that experiment in corporate show business, my husband decided to go to grad school in Ohio and get his master’s in directing. By this time, we had a nine-month old son. My life was like a single parent’s, working and coming home to an empty apartment with my infant. I missed performing, I missed my husband, and I was going nuts. When my son turned two and got to be a little more independent, I started writing a vampire novel. I thought, “Hah, piece of cake! In your face, Anne Rice!” Wasn’t I in for an education?
There was no Twilight then, only Rice and a few others. Who knew vampires would become the cute and cuddly teen idols of the century? Eek. Well, I learned what I could and pooped around with my first book for about thirteen years until my husband convinced me to start sending the thing around. Well, I did and after sending out four queries, L&L Dreamspell offered me a contract. So, here I am.

In the real world, I work in a second-grade classroom as an instructional aide to a child with special needs. I love my job and my student. I work with a wonderful teacher. But I write stuff that is dark and disturbing in parts and this makes explaining things to people at work interesting. When they hear that I write vampires novels, the first thing they want to know is if they’re like Twilight. I want to say, “Sure, if Edward, Jacob and Bella all got into bed together, disemboweled people once in a while, and made wisecracks as they did. Of course, I refrain. Instead, I tell them that my work is more like Buffy the Vampire Slayer meets Rome and The Tudors with a dash of sci fi. Not a lot of sparkling going on.

My mother likes to tell people that I write dirty gay books. First off, let me say that the sex in my books doesn’t begin to approach the amount in a lot of vampire novels and it isn’t graphic, but yes, my vamps swing both ways. I have scads of historical research to assure me that this was more commonly accepted in the ancient world when my vamps got their start. The sex in my series is political mostly. It’s all about the intrigue for me. I’m a big fan of historical novels by authors like Mary Renault and Robert Graves.

Remember these words: male vampire courtesan. You heard them here first. This leads me to the favorite anecdote of my writing career. In my upcoming third book, My Fearful Symmetry, I have a rather irreverent POV character, Cedric MacKinnon. He’s a nineteen-year-old Scot who finds himself chosen as an adept of the ancient arts, a devotee of a tantric cult of Kali, at the court of the chief elder of the Immortyls. He’s essentially an entertainer and courtesan employed in political maneuvers. Now, I belong to two different critique groups and couldn’t do without them. New members drift in and out. I’d missed a month’s worth of meetings this past summer and submitted a chapter online. A new member came to the next meeting and told me that he thought that a gay man had written my piece. I took that as high praise. I felt like Tennessee Williams for a moment…a very brief moment. The funniest part was when I called my friend Daniel in New York to tell him and he said, “Well…almost.”

Contrary to popular belief, I’m a middle-aged heterosexual woman. Okay, I do post pictures of pretty twenty-something men on my Facebook fan page. I’ve been running a tribute to Brit actor Nicholas Hoult lately that has my eighteen-year-old son cringing. Hey, I happen to think young Mr. Hoult would make a great Cedric. It’s the lips. Okay, the rest ain’t bad either.

So is this insane existence any life for a woman of a certain age? Damned tootin! I love what I do. It’s fun. I meet interesting people. It keeps me from feeling old, and I get to talk to fun folk like you. But the very best perk of being a speculative fiction writer is that I have an excuse to go to science fiction conventions, talk about vampire lore and buy all the Firefly and Dr.Who merchandise I crave. Even better, they let me in free! 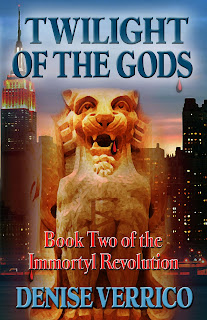 Denise Verrico is the author of the Immortyl Revolution novels, Cara Mia and Twilight of the Gods, published by L&L Dreamspell. My Fearful Symmetry, Book Three will be released later this year. She is a proud member of Broad Universe. Her books are available in print and multi-format e-book through major online outlets, including Amazon, Borders, B&N, Fictionwise, Omni-Lit, and All Romance books or may be ordered through bookstores. Signed copies may be purchased at her website www.deniseverricowriter.webs.com. You can also find free reads there. Follow her at these sites:

Interesting twists on the vampire tales. And what's wrong with forty-somethings into science fiction, fantasy, and the like? I resemble that you know!

I love that your vamps swing both ways and that you've seen Lord of the Rings a zillion times.

Kinky vampires, looks like cool stuff. Think I need to check it out. I usually enjoy unconventional stuff >:)

I really enjoyed this, Denise! I love your attitude. I also love that your approach has historic precedence... HIGH BROW kinky vampires! teehee

Yes, I tell my husband that all the time. There is a historical precedent.

Dare to be a Daniel - dare to stand alone!
Let your 18 year old cringe - there will come a day when they are pleased their ma was her own weird and wonderful woman. I know that's true.

Well you are beautifully weird.. people like you make the world a more interesting place... nice to meet you

That's so cool, I had a cockatiel called Pippin too once. Great minds think alike!