A Narrow Escape and a Plan *BWUHAHAHAHAHAHA* 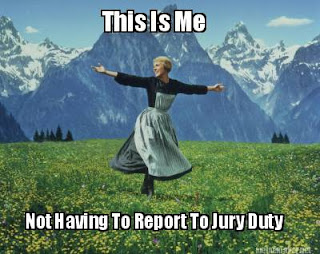 So I was in group 5 for jury duty and groups 1-7 were dismissed without ever having to show up. I confess to some small disappointment in this. I'd rather people watch than work, to be honest. Though the looming to-do list would have grown. And I have a couple students, who we call scholars because that sounds more important and all, who are at places in their projects where they need regular help. But they probably wouldn't have minded fooling around for a few days instead of working, too, though they are both winding up with us soon, so time is of the essence as they say.

But back to my missing out on jury duty... I still think this would be a fascinating experience in group dynamics. We will see if my number ever comes up again...

There is the WRITING Plan and the FITNESS Plan. And I feel safe to make them now, as we are approaching start of the school year (a natural beginning) and son leaving home (an ending that might also be the end of my wasting quite so much time)--the real thing this ending means is the end of nightly meals. I am content to eat the same thing for 3 nights in a row, which means I could just cook twice a week.

See, my husband was at home for years, when the kids were younger... then, about 3 years ago he got a full time job that runs into the evenings, which left ME making dinner. I had nearly never made dinner—he is the better cook, and more importantly, likes it better. Once upon a time I could come home and dive into social media while hubby cooked, then after dinner could come back to writing. 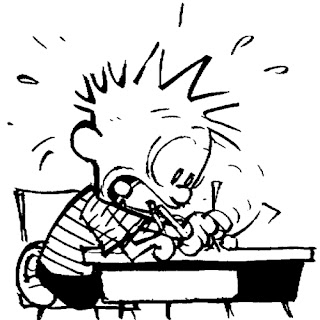 Anyway... the Writing Plan is:

And the Fitness Plan. I used to walk full way, round-trip to and from work—nearly 5 miles a day. In January I changed exercise strategy, trying to “sprint” more and I put in a bus trip in the middle of my commute. It cut my walking time in about half, which through the cold and ice was nice... I kept doing it through spring as there were no weight consequences. And now it's hot. But I think maybe my body has had the break it needed so that adding on walking again might give me a bump.

As for those sprints, I didn't keep them up. They were hard. I know. Whiny baby. They also didn't seem to do much. What I think might be the better focus is just to get strength-building in there. I plan to do 10 minutes a night, after work before dinner, alternating core and extremities by day.

Anybody else thinking about plans?
Posted by Hart Johnson at 3:00 AM

Yes, I'm thinking of plans. I have let almost every single discipline lapse in the last month - really, since we came back from Cuba. I am not doing my Buddhist practice that I'd kept steady for a year and a half (this last run), my writing, my walking - nothing. I was working, coming home and crashing. Oh I managed to get the first leg of my query plan going (six out) but I meant to keep them flowing out until something flowed in. Something has flowed in but I think until it moves to the next step I should still be trying. I did an anti-inflammatory diet for 20 days - lost 12 pounds but it didn't stop the pain in the least. I have been doing Essentrics which I think is fantastic, but had to stop when the pain got too bad. I leave in four days for a three week road trip so all of it will go kablooy again. So my plan will start September 1st. Writing on new book, querying Bright Angel until it is sold, exercise and reasonable diet. Thanks for the nudge, dear Tartlette. And your plan sounds wonderful - I know you'll do it. As I tell the families at the treatment centre, when you fall down - get back up. Just like toddlers do until they master the up!

Cook stuff on the weekends and toss in the freezer. Then you'll pull out each night just what you want to eat and not have to make anything.
Stick with your plans, Hart!

A good set of plans, Hart. You and Jan have me thinking I need to make some plans to get better organized.

Leftovers are your friends!

It is so hard to exercise when it's hot! I try to get myself up and out early in the day for a bike ride or a walk. Otherwise, I stick to indoor stuff, like the treadmill. Boring, but it works.

I always have plans! LOL Do I follow those plans...? Fitness is hard in the heat. August will be harder. I'm having to shift the times and some of the stuff I do so I don't end up with heat stroke. Good luck to you.

Plans and I have never been very compatible. I make them and they ridicule and mock me. They are mean to me.

Hi,
Nice meeting you Hart and thanks for sharing about your plans. Yes, I do have plans. Some times I have more on my plate than I can fulfill because of the plan that I've developed. But I'm going to stick with it. It helps me focus in many ways on what I want to accomplish.
All the best.
Shalom aleichem,
Patricia

My plan is so simple it's complicated. Do everything else in between freelance writing which pays the bills. Yup, perfect plan. I like your plans and wish you all the best.