Sorry for not blogging last week. I was mostly Wri-Moing, but also this...

It was a very draining news week. The sort that put me into a couple totally unexpected arguments with people. I try not to get too political here, though I have very strong views and sometimes can't help myself. Easier to not do it if I am just not here...

But I do have some stuff to say. The world feels truly scary right now. Terrorist attacks, sure. They are horrible. But also this mood of people wanting to close themselves off. The waning trust. The intend for isolation.

Trump wants a Muslim registry (hello, Hitler)
Cruz says we can take in refugees if they are Christian (does he know the US religious history?)
37 governors (in spite of no legal right) say “no refugees here”...

And then I saw this.


These guys were found by the FBI, intent on blowing up black churches and synagogues. And it got me to thinking a couple things.

1)  The terrorists we grow in the US are significantly more numerous than any risk of someone from outside coming in to hurt us.
2)  These terrorists are the EXTREME of Xenophobia. They are trying to kill people who aren't LIKE them.
3)  This means by US getting all paranoid about Muslims and refugees we are behaving more like these people who are a far bigger threat to us than the Muslims or Refugees in this country will ever be.

The terrorists in France? ALL European nationals. That dropped passport was done intentionally because ISIS wants us to do exactly what we are doing. Panic and refuse the refugees a safe place. Because see... those refugees are running from ISIS. Nice trick, and we are falling for it.

I ran across a conversation on Facebook (a couple actually) about when it was reasonable to “go in and blow them up” and this is what I have to say about that.

Go in WHERE? ISIS is not a place. It is an ideology of people who are scattered throughout the world. Malala says it best: 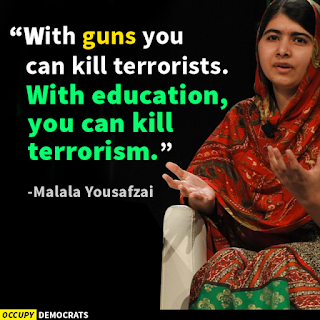 The cost of “going in and blowing them up” is this—too many innocents and not enough of the actual bad guys, which means we activate a whole bunch of NEW extremists... we GROW them.

The only way to do this is embrace, befriend, support and love the NON-extreme people of the world, regardless of religion or race. Be inclusive. Allow them to be self determining and help them when extreme groups try to force something on them. Nothing has promoted these extreme views as much as our own fear of socialism and interference we have conducted in defense of our capitalist agenda.

See. I'm not very good at not being political sometimes. That said, try to keep in mind people come by their views sincerely. People are afraid and saying things and wanting things out of a place of fear, not because they are evil. Give your friends a break if they disagree. Talk about it, but do so calmly and with a goal of greater understanding.

I passed 45 K for NaNoWriMo, so that is cool... about ready for the final big action sequence.


IN OTHER OTHER NEWS

I wish all my US friends a very happy Thanksgiving! May the universe grant you much to be thankful for.
Posted by Hart Johnson at 3:00 AM

It has been a scary week, for sure. It's easy to be distracted by what's going on in Europe (and imagining it here) and not paying attention to the homegrown threats.

Congratulations on the NaNo totals!!

'Voice of reason' is apparently an archaic concept these days.

So true!
The homegrown terrorist is much more likely!

Despite it all may we all have a
Happy Thanksgiving!

Congrats on your NaNo word count. The answers to peace in the Middle East are probably too complicated for the world political climate of today but turning our back on people who need our help will never be the way.

ISIS is a threat everywhere, but the knee-jerk reaction against Muslims isn't going to make a bit of difference.
In a nutshell, there are just too many crazy idiots in the world right now.

We need to stop spending so much overseas to fight wars and whatever else we are doing in other countries.

We don't need to be footing the bill for anyone coming to this country either. My biggest problem with many of the immigrants these days is their unwillingness to adapt to our culture and assimilate. Why should American taxpayers pay to tend to millions of illegals and those who come to our country with the desire to change it?

Maybe we need a period of isolationism to a certain degree and an evaluation of what our current immigration situation is as well as whatever homegrown stuff might be going on.

There's nothing xenophobic about wanting to retain our traditional values and having a sense of nationalistic pride. Besides my wife is an immigrant who paid a lot of money and took a lot of time to come to the U.S. and become a proud American citizen. Now she works hard within the system and doesn't flaunt her heritage as though it's better than that of the U.S.A. It's not fair to those who play by the rules and obey the laws to show favoritism to those who leech upon our nation and want to impose their value systems upon us.

Also, we have to be aware of agendas--they are not always conspiracy theories. There is a history to support what certain agendas are attempting to accomplish.

Arlee Bird
Tossing It Out

There is a lack of nuance in most people's thinking these days.

Congrats on the NaNo word count!

I'm not sure having your views ingrained on you by your parents is "sincerely." Mostly, people come by their views by never thinking or thinking about them. They just accept the things around them without questioning. That's not sincere; it's just lazy.

I agree with everything else you said, though.

I completely agree with everything you said up there, Hart. The world is a scary place, because of all this xenophobia and hatred (from radicalized white people like your church bombers there, as well as from the other radicalized people). And yes, idiot white people are playing right into ISIS's hands. Good job there. It's happening in Australia too - it's a very depressing sight to see, however it's not at all surprising to me.

Hi Hart - I too completely agree with you ... it's the people who have education, who have the possibility of having a comfortable home who do not need to have such radical views - their views are almost always completely without thought - sadly so many of us lack the knowledge, but we do think about things, and we don't over-react ... Malala's words are wonderful to read ... and we are going to get refugees and immigrants - they are helpful to our world, and provide jobs for many ... we are all human.

I hope leaders with tempered views and who exhibit true leadership come through, who will guide us all ... as we can live together in harmony and have done so so often in other eras, as well as today - til a huge challenge gets thrown into the mix ... we must live in peace and harmony and accept all common sense ideas ... great post - cheers Hilary

I am alive. Thank you Universe! You made some excellent points here and I love that you said just blowing people up will not solve terrorism. Agree 100%.

The news from Colorado this last week added to the news about terrorism--the nutjob who attacked a Planned Parenthood and killed three innocent people. What the hell? When I was in college and for a few years afterwards I and my friends went to PP for birth control and/or just for medical checkups, 'cause none of us could afford regular doctor visits. Yet now PP clinics are so controversial they're built like fortresses because our American home-grown terrorists are attacking them.

You may not be political but what you said here was extremely well said. Thank you.

Excellent blog. I like the points that you make about worrying more about the terrorists already here.

Too many people try to find the quick and easy way of solving the problem. Too many politicians don't want to have to exercise their brains any more.

Umm… wow. Not sure what to say in response to this post. I wholeheartedly agree. Great post!

… And congrats on your NaNoWriMo word count! Did you make it to 50K?

Completely and heartbrokenly agree. I started to get involved with your (very well thought out) question on fb but started to get too pissed off at how it was hijacked and deflected, so stopped! You are one of the reasons I will continue to believe your country can remain a force for good. When I hear that a true xenophobe like trump has an actual chance at presidency I remember there are still islands of clarity south of our shared border.
Smooches.